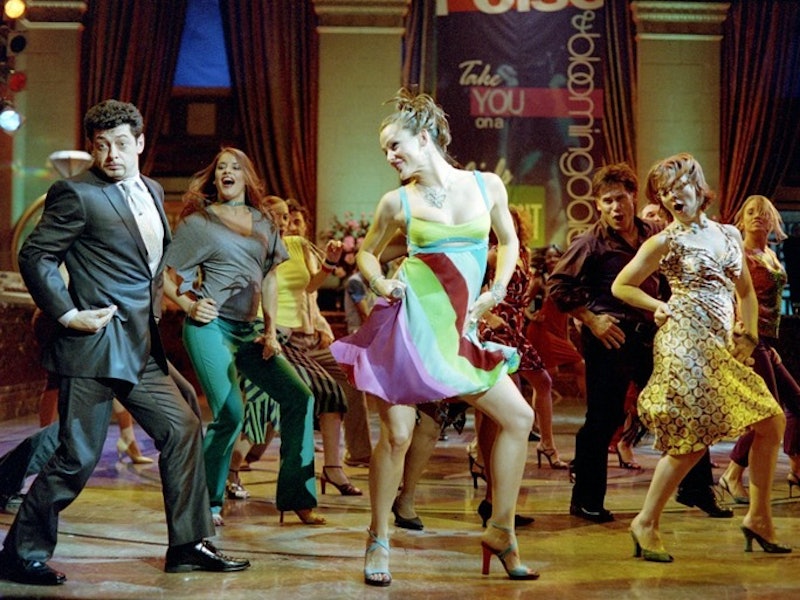 Social media has provided its users a wealth of opportunities over the years that it's been in existence, but there are some things that would simply be better off without it — such as plenty of classic films. For many movies, adding social media into the mix changes the dynamic of everything in a negative way, especially when it comes to romance. Just look at one iconic '00s movie, 13 Going on 30. In 2004, when the film came out, social media hadn't quite made a splash which is lucky because social media would have ruined 13 Going on 30 .

Starring Mark Ruffalo and Jennifer Garner, the movie was one of the cutest rom-coms of the early '00s. It captured the dream of every 13-year-old girl who dreamed of being older and living in the big city, and it was pretty much a perfect movie — especially because it didn't have anything to do with social media. The movie's fantastical storyline was amazing, but I can't help but think that if Facebook, Instagram, Twitter, etc., had existed, this film would have been completely different. What made this movie so endearing was the innocence and naivety of its main character, Jenna Rink, and social media would have taken that away. Here are 11 times that social media in 13 Going on 30 would've completely damaged the film.

1. Jenna Discovering Who She Was

If social media had been around during this movie, Jenna would have had a much easier time figuring out who her 30-year-old self was. All she would have to do was take a look at her Facebook and Instagram to see her friends, interests, and photos, and then boom, movie over.

Jenna finding her long lost childhood best friend was probably the cutest part of the whole film. But if social media had existed, she probably would have just stalked him online before she ever found him, and decided to call it quits way before they actually reunited.

If the characters had the ability to use Twitter and could've reached out to people easily, then Jenna could have saved her company party from being a disaster without the use of a giant group dance session to "Thriller." But that would have been a mistake, because this scene is the best.

Let's be honest, inviting 13-year-old girls to your house for a sleepover is very strange for a 30-year-old woman. I'm sure one of the girls would have posted about it on social media and gotten the police sent to Jenna's house.

Teens are way too busy these days to sit around sprinkling wishing dust on things. Jenna would have been too distracted with Instagramming pictures of the house Matt built her to play with the dust.

Another moment that would have been ruined thanks to Instagram. The location in this scene would've been too perfect not to post a picture of, and the snap would certainly have killed a perfectly sweet occasion.

If Jenna could've used social media, she definitely would've found better photos to post on that board she brought into the office for her big photoshoot idea. Her bosses maybe would've had to add a couple of hashtags, and it would've been way too organized to look natural; we wouldn't have gotten that sweet leaf in the wind moment that makes the real shoot so special.

8. All Of Jenna's Outfits

Had Jenna been able to look at her social media profiles, she would have known that she was not a person who would wear all of those bright colors together. Sadly, that would mean that iconic green dress would have never existed.

9. She Wouldn't Have Fallen In Love With Matt

Not because he wasn't an amazing guy, but because Jenna probably would have seen all the posts about her awesome hockey playing boyfriend on Facebook and Instagram, and decided against ruining her relationship for Matt. I'd like to believe otherwise, but Man Crush Mondays are a powerful thing.

10. The Epic Doll House Matt Made

What Matt made for Jenna was sweet and totally believable, but I'm sure he would have had even greater success with the use of Pinterest. Sadly, I think using the site would have also made his project a bit too showy and much less thoughtful.

11. The Entire Plot Of The Film

Many of the movie's cliffhangers would have been solved by one simple check on Jenna's social media accounts. This movie wouldn't have needed to go on past her turning 30 if she had just checked Facebook.

This is a great film, and for one of the first times ever, it made me thankful social media wasn't popular when it was filmed. Otherwise, fans may never have known the power of a group doll house, a Michael Jackson song, or years-old wishing dust to heal any wound.