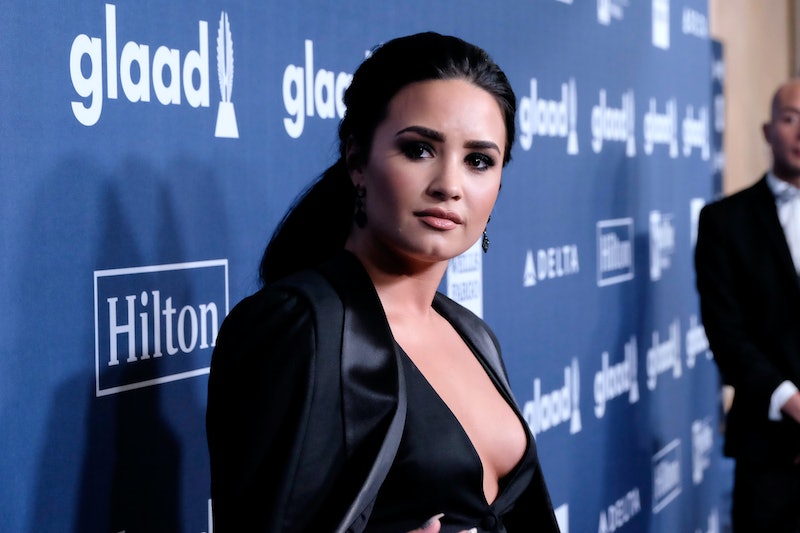 Demi Lovato is not too cool for this summer. In fact, she's ready to put her stamp on the summer charts once again! However, in comparison to last year's sexy single, "Cool For The Summer," this summer her radio hit is sure to be more family-friendly. Demi Lovato has a song on the Angry Birds soundtrack, the family film hitting theaters on May 20. The film is going to follow the characters from the popular mobile game and work to explain "why the birds are so angry." Aside from the classic music you're used to hearing while playing the game, now Lovato will be getting in on the musical action as well.

While the song doesn't yet have a title or an official release date, Lovato did assure fans via Twitter that there is something on its way come May. Considering the fact that the Angry Birds film is rated PG, we do know that the song is probably going to have more the kid-friendly, get-up-and-dance vibe that Lovato can certainly pull off when she's not too busy proving to us just how incredibly confident she is in her own skin. (Just another day in the life of a role model like Lovato, you know how it goes.)

This is not the first time that Lovato is recording a single for the soundtrack of a motion picture. In the past, she produced her own version of the song "Let It Go" from the Oscar-winning feature, Frozen, and she even produced the single "Heart by Heart" for the popular YA book-turned-movie, The Mortal Instruments: City Of Bones. Otherwise, her Disney days releasing music through the help of Camp Rock and Sonny With A Chance perfectly prove that she has the perfect rocking sound you just know is going to mesh well with Angry Birds.

Lovato's single for the soundtrack may not be the only one on its way either. While nothing has been confirmed as of yet song-wise, it has been announced that singer Charli XCX will be voicing a bird named Willow in the animated feature. Otherwise, other stars connected to the movie include Blake Shelton and Saturday Night Live alums Maya Rudolph, Bill Hader, Jason Sudeikis, and Kate McKinnon. Lovato stands out among such star-studded names, because she is one hell of a hit maker, whose song on the soundtrack is sure to be the standout there. But does "stand out" mean "song of the summer?" Only time will tell. All I'm saying is that, if anyone was going to make the song of the summer out of a soundtrack hit, it would be Demi Lovato.

More like this
Demi Lovato's New Song "29" Hints At Their Age Gap From Ex-Boyfriend Wilmer Valderrama
By Jake Viswanath
Shakira Joked About An Early 2000s Video Of Her First Camera Phone Encounter
By Stephanie Topacio Long
Revisit 1992’s 'A League Of Their Own Cast' Photos After The New TV Series
By Grace Wehniainen
At 28, Lesley Manville Was Acting, Picketing, & Singing Kate Bush Songs
By Olivia-Anne Cleary
Get Even More From Bustle — Sign Up For The Newsletter