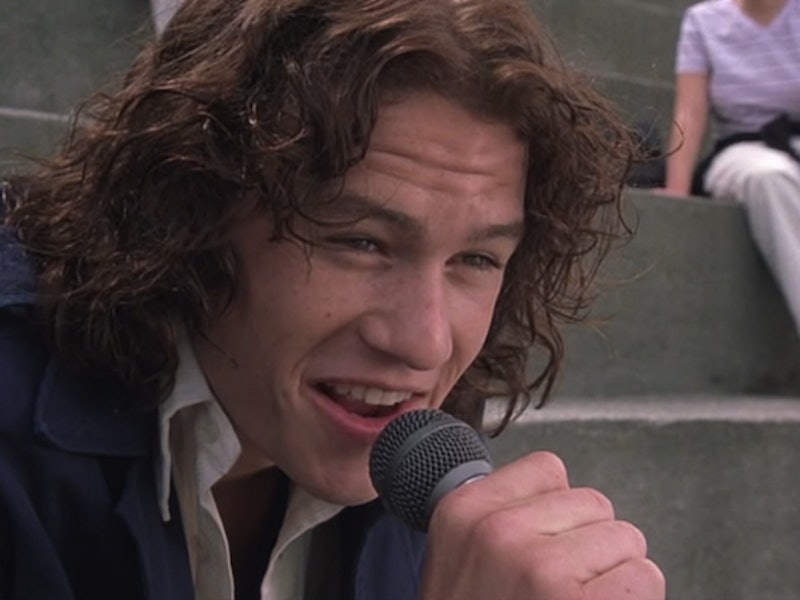 I have a love-hate relationship with 10 Things I Hate About You . I love it because it is easily the best 1999 teen movie entree, which is pretty impressive since 1999 was a big year for teen movies. I hate it because Patrick and Kat’s relationship makes me feel pretty certain I’m going to die alone. What can I say? Heath Ledger as Patrick Verona makes for indisputable the best teen movie boyfriend a girl can (dream to) have.

I mean, you can cling onto the dreamboats of the ‘80s like Lloyd Dobler or Jake Ryan, both very different (yet still important) breed of teen movie love interest. Patrick, however, was easily the best of the ‘90s set through virtue of his bad boy appeal and roguish charm. Yes, if you saw someone in biology stab a frog with his switchblade you’d be a bit concerned, but Patrick made up for his more unsettling behavior. He took care of his sick grandpa for a year, guys. Why wouldn’t you want a guy like that at your side? You know, even if you are somewhat distrusting and tempestuous.

Unconvinced still? Here are all the reasons that Patrick Verona is still the ultimate teen movie boyfriend.

1. He Has An Edge You Can Cut Yourself On

Didn't you hear? He once sold his own liver on the black market for a set of speakers. Alright, just kidding, but Patrick definitely can work the rebellious angle without phoning it in.

2. He Is, If Nothing Else, Persistent

I mean, never mind if he's being motivated by money or not.

Even though taking part of the bet thing was kind of sleazy (I mean I'm just saying) nobody can fault him for churning out a profit the way that he did. He's an unexpected financial wizard, tbh.

4. He'll Take Care Of You When You're Drunk

If God forbid you fall victim to one too many tequila shots, Patrick will be there to ensure you won't, you know, casually fall into a coma.

5. And He Would Never Take Advantage Of You In Your Inebriated State

It's just not the kind of guy he is.

6. This Hair, If You're Into That Kind Of Thing

The length is glorious, I just think that it could use a little less gel.

7. His Eyes Have A Little Green In Them

So dreamy you want to vomit.

8. And That's Probably The Best Smile To Ever Exist

It's really where he gets to flex his sensitive side.

Semisonic will play in the background and everyone around you will be next level jealous.

12. He Will Serenade You In Front Of The Whole Goddamn School

And throw in some high kicks to boot.

Or bass, or a drum kit, or you know, the electric triangle.

Sigh. We love you, baby.

More like this
12 ’90s Movie References You Missed In 'Do Revenge'
By Radhika Menon
Are Quality Time & Gift-Receiving Love Languages Compatible?
By Lexi Inks
The Differences Between Polyamory & Open Relationships
By Lexi Inks
Help! I'm Not Getting Any Attention On Dating Apps. What Can I Do?
By Sophia Benoit
Get Even More From Bustle — Sign Up For The Newsletter