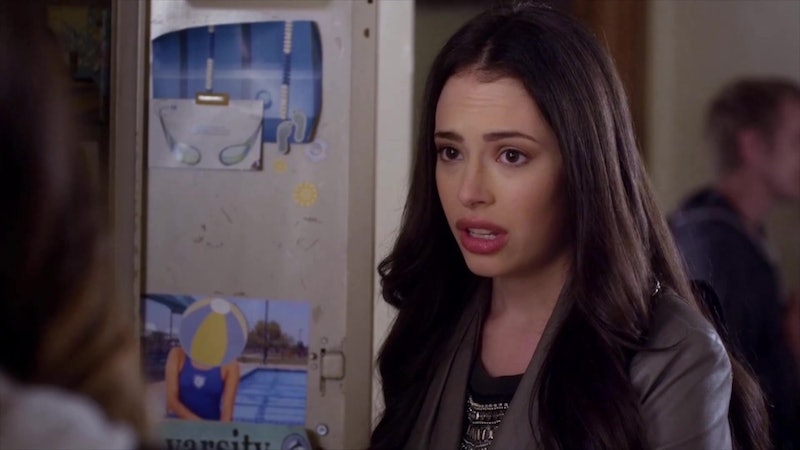 Considering that Pretty Little Liars is an intricate mystery-drama that features four lead characters, it's no surprise that the series has introduced us to a fleet of red herrings. Without these extraneous characters walking around Rosewood exuding an air of shadiness, we might have pinpointed the real Big Bads a lot earlier than we would have ever wanted to. And really, what fun is that? While you may have gotten a real sense of achievement from finding out that Charlotte was Big A long before the series told us so, it's all of the other characters that we suspected that made the journey to discovering her identity all the more fun. Of course, while that might be the case, I can't help but think that some Pretty Little Liars characters were, well, totally useless, save for their ability to divert our attention away from the Really Important Things.

A useless Pretty Little Liars character doesn't necessarily equal an unlikeable one. There are plenty of fun, interesting characters who, had they been plucked from the action of the series, wouldn't have actually changed the narrative all that much. So who ranks as the most useless of all Pretty Little Liars characters? Here are just a few characters that while we may have liked at the time, we definitely didn't need.

Talia was Emily's love interest for a few episodes in Season 5, until Emily found out that she was married and "experimenting" with women on the side. Talia's storyline sounds more interesting on paper than it actually was, and though she had a few sweet, honest moments with Emily, she mostly just took up the space Alison and Paige could have filled instead.

Sydney was Jenna's friend who gathered intel on Emily and the other Liars after Ali came back to Rosewood. She also acted as Jenna's doppelganger for a brief moment, though the reason why was never entirely clear. Jenna didn't appear on Season 6 of the series, and neither did Sydney. While Jenna might make a triumphant return to Rosewood, it doesn't seem likely that her pal Sydney will be along for the ride.

I feel like I'm betraying the entire Haleb ship for saying this, but I was totally into Hanna and Travis for a brief moment. (Hey, Caleb was on Ravenswood! He wasn't coming back!) Travis gave Hanna someone to kiss while Caleb was away, but when he finally returned to PLL, Travis mysteriously vanished. Verdict: cute, but useless.

Jonny, the dude that Spencer briefly macked on when she was feeling insecure about her relationship with Toby, was pretty much the worst. He nearly got Spencer arrested for graffitiing a roof at Hollis (in the name of "art" and "freedom" and blah blah blah) and then proceeded to leave the show for good. If you're going to take shots at the Spoby ship, at least make it mean something.

Dean was Spencer's sober coach, so technically, he did serve a purpose. Frankly, Dean and Jonny could have been interchangeable in what they brought to the table, which was teaching Spencer to chill and showing the cracks in her and Toby's relationship.

Ah, yes. Another inappropriately older love interest for one of the Liars. Lorenzo was Ali's love interest and police officer working on the Charles DiLaurentis case, but he didn't exactly spark with viewers the way he did with Ali. Lorenzo is still working for the Rosewood P.D., so there's always a chance that he'll come back and be a little more relevant, but right now he's more of a blip on the PLL radar.

I'm still a little confused as to why Cyrus was lurking around Rosewood, pretending to be Ali's kidnapper. Really, his role on the show could have probably been replaced by a few really good lies on Ali's part, even if the scene where he stabs Ali shows us a whole new layer to Ali's character.

These characters may not have mattered, but hey, at least we know for sure that these guys aren't Uber A — and we need to cross as many names off of our list as possible.