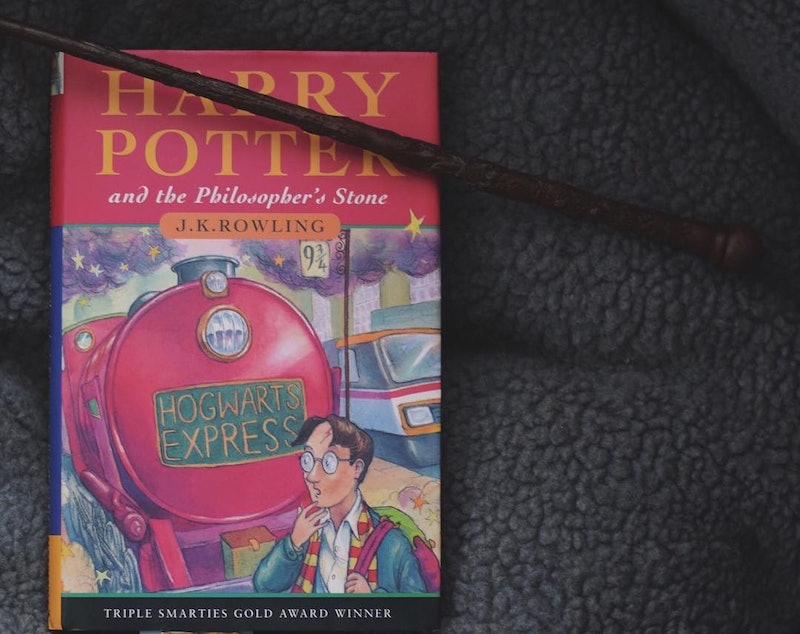 If J.K. Rowling's bestselling fiction series is about anything — other than magic, friendship, and growing up, that is — Harry Potter is about redemption, and the power of the choices people make. Each of Rowling’s beloved characters, from the smallest of roles, like that of Regulus Black, to frontman Harry Potter himself, fail one another time and again, and always manage — through bravery, honesty, and Dumbledore's favorite virtue: love — to redeem themselves, and make things right with those they care about. (I mean, be honest: you totally forgave Professor Snape every one of his failings once you learned his tragic tale of unrequited love and heartbreaking loss. Amirite?) Even Voldemort — the most nonredeemable of villains — is offered a (small) chance at redemption at the very end of the series. Sure, there was little doubt he’d refuse the opportunity, but the message was still clear: even the most troubling of characters can be redeemed, if they finally manage to start making the right choices.

1. “Your mother died to save you. If there is one thing Voldemort cannot understand, it is love. He didn’t realize that love as powerful as your mother’s for you leaves its own mark. Not a scar, no visible sign… to have been loved so deeply, even though the person who loved us is gone, will give us some protection forever.”

2. “Get to that Snitch before Malfoy or die trying, Harry, because we’ve got to win today, we’ve got to.”“So no pressure, Harry,” said Fred, winking at him.

3. “You will find that I will only truly have left this school when none here are loyal to me. You will also find that help will always be given at Hogwarts to those who ask for it.”

4. “I want to fix that in my memory forever,” said Ron, his eyes closed and an uplifted expression on his face. “Draco Malfoy, the amazing bouncing ferret…”

— Ron Weasley, Harry Potter and the Goblet of Fire

5. “From that moment on, Hermione Granger became their friend. There are some things you can’t share without ending up liking each other, and knocking out a twelve-foot mountain troll is one of them.”

6. “Well?” said Professor McGonagall, rounding on him. “Is this true?”“Is what true?” Harry asked, rather more aggressively that he had intended. “Professor?” he added in an attempt to sound more polite.“Is it true that you shouted at Professor Umbridge?”“Yes,” said Harry.“You called her a liar?”“Yes.”“You told her He-Who-Must-Not-Be-Named is back?”“Yes.”Professor McGonagall sat down behind her desk, frowning at Harry. Then she said, “Have a biscuit, Potter.”

7. "…The next second, Dudley was dancing on the spot with his hand clasped over his fat bottom, howling in pain. When he turned his back on them, Harry saw a curly pig’s tail poking through a hole in his trousers."

8. “Remember, if the time should come when you have to make a choice between what is right and what is easy, remember what happened to a boy who was good, and kind, and brave, because he strayed across the path of Lord Voldemort. Remember Cedric Diggory.”

9. “Harry Potter survived, and the Dark Lord’s power was broken, and it was a new dawn, sir, and Harry Potter shone like a beacon of hope for those of us who thought the dark days would never end.”

— Dobby the House Elf, Harry Potter and the Chamber of Secrets

10. “It matters not what someone is born, but what they grow up to be!"

11. “Don’t you see? Voldemort himself created his worst enemy, just as tyrants everywhere do! Have you any idea how much tyrants fear the people they oppress? All of them realize that, one day, amongst their many victims, there is sure to be one who rises against them and strikes back!”

12. Ron’s ears turned bright red and he became engrossed in a tuft of grass at his feet, which he prodded with his toe, “He must’ve known I’d run out on you.” “No,” Harry corrected him. “He must’ve known you’d always want to come back.”

― Dobby the House Elf, Harry Potter and the Chamber of Secrets

15. “Give her hell from us, Peeves.”And Peeves, whom Harry had never seen take an order from a student before, swept his belled hat from his head and spring to a salute as Fred and George wheeled about to tumultuous applause from the students below and sped out of the open front doors into the glorious sunset.