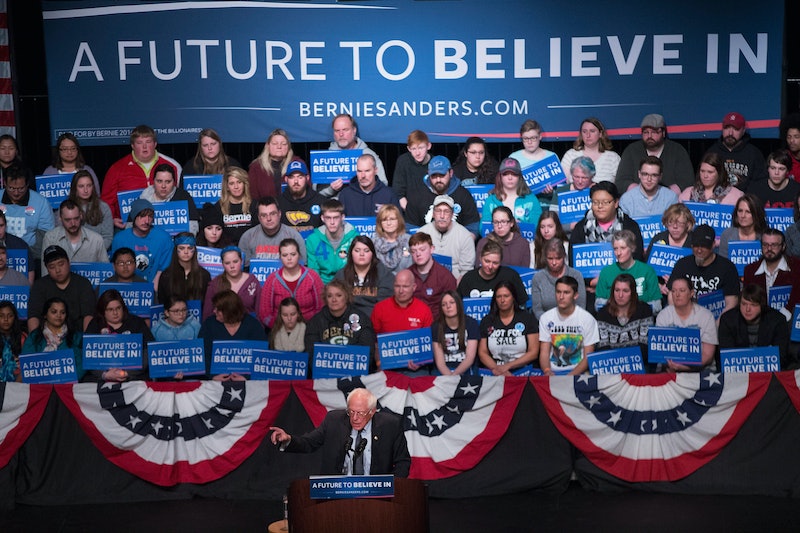 By now, it's fairly well-known that Bernie Sanders is not about the one percent. After two Bernie Sanders' supporters, Sarah Griffith and Natasha Losada, had had enough of establishment candidates' exclusive donor events, they created their own event for Sanders called "Dine With The 99% For Bernie," which contrasts his small donor base with Hillary Clinton's more elite support base. So how can Sanders' supporters find a "Dine With The 99" event in their vicinity? Since the advent, "Dine With The 99" gatherings are in the planning stages across the nation to raise money for Sanders in honor of his overarching platform — campaign finance reform and grassroots mobilization.

The events will be held April 15 to 17, and a map presents itself to visitors of the "Dine With The 99" website on the very front page. This map is interactive, with pinpoints on the locations of events around the country. If there's not an event nearby, the website gives the option to register and host an event. The best part of these events is that undecided voters are also encouraged to attend; the only requirements are a positive attitude, some type of food, an optional small donation (the encouraged donation for those who can afford it is that magic number of $27), and a distaste for big money in American elections. The motivation for this is that Sanders' campaign is about inclusion, and these events should accurately portray a microcosm of America.

One of the founders, Losada, wrote on the Facebook event:

WE THE PEOPLE are tired of big money buying our elections. Bernie does NOT need a fundraiser with millionaires, because he has millions of supporters willing to contribute small amounts to his campaign!

The notion behind these events is that people across America can also mobilize to support a candidate. Instead of giant fundraisers that cost hundreds of thousands to attend, regular Americans can hold affordable potlucks. To make a donation, individuals can do so using their phones or laptops. These donations are made directly to the Sanders' campaign, and not potluck organizers or attendees. The website specifies the proper format for these events:

Potlucks, BBQs, buffets, pizza parties, picnics in the park, or virtual gatherings will all work! Some people have even thought up Farm-to-Table: buying and sharing food at their local farmers' market . What better way for us to show our support than to come together promoting Bernie's message of unity: "Not Me, Us!"

In other words, keep it casual! Bear in mind, these events are not necessarily intended to raise funds; instead, the idea is to gather support for a candidate who promotes unity and a fair chance at the American dream.