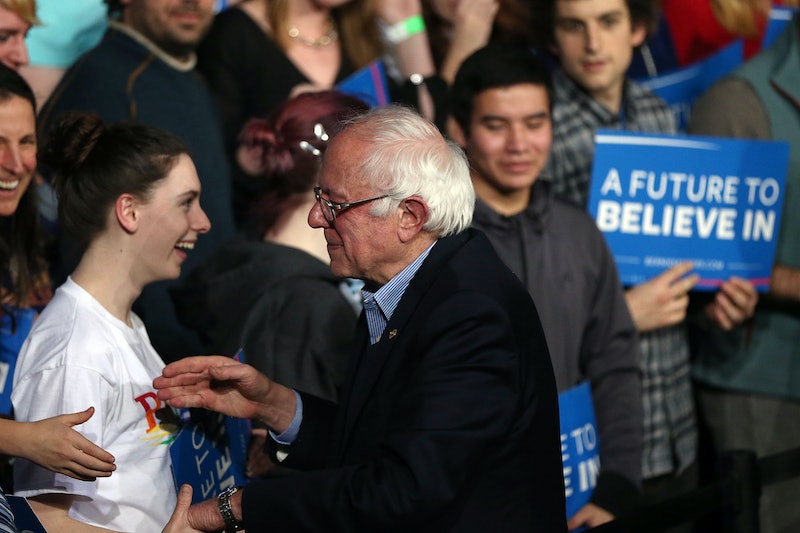 Hillary Clinton supporter and renowned actor George Clooney is teaming up with Clinton in April for two big-money fundraising events in California. One event will cost one couple $353,400 for a seat at the table with the two, and the other a more "modest" $33,400 to dine with the Clooneys at their mansion in LA. One Bernie Sanders supporter, Natasha Losada, took the opportunity to start an event for Sanders that emphasizes one of his starkest contrasts with Clinton: His campaign is run almost exclusively on small donations. Losada, running with the original idea of her friend Sarah Griffith, began the "Dine With The 99% for Bernie" Facebook event to raise money for Sanders while staying true to his message of campaign finance reform and grassroots mobilization. Losada wrote on Facebook:

WE THE PEOPLE are tired of big money buying our elections. Bernie does NOT need a fundraiser with millionaires, because he has millions of supporters willing to contribute small amounts to his campaign!

The idea is for people all around the country to hold potlucks that anyone can afford to attend. Everyone is asked to bring a food item and to make a donation to the Sanders campaign. Losada emphasized that donations should be made by individuals on their phones or laptops directly to the campaign, not given to potluck organizers, saying the event is a "movement of individuals" as opposed to a bunch of fundraisers.

The "Dine With The 99%" event emphasizes flexibility to make the gatherings as accessible as possible. The potlucks are scheduled for any time between April 14 and April 17 (the Clinton-Clooney fundraisers are taking place April 15 and 16) in order to accommodate different work schedules. Losada recommends requesting that attendees make a $27 contribution to Sanders -- a number that has particular significance for the campaign, since it is the average amount he has received from each contributor. However, she notes that smaller amounts are acceptable, and even none at all if a person is unable to contribute.

There is reason to believe the Vermont senator would approve of Losada's efforts. His campaign manager, Jeff Weaver, pointed out in an email to supporters that the sum of money required to attend the Clinton-Clooney big-ticket dinner "would require an employee making the federal minimum wage to work 24 hours a day, 365 days a year, for more than 5 years."

Losada's event perfectly captures the spirit of Sanders' message. Not only are inclusiveness and participation more important than a dollar amount, but there's also a significant atmospheric and cultural difference between being catered to by chefs in a Los Angeles mansion and visiting a friend's home to share a meal prepared by everyone.

You can spread the word about #DineWithThe99 (also hashtagged as #PotluckForBernie and #27dollarsAplate), and organize or attend an event that the 99 percent can afford in your community.

More like this
What Is Barack Obama’s Net Worth? He Makes *Way* More Now As An Ex-President
By Hugh McIntyre
10 Times Diana & Meghan Spoke Similarly On The Royal Family
By Sophie McEvoy
Danny Dyer & Ellie Taylor’s New Netflix Game Show Is All About Cheating
By Rachel Mantock
What Is Jeanie Buss' Net Worth? The Lakers President Is Uber Rich
By Hugh McIntyre
Get Even More From Bustle — Sign Up For The Newsletter