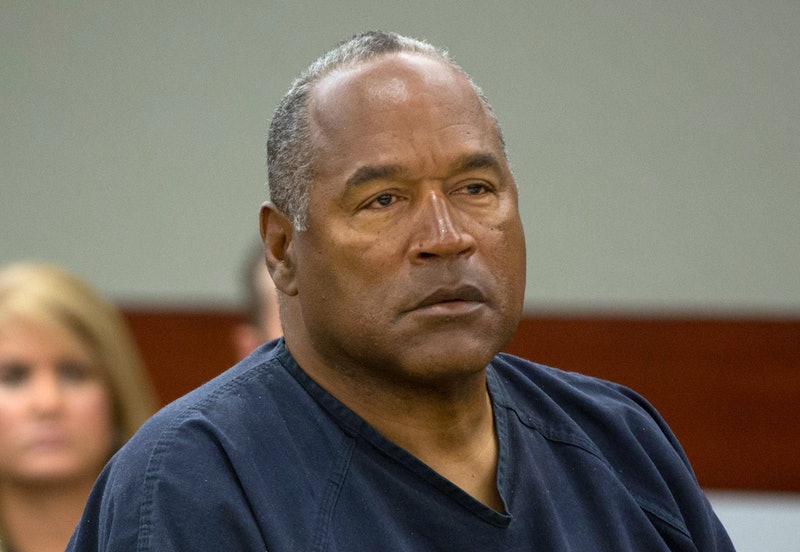 When viewers tune in for the finale of The People v. O.J. Simpson: American Crime Story, we will see the FX series' depiction of the moment Simpson was found not guilty of the murders of his ex-wife Nicole Brown Simpson and Ronald Goldman. But, his legal troubles didn't end with the most famous acquittal of the century. In September 2007, CNN reported that Simpson had been arrested for robbery and assault charges stemming from an incident at the Palace Station Hotel and Casino in Las Vegas. On Oct. 4, 2008 — 13 years to the day since his murder acquittal — The New York Times reported that Simpson had been found guilty of armed robbery, kidnapping, and 10 additional charges. In December, Simpson's sentence was handed down — 33 years behind bars, with the possibility of parole after nine years, according to The Las Vegas Sun. With the possibility of parole in sight, when will O.J. Simpson get out of prison?

Simpson is serving his sentence at Lovelock Correctional Facility and will be eligible for parole in October 2017, ABC recently reported. However, he has made multiple efforts over the past few years to be released earlier than his parole date. According to CNN, Simpson filed an appeal, which was rejected by The Nevada Supreme Court in 2010. In 2013, NBC reported that Simpson had sought a new trial in Clark County District Court and this bid was denied. According to the outlet:

Simpson's current defense attorneys argued that his previous lawyers handled his case so badly that he should get a new trial. Clark County District Court Judge Linda Marie Bell considered 22 claims of ineffective assistance of counsel and attorney conflict of interest, but decided in her 101-page order that the standard required for a new trial wasn't met.

Prior to the premiere of American Crime Story, Simpson's former business manager, Norman Pardo, spoke exclusively to People about Simpson's life behind bars. Pardo described Simpson as "a broken man" and claimed that he has become a recluse who "doesn't want to talk to anybody, including his own family." He also claimed that his former client's health has deteriorated and that "[Simpson] is often not coherent."

Simpson will be 70 years old when he can apply for early release in October 2017. Although his future is unclear, it seems likely that he'll be paroled sooner rather than later — in 2013, Simpson was granted parole for several of the charges stemming from the 2007 incident. At the time, The Christian Science Monitor explained that, although it was a legal victory for Simpson, he would remain behind bars for the weapons-related and assault charges until at least 2017. The outlet reported that Simpson's parole board stated he'd been a model inmate and Robert Pugsley, a professor at Southwestern Law School in Los Angeles, further explained the reasoning behind the decision:

The board agreed that Simpson has had a positive record in prison, participating in programs that address the issues that put him there... Addressing the question of whether Simpson is receiving lenient treatment because of his celebrity, Professor Pugsley says: “What people should take away from this decision is that Simpson is not being treated as a celebrity by the Nevada parole board. He made an appeal to the board based on a record of good inmate behavior, and they agreed with his argument.”

If Simpson's pattern of good behavior has continued, it seems likely that he'll be freed by 2017.