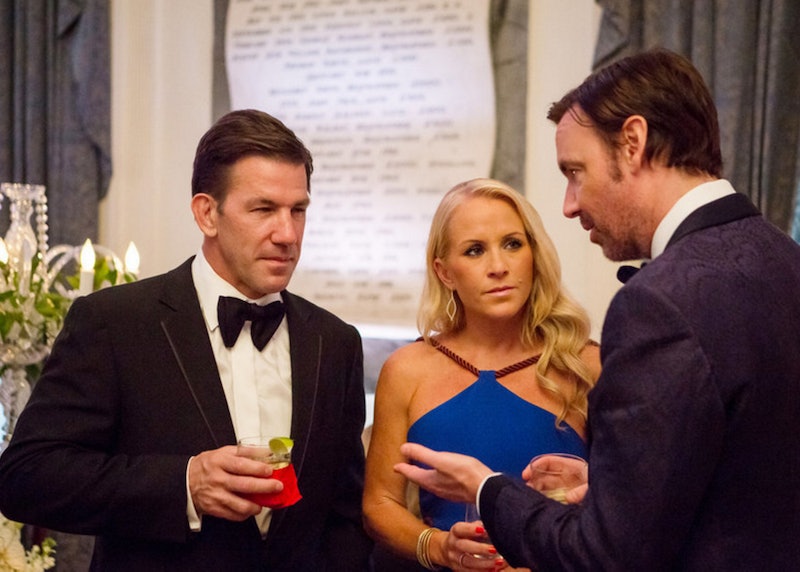 There was something different about T-Rav on Monday night's beyond excellent Southern Charm Season 3 premiere. And that something was an enormous, painful-looking, dark purple bruise around his left eyeball. Toward the top of the episode, Landon stopped by T-Rav's new home to help him make some interior design decisions and catch up (and let the viewers at home know there might be vibes going on, I guess?). The moment Landon walked through the front door of the impressive abode, she immediately noticed the one thing that anyone would notice: her costar's wicked gnarly black eye.

In the final act of Monday evening's premiere, Craig and new girlfriend Naomie invited all of the Charmers to a party, including T-Rav and Kathryn. The estranged exes who hadn't spoken in months would be at the same place at the same time.

When the former couple inevitably found themselves seated next to one another, they made casual small talk about T-Rav's new house. Just a friendly, polite convers— Oops. I spoke too soon. The small talk went from casual to caustic when T-Rav let Kathryn know that their daughter's room would be periwinkle, not pink like they'd previously decided. Kathryn, who already begun to suspect something was going on between Landon and T-Rav, noticed Landon just so happened to wear a periwinkle dress to the party.