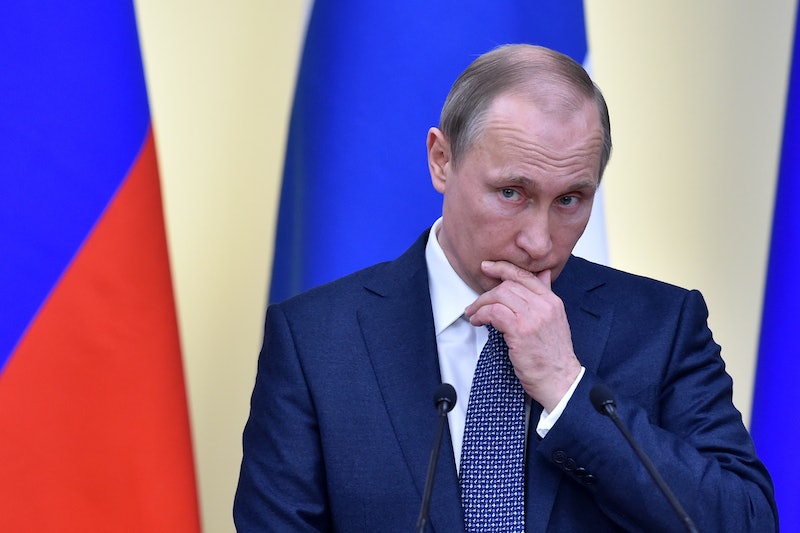 The Panama Papers are the biggest data leak in history. Around 11.5 million documents were revealed by the International Consortium of Investigative Journalists on Sunday. The documents came from Panamanian law firm Mossack Fonseca and reveal how over 140 world leaders, celebrities, and businessmen have allegedly avoided paying taxes by placing their money in offshore accounts. Among some of the figures tied to the massive leak — or directly implicated by it — are Russian President Vladimir Putin, Pakistani Prime Minister Nawaz Sharif, and Icelandic Prime Minister Sigmundur David Gunnlaugsson. Given that the Western media has essentially made him the face of this data leak, what do the Panama Papers actually say about Putin?

The papers point to over 200 countries and 72 former and current heads of state, but the one name that has spread across media reports like fire is Putin's. According to The Guardian, the papers reveal a $2 billion trail that leads to Putin — or more specifically, his "inner circle" — starting with his friend Sergei Roldugin, who is reportedly at the center of the scandal. Other world leaders have been directly implicated by the leaks, including British Prime Minister David Cameron, Saudi Arabia's King Salman, and Syrian President Bashar al-Assad, but their names have been less popular following Sunday's data dump.

Even so, Putin's name has not directly been mentioned in any of the documents covered so far, according to Russia Today, signifying a less-than-modest media frenzy over Putin's unfounded implication in this scandal. The outlet attributes Putin's status as the face of the leaks to clickbait. Putin's spokesperson, Dmitry Peskov, likened the leaks to "Putinophobia," claiming that the documents were released as a plot to "destabilize the situation in Russia ahead of elections."

Mossack Fonseca is the fourth-largest offshore law firm in the world, and has stood by their claim that their actions have been legal. In a statement released to The Guardian, they claim that their actions "always complied with international protocols." There are yet to be any documents associated with any American citizens, politicians and businessmen alike. James Henry, economist and senior adviser to the Tax Justice Network, told Fusion that's because, "Americans really don’t need to go to Panama. Basically, we have an onshore haven industry in the U.S. that is as secretive as anywhere."

WikiLeaks is currently contemplating releasing the documents in a searchable form — like Hillary Clinton's emails — making them easier to sift through.

So what exactly do the Panama Papers say about Putin? His name just happens to be the one that is helping to spread news of these leaks.