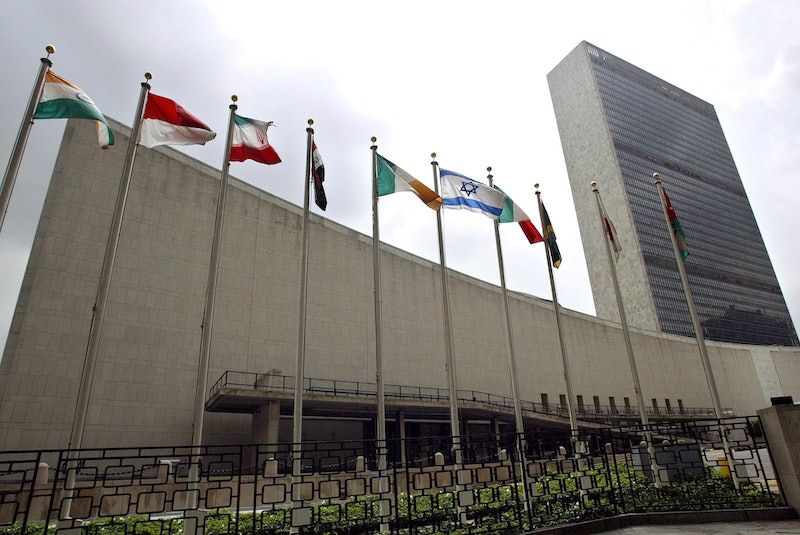 There may be more than one glass ceiling shattered in 2016. Official nominees for the top post at the United Nations include several prominent women, making it even more possible that the next U.N. secretary-general could be female. This would be a history-making move. In the organization's 70-year history, only men have served as secretary-general. The next leader will be appointed this fall and take over the post on January 1, 2017.

On Monday, Helen Clark, the former prime minister of New Zealand, entered the race, bringing the number of female nominees on par with men, with four each. Her prominence — she's currently the head of the U.N. Development Programme — could raise pressure on the organization to ensure its next leader is a woman.

The next secretary-general will be the ninth, and the selection process so far has been far more open than in previous years. This time, input from all 193 member countries is being considered. In years past, the Security Council's five permanent members (China, France, Russia, the United Kingdom, and the United States) have made secret deals to choose a leader.

That all changed in December, when it was announced that open forums with the nominees would be held until at least July, when the official selection process begins. The presidents of both the General Assembly and Security Council co-penned a letter emphasizing transparency and inclusivity. It said, "Member States are encouraged to consider presenting women, as well as men," in order to "guarantee equal opportunities for women and men." The nominations so far show that this is working.

Nominated by New Zealand’s current prime minister, John Key, Clark brings lots of experience to the table. She served as prime minister of the country from 1999 to 2008, and has since been working at the U.N., heading the agency that advocates for development around the world. She understands the importance of the post. At her candidacy announcement in New York, Clark said, "The position of secretary-general is about giving a voice to seven billion people who look to the UN for hope and support."

On a personal level, she said she's "deeply honored" to be nominated and ready to take on the challenge. She told The New Zealand Herald, "My whole adult life has seen me progressively stepping up to leadership challenges." She could be stymied by Russia. The country is thought to be prefer someone from Eastern Europe, which would be the next geographic region to put forward the candidates for the job if the typical rotation were followed.

Pusić was nominated in December. She currently serves as the foreign minister in Croatia's center-left government, and oversaw the country's accession to the European Union in 2013. Before becoming involved in politics, she was an academic studying sociology. In 2000, she ran for the Croatian parliament after living through the Croatian War for Independence from Yugoslavia.

She said that experience could help her as the next secretary-general. "It helps a great deal if she can understand and know how it feels when talking to people in a country, or confronting a situation in a country before or during a conflict," she told The Independent. Pusić hopes that a public debate between the candidates can help open up the process.

Bokova was formally nominated by Bulgaria's foreign ministry in February, but she has been seen as the frontrunner for the job since at least December, when the letters soliciting candidates went out. She's the current head of UNESCO, and was the first woman to get the job. She was also the first leader from the former Soviet Bloc to head the agency.

She came under fire when Palestine was admitted to UNESCO; the United States withheld its funding from the organization. But she was easily reelected to her post regardless. Her term expires at the end of 2017. The main criticism of Bokova is her privileged upbringing in a prominent communist family. She attended school out of the country, in both Russia and the United States. She is fluent in French, English, Russian, and Spanish in addition to Bulgarian. She's in it to win it. "I know that I will win the UN vote," she told a Bulgarian TV news channel.

Gherman could make a good choice because of Moldova's location between Russia and the E.U. It is a member of the Commonwealth of Independent States, a group of former Soviet Republics, but it also signed an association agreement with Brussels, bringing it a bit closer to integration with Western Europe. Its constitution guarantees permanent neutrality.

Gherman is from a pro-EU party, which could hurt her chances with Russia's Security Council vote. She did her postgraduate studies in the UK, and served as ambassador to Austria, Sweden, Norway, and Finland before taking the top post in Chișinău as Moldova's foreign minister.

Whether transparency reigns this year or backroom trading ultimately prevails, the movement to elect a female secretary-general will benefit from such outstanding nominees.