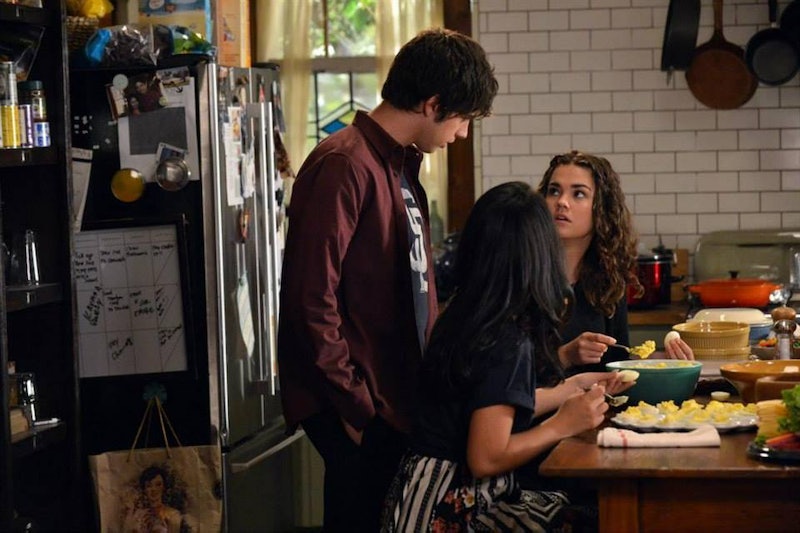 On Monday night's episode of ABC Family's The Fosters , Callie finally figured out what life's all about, and we got to witness one of the weirdest funerals ever. Mostly because a lot of its attendees felt that Stef's dad's funeral was perfect time and place to drop some bombshells/get pissed/play with Ouija boards when it obviously wasn't. But at least Callie and Brandon are finally over (thank god) and she wants to have a family again.

This week's episode was all about Frank's funeral and dealing with unresolved issues. Stef dealt with not reconciling with her dad before he died, Callie acknowledged her issues with her mom's death, Jude consulted the spirit world for answers about whether or not he should get adopted, and Lena stood up to her bitch of a mother because it isn't a funeral without someone getting told off. So it was an extremely busy and kind of inappropriate funeral when you think about it — considering there were only a few moments where people actually remembered Frank and a moment where Stef bitched about who was chosen to read a eulogy for her dad.

So here's how every Foster (and some non-Fosters) made Frank's funeral kind of weird (almost as weird as Padres garb doubling as funeral attire):

Brandon shows up, sees Callie, and is basically like, "I think we should tell everyone about our relationship right here in the middle of the funeral." Callie tells him no (at least we know she's still got some sense), and he's upset but he gets over it. Because, hello, THAT IS A TERRIBLE IDEA.

Later on, Callie has a breakdown/breakthrough about her unresolved feelings about her mother's death (not the ideal setting but makes sense — emotions breed more emotions) and Stef consoles her. They bond over losing parents and because Stef is a great mom and Callie realizes that she's been so dumb by running away, moving to the group home, and trying to get her own apartment because she has a great family. At the end of the night, Callie sits Brandon down and is like, "I can't do this anymore — I can't give up EVERYTHING just for you." Duh, girl.

Emma crashes the funeral, but she brings kugel so it's all good. But then him and Emma disappear up into his room where they end up video chatting with Lexi. Yes, the same Lexi that sent Jesus a photo of her in her bra during last week's episode. Thankfully Emma was there to prevent their chat from turing R-rated, but still — video chatting during a funeral? C'mon Jesus. What's next — a funeral selfie?

Jude has a friend over too and they end up playing Ouija board with Mariana. Mariana asks some silly questions about whether or not she'll ever get a boyfriend and then gets really embarrassed when the board tells her that she will and his name will start with a "Z" (Z for Zach — hehe), so she runs for it. Jude and his buddy continue to consult the board where Jude asks whether or not he's talking to his mom and also if it's okay to get adopted by Stef and Lena. Thankfully, Jude's mom says yes. Again, don't these kids eat — there's all kinds of food and organic kugel and they're upstairs talking to the dead while a funeral is going on.

Stef found Lena's prenatal vitamins in their bathroom drawer and she's all freaked out about it — you know, on top of the fact that she buried her estranged father. Instead of asking Lena straight up about wanting to have a baby, she gets pissed off and sulks around (while also sulking about her dad). Lena wants to know what's up and Stef just keeps giving her the brush off all day. Stef, you're at a funeral, why are you having a one-sided fight with Lena when you should just be letting her support you? You're better than this.

It was nice of you both to show up, but did you need to show up just to be the bearers of bad news? An article is out that paints Mike in a seriously bad light in the shooting-Ana's-boyfriend situation. He tells Lena about it and they try to hide it from Stef — but she obviously finds out and now she's even more upset than she was about her dad dying and Lena wanting to have a baby and not telling her about it. She reads the article and then forgets a little about the drama because well, Callie's coming home and that's amazing.

Later on, Captain Roberts shows up. Pretty late, may I add. And of course, she's the bearer of even worse news — the DA is planning to build a case against Mike in regards to the shooting. Stef, who's already dealt with the stress of lying about what actually happened at the incident, now has to worry about whether or not this case will expose them both. Again, this is a funeral, people. I get that this is important but WHAT THE HELL.

Other notable moments included Mariana giving Emma the death stare for whatever reason (?) and calling her crazy, Lena's mom telling her that she should give up on having a baby and Lena subsequently telling her off, and Mariana calling black licorice evil.

But most importantly of all: CALLIE AND BRANDON ARE OVER AND SHE'S COMING HOME. REJOICE.