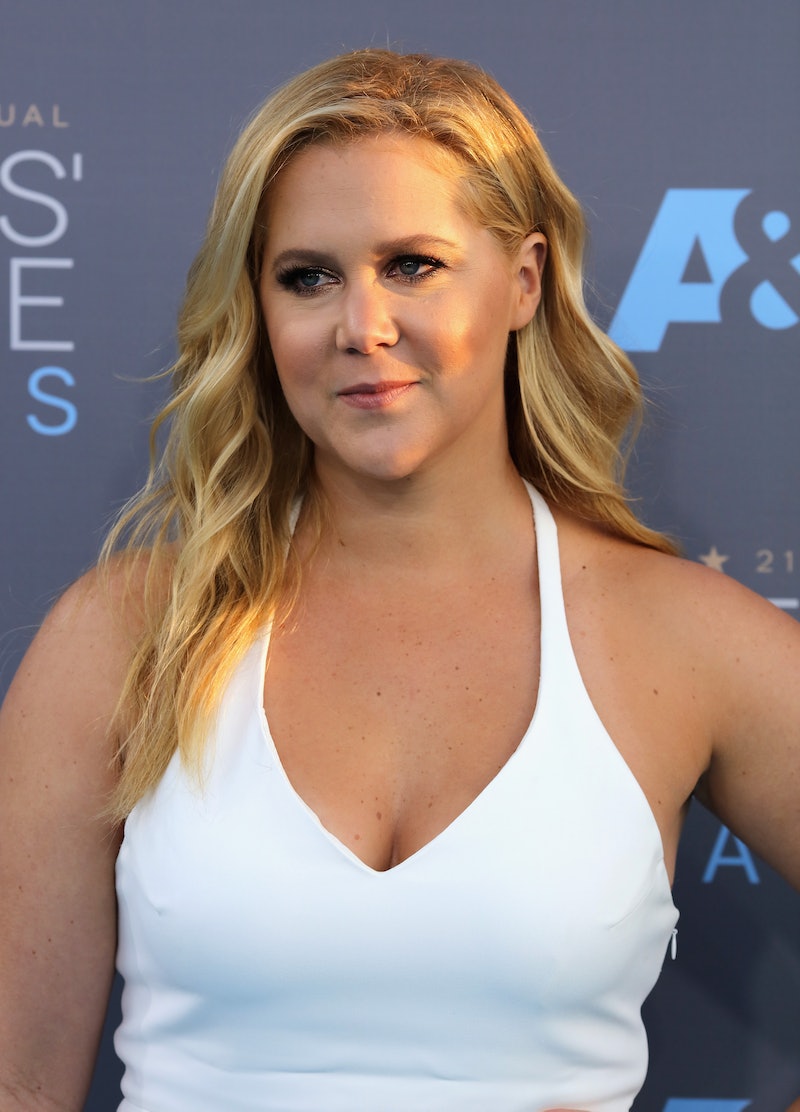 Amy Schumer is often regarded as a feminist icon for speaking honestly about female experiences, in particular her frank discussions of sexuality and body image. However, speaking positively about body image does not mean that Amy Schumer is plus size — something she pointed out in her latest Instagram post. After being included in Glamour's plus-centric issue, the actor-comedian took to social media to clarify some things. Although she doesn't believe the label is a negative one, she does think there are dangers in associating such a label with public figures who, like herself, wear sizes much smaller than 14/16.

Correlating a celebrity like Schumer to the term "plus size" undoubtedly provides the public with a skewed notion of what plus size actually looks like. This subsequently erases the identity and representation that actual plus size people need. As Schumer wrote in her Instagram post's caption, "Plus size is considered size 16 in America. I go between a size six and an eight. [Glamour] put me in their plus size only issue without asking or letting me know and it doesn't feel right to me."

Glamour did not specifically call Schumer "plus size," but rather included her in an issue meant to be inspiring to women sizes 12 and above — something Glamour Editor-In-Chief Cindi Leive noted in a Twitter apology to Schumer. However, this has all been indicative of a greater issue within mainstream media: Assigning labels like "body positive" and "plus size" to celebrities who do not identify as such.

The rise of popularity associated with terms like plus size, fat acceptance, and body positivity has been a fast one these the past couple of years. Magazines and websites have subsequently attempted to spread self-love-inducing words, but sometimes without enough prior research into those words.

With that has come the application of these terms to those who they don't apply to. Schumer is not the first, but she's a prime example of the damage that using these terms without thorough understanding of the movement can cause. Not only is plus size visibility still being erased when the label is applied to not-actually-plus people — thus turning the focus away from women sizes 16 and above (and particularly sizes 22 and above) — but "plus size" is often touted as a negative as a result. As Schumer wrote in her caption, "Young girls seeing my body type thinking that is plus size? What are your thoughts? Mine are not cool." Unfortunately, she inadvertently correlated being plus size with something negative and undesirable — and that's a further risk involved in applying labels to those who do not subscribe to them.

Meanwhile, Ashley Graham continues to be deemed a plus size model, if not a plus size role model. However, Graham has repeatedly stated that she eschews the term plus size for herself, wishing instead to be called "curvysexalicious:" A term that could arguably be empowering for her, but lamentably disregards all the work done by the fat positive community to reclaim plus size as a positive term.

Although I'm glad that Graham has received the visibility she has, one cannot help but wonder what kind of role model she can be for undeniably plus size women when she does not identify with those women. I believe the model's intentions are good. She likely wants to elevate inclusivity between size ranges by removing terms that are exclusive to one or the other. But as it's been noted repeatedly by the plus size community, we need to erase the stigma behind "plus size" and "fat" and find equality for larger people before integration is a viable option.

Jennifer Lawrence is another celebrity who's oft deemed a body positive role model. The star has certainly said a lot of great stuff about female empowerment, as well as body image. But her take on the word "fat" has been somewhat questionable.

As much as Lawrence may seem like a great example for powerful women everywhere, particularly with her seemingly feminist outlook, she just doesn't have an incredibly nuanced perception of fat politics — something "body positivity," in the original, purest sense of the term, is intrinsically tied to. When she told Barbara Walters that "it should be illegal to call somebody fat" in a 2013 interview, she ended up suggesting that fatness is inherently bad, and failed to demonstrate understanding for the way body positive and fat positive activists are fighting to de-stigmatize that word and all that comes with it.

What we can take away from instances such as these is that researching a person's stance on a movement or identity before labeling them a part of said movement or identity is crucial. Just because a person has made one statement that could be perceived as body positive simply doesn't mean their outlook on life is as such. Just because a person is curvier than our media's usual representation of women doesn't mean that person is automatically plus size, or relatable to the actual plus size community. It's not up to the body positive or plus size communities to regulate how these terms are used, but for the publications and people utilizing them to ensure they're being used correctly.

Otherwise, the message of body positivity will arguably end up diluted to comments like, "I don't wish death upon fat people," and that alone, rather than the revolutionary activism it was meant to be.