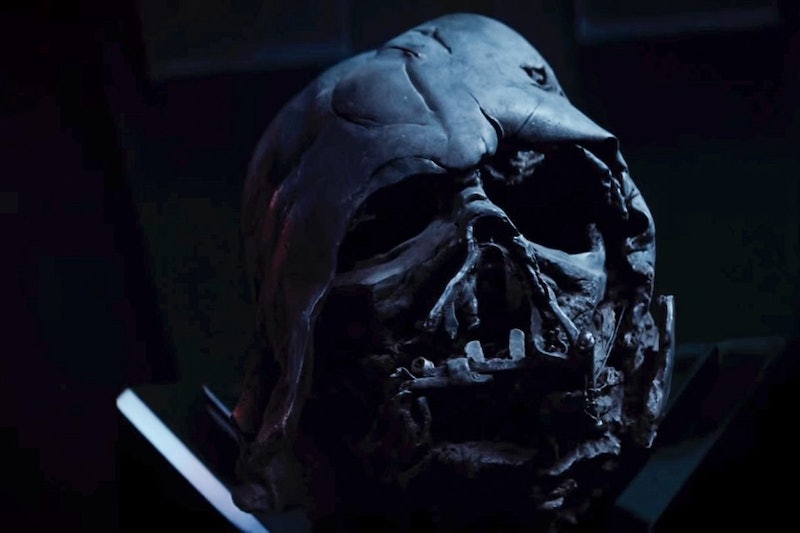 At this point, I think it's safe to say that Kylo Ren is one pretty messed up kid. He got tempted by the Dark side, he worships his dead grandfather's helmet, he goes on anger rampages, and he kills his own father. However, while watching Star Wars: The Force Awakens, there happen to be some other, unaddressed oddities about Kylo Ren that need explanation, including (but not limited to): Who exactly is Snoke? Is Kylo Ren related to Rey in any way? How did Kylo Ren get such long, flowing hair? And, most importantly, why does Kylo Ren have a table full of ashes?

Let me jog your memory. We are in the Starkiller Base. Kylo Ren is holding Rey hostage. Rey points out how ridiculous it is that he's hiding his face behind a mask. Kylo Ren removes his mask, and we realize he was that actor from Girls this whole time (Adam Driver). Then he takes his mask and places it down on the table beside him. Dusty ash seems to mysteriously float up into the air upon him doing so. Now, this may not seem like a big deal to you. Like me, you could have just assumed that Kylo Ren really needed a maid over at Starkiller Base (and, c'mon, working for him can not be easy). However, that strange occurrence actually does kind of have its own back story behind it. And it's pretty messed up.

During a Star Wars: The Force Awakens Blu-Ray release interview with Entertainment Weekly, Director J.J. Abrams actually addressed the cloudy situation in explaining that — while that happening wasn't exactly planned — it was placed there on purpose for the filming of another scene. “The backstory is, that that table has the ashes of the enemies he’s killed," explained Abrams, "That moment was actually shot for, and meant to be used in, the scene where he was talking to the Vader mask.” Like that's not terrifying or anything. However, it seems as if the cosmic planning of events couldn't have made Abrams prouder. “He originally had his mask off the first time we shot that scene. Then we reshot it with his mask on, but we had that shot which I loved and thought was so cool of the mask being slammed down into that ash." And, I have to admit, the ash flying up did look pretty cool.

So, basically, Kylo Ren just keeps the ashes of his past victims around the room where he uses the Force on his next victim. And that is just straight-up creepy. Moral of the Story: Don't piss off Kylo Ren. Or you may just end up being the next pile of ash he slams his helmet into... before he picks it up and puts it back on his head. Or something.