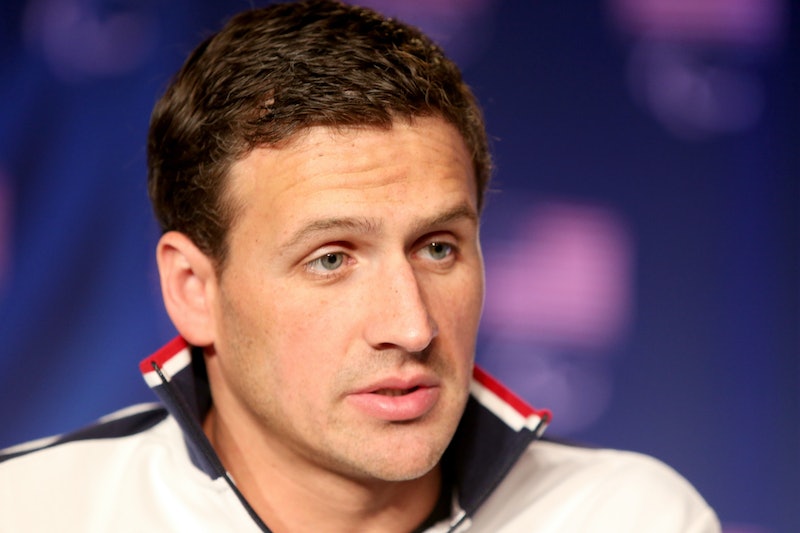 Like many other celebrities these days hopping on the Snapchat bandwagon, sports fans will be happy to know that 11-time Olympic medalist Ryan Lochte is on Snapchat. In fact, he was a very early adopter of the popular photo and video sharing app, joining all the way back in 2013. Yep, Lochte was on Snapchat way before most celebs... even before the Snapchat queen herself, Kylie Jenner, or any members of the Kardashian-Jenner clan were on the app, for that matter. But what is Lochte's username on Snapchat?

In 2013, Lochte revealed on Twitter that his fellow swim team members convinced him to join, so he did. Simple as that. As for his username, well... you won't have to dive deep to figure out the swimmer's Snapchat handle. In fact, it's Ryanlochte. I guess he's not into something like "itsryanfresh" à la Nicole Richie, whose username is "itsnikkifresh." No shame in that.

It seems Lochte is not an obsessive Snapchat user, but he is a big fan of social media overall. He has always been open with fans on his social media accounts, often tweeting to fans and sharing behind-the-scenes selfies on Instagram, so there are definitely some exciting things you're likely to see if you follow him on Snapchat.

Lochte loves to shower his family with praise on social media, and I'm sure I'm not alone in wanting to see endearing moments with his loved ones.

He reportedly named his dog Carter as a tribute to his favorite rapper, Lil Wayne. Lochte is obsessed with Carter, so I'm dying to see cute puppy moments.

Behind The Scenes At Swim Practice

Everyone knows that professional swimming is seriously physically grueling, but Lochte seems to have so much fun with it that I am dying to see what goes on behind the scenes.

In his line of work, Lochte gets to rub elbows with lots of impressive famous people, like fellow Olympic swimmer Missy Franklin.

Moments From His Travels

Purely so I can live vicariously through his amazing travels, obviously.

This is obviously a bit shallow on my part, but I don't care. Jeah!

If you're a Snapchat aficionado, make sure you add Lochte on the app ASAP.

More like this
Prince William Reveals Charlotte's Hidden Talent In Ultimate Proud Dad Moment
By El Hunt
Will Beyoncé Be At The BET Awards To Perform “Break My Soul” Or Attend The Show?
By Jake Viswanath
Prince William & Lorraine Kelly Lead Tributes To “Truly Remarkable” Dame Deborah James
By Sam Ramsden
Fans React To Kelly Holmes’ “Extraordinary” ITV Documentary
By Sam Ramsden
Get Even More From Bustle — Sign Up For The Newsletter