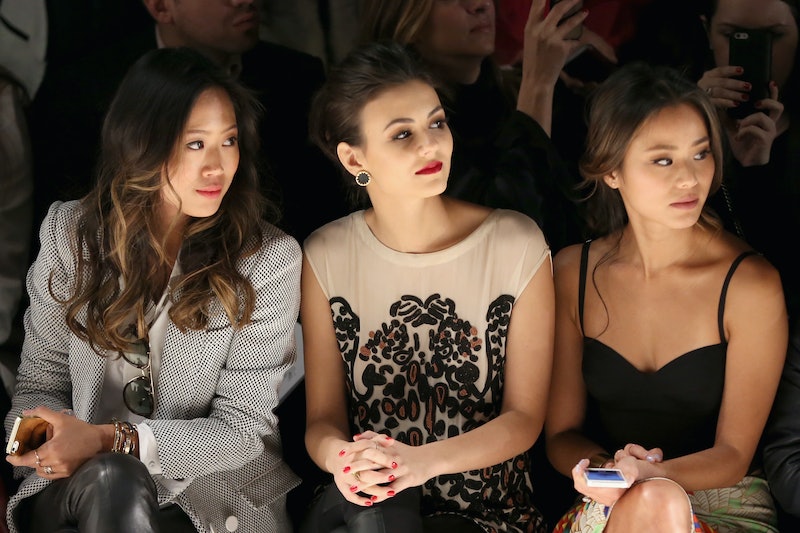 The world of fashion is a finicky one, with an endless stream of celebs and it-girls who are here today, gone tomorrow. Though some of fashion’s favorites (think Alexa Chung and Olivia Palermo) have stood the test of time, there’s a fair share of turnover when it comes to which Hollywood starlets are every designer’s best friend and muse. That becomes clearer than ever when you see the revolving door of famous faces populating the front rows at New York Fashion Week.

This NYFW, the door hasn't revolved so much. A small group of stars have appeared in the front row again and again at a variety of different shows. They're so ubiquitous that they just may be the new guard of fashion darlings and rising style icons. Check out the five women who have been on our radar this Fashion Week:

She may have started off life in Hollywood as a cute sidekick with roles in the Twilight series and Up in the Air, but Kendrick has slowly evolved into a respected actress and a staple of red carpet best-dressed lists. It seems like her evolution has kicked into high gear recently, with the actress making a splash in chic dresses at Sundance and a particularly sexy Grammys gown. Now that NYFW has rolled around, she’s become a front row regular, making us wonder exactly how it’s possible to get to so many shows while looking that flawless and adorable. From Milly and Carolina Herrera to Monique Lhuillier and Rebecca Minkoff, Kendrick has fit in seamlessly with the fashion crowd in her elegant ensembles.

If you asked us last week, we would have put our money on Allison Williams being the Girls star in attendance at most shows, but instead, Mamet has graced us with her pretty, unpretentious, fun approach to fashion at shows like Rebecca Minkoff, Alice + Olivia and more. From a collared frock and patterned tights at Honor to a fuzzy grey sweater and fur coat at Rebecca Taylor, Mamet has put a refreshing new face on casual-chic style — one we’d like to see at future Fashion Weeks and beyond.

It’s no secret that the Shameless star has an impeccable fashion sense, but the brunette beauty has been making that ever more evident at the long list of designer shows and collection previews she’s been attending this Fashion Week. She's been everywhere, sitting front row at Carolina Herrera, Yigal Azrouel, Monique Lhuillier, and more, but we’ll never tire of seeing Rossum’s refined, elegant style around Lincoln Center.

From her on-point style and ability to wear nearly any designer or outfit flawlessly, you’d never guess that this budding actress started her career on The Real World. But Chung has come a long way from her days on MTV, making her way into the heart — and front rows — of designers like Mara Hoffman, Monique Lhuillier, and Max Azria, among others.

You may not know her yet, but get ready, because the star of the upcoming teen vampire flick Vampire Academy is about to show up on your radar big time. Deutch is already settling into her spot as up-and-coming fashion it-girl, getting comfortable while looking super chic on the front row of shows such as Diane von Furstenberg, DKNY, Hervé Léger, and more.