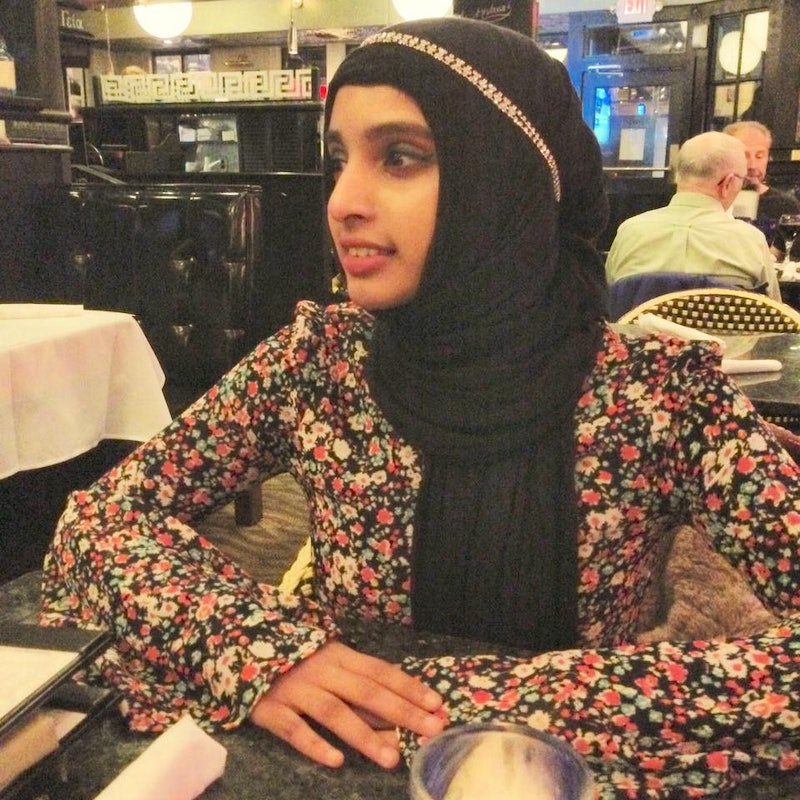 I hope that this letter finds you well. My name is Amara Majeed, and I am an 18-year-old student pursuing a double major in Cognitive Neuroscience and Public Policy at Brown University.

Minister Rossignol, I am writing this letter with regards to a rather crude comparison that you — France's Minister for families, children, and women's rights, and a woman yourself — made recently. In response to an interviewer suggesting that many women choose to wear the hijab out of their own free will, you remarked, “Of course there are women who choose it. There were American negroes who were in favor of slavery."

Because you acknowledged and apologized for your disrespectful, distasteful choice of words, I am not going to give you the five-paragraph-long lecture regarding your use of the word “negroes” in the 21st century. Rather, I’m going to primarily focus on your why your conflation of Muslim women wearing the hijab with the enslaved supporting enslavement is inherently problematic.

At 16, I founded "The Hijab Project," a global initiative that promotes the understanding and empowerment of Muslim women through social experimentation. My project has been a worldwide success, and has received international attention from Good Morning America, Global News, BBC, MSNBC, The Baltimore Sun, Business Insider, Marie Claire Magazine, Yahoo!, and Seventeen Magazine, just to name a few. The Hijab Project essentially encourages women of all faiths, ethnicities, and races to try on the headscarf for a day, go public with it, and then share their experiences on my site. Through my project, I hope to encourage the understanding of an often-misunderstood minority in the United States, foster sisterhood, and promote feminism.

The women who have participated in this social experiment have returned with eye-opening stories of empowerment, understanding, and newfound outlooks on the diversity of the female experience at large. Some have told me that wearing the hijab has allowed them to recognize their white privilege. Others have detailed how trying on the headscarf has opened their eyes to the reality of Islamophobia in our society. Many have mentioned that donning the hijab was actually quite liberating.

In the history of my project, never has a participant mentioned that the hijab made her feel oppressed.

When I was 14 years old and in my freshman year of high school, I decided to start wearing the hijab. The second-most-frequently-asked question I have received during my time as a hijabi (the first being “Do you shower in that thing?”) is “So did your parents make you wear that?” Back then, I found this question to be funny. My mother didn’t even wear the hijab at the time; only recently, several years after I put it on, did she decide to start wearing it. While my parents were initially surprised by my decision, they were respectful of it. I will be forever grateful for that. While I initially found this question to be funny, I now find it to be rather problematic. Minister Rossignol, your statement is not dissimilar from what those 14-year-olds used to ask me. Both statements are indicative of an underdeveloped understanding of the hijab and of the Muslim women who choose to wear it.

Minister Rossignol, would it surprise you if I told you that I actually wear the hijab for feminist purposes? Throughout history and on a global scale, women have been sexualized and objectified. Let’s compare a woman on the cover of a magazine versus a man on the cover of a magazine. The woman will likely be wearing very little clothing, posed seductively, and looking into the camera coyly. A man on the cover of a magazine, however, will likely be wearing a full suit, posed authoritatively, and looking into the camera lenses confidently. So tell me, what does this disparity in the portrayals between males and females say about our societal values? We as a society are propagating this incredibly flawed ideology that the value of a woman lies in her beauty, her body, and her sexuality — while alternatively, the value of a man is in his career and his intellect. I find this to be exceptionally problematic.

As women, a lifelong challenge for us is that our physical appearances are deemed to be the most important aspect of our beings — and this is a direct product of the gender inequality existent within the infrastructure of our society. In effect, for me, the hijab is a social motif; it is a political symbol. By wearing it, I’m stating that I want to be seen for so much more than my physical appearance or my body. I want to be seen for my intellect, my personality, and my activism. My choice of wearing the hijab resonates with me as a female and as a feminist.

Now, this isn’t to say that the hijab isn’t used to oppress. There are many countries that legally force women to cover themselves, and yes, this is oppression. But here’s where you’re mistaken: that is not hijab. Hijab is so much more than a piece of cloth; for me, the hijab is a feminist symbol, and it means something different to each woman who chooses to wear it. But when the hijab is forced, it isn’t hijab. Let’s take a look at this from an Islamic perspective. The second chapter of the Quran states: “there is no compulsion in religion.” Furthermore, everything in Islam is based on intention. If I, as a Muslim, do something with the wrong intention, the action is considered invalid. Thus, if wearing the hijab is not a woman’s choice, it isn’t a hijab — it’s just a veil.

Your conflation of a woman’s choice to wear a hijab with the enslaved supporting enslavement bothers me as a Muslim, it bothers me as a feminist, and it bothers me as a human being. I am allowing you to see what I want you to see. How is that not liberation? I’m tired of women like you imposing your brand of white feminism on me and telling me that I am oppressed, that this was not my choice, and that I need to be unshackled. With all due respect, Minister Rossignol, you are not my savior.

And guess what? Perhaps I am mistaken, but as France’s Minister for Women’s Rights, I hold you to a higher standard. I expect you to understand concepts like intersectional feminism. I expect you to view feminism and what a female chooses to put on her body without ethnocentric lenses. So, Minister Rossignol, as a Muslim woman that proudly wears the hijab, I am telling you that your statements are in fact contrary to, if not hindering, the women’s rights movement.

Lastly, your implication that I am unknowingly oppressed and unknowingly upholding the institution of subjugation disturbs me as an individual. I am no fool, Minister Rossignol. My hijab covers my head, not my brain.

More like this
How Angelica Ross Plans To Make Roxie Hart Feel “Universal”
By Jessica Derschowitz
Women Around The World Are Cutting Their Hair In Solidarity With Mahsa Amini
By Darshita Goyal
Help! I'm Not Getting Any Attention On Dating Apps. What Can I Do?
By Sophia Benoit
The 12 Best Strapless Bras That Won’t Slip & Fall Down
By Audrey Williams and BDG Commerce
Get Even More From Bustle — Sign Up For The Newsletter