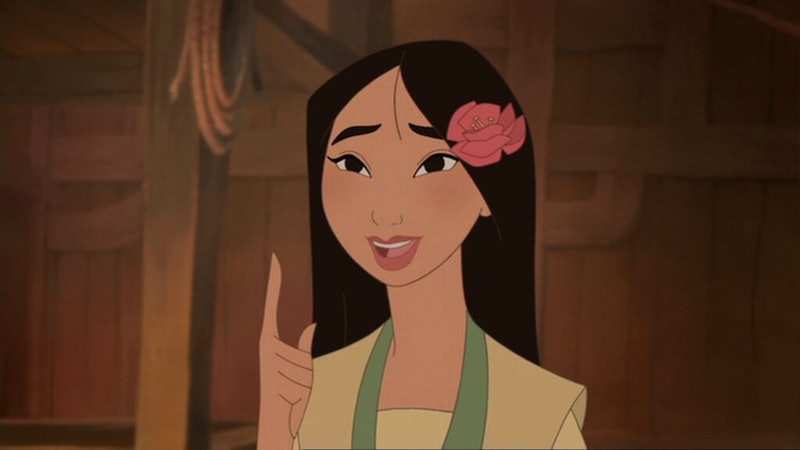 Sometimes, when adulting gets to be too much and it seems like everyone is out to get me, and I just feel weak and inconsequential, the only way to work through the struggle is to hang out with my number one girl, Fa Mulan. Mulan is one of those '90s movies I still watch today happily, if perhaps a little too often. When the movie came out in 1998, I can only imagine that many other young girls left the movie feeling just as inspired as I did, thinking things like "I can do anything that boys do" and "my looks aren't the most important thing about me." The movie was a powerful experience for me back then, and it happens to remain just as powerful all these years later.

The greatness of Mulan isn't just in its message, but in everything from its imagery to its humor to its music. No matter how many years have passed since the movie's release, it still holds up and will most likely continue to do so for many years to come. Here's why I, and so many others, still happily watch Mulan over and over again.

1. Her Dedication Is Inspiring

Nothing will make you get the motivation to finish your taxes quite like watching Mulan spend all night trying to get up to the top of that pole.

2. The Music Is Wonderful

When the songs aren't making you cry, they're making you laugh. I mean, "Reflection"?! Too much.

3. The Message Is So Empowering

I said it once, I'll say it again: Mulan is an incredibly empowering movie about going after what you want and not letting anything hold you back, especially for young girls.

4. Li Shang Is Hands Down The Hottest Disney Dude

No offense to my other loves, Aladdin and Simba.

5. The Jokes Are Funnier The Older You Get

I don't think I really grasped the full extent of Mulan's humor until I hit puberty. Then all her family's jokes made sense.

When I figured out that Mulan was voiced by Ming-Na Wen, who plays Melinda May in Agents of S.H.I.E.L.D, it was a wonderful surprise. I always knew Eddie Murphy was Mushu, but the casting became more awesome as I watched more of his films growing up and could properly recognize his comedy genius.

7. The Girl Power Vibes Are Strong

Mulan starts out as just an ordinary girl and ends up having the entire country bowing down to her. Sometimes the patriarchy can get you down, but a quick re-watch of Mulan should help to bring you right back up.

8. It's Simply A Beautiful Movie

The design of every detail in this film, from the costumes to the backdrops, is absolutely stunning. Mulan is definitely one of the prettiest Disney movies ever made.

9. The Characters Are Silly Fun

Sometimes it's good to see characters be forced out of their comfort zones or make big mistakes, but Mulan is filled with admirable people, and it's a pleasure to watch them.

10. The Villains Are Genuinely Scary

No Disney movie is complete without a good villain, and Mulan has plenty. Watching them be defeated still feels like a victory.

11. It Has A Fascinating Historical Basis

Mulan is based on a Chinese poem called The Ballad of Mulan. It's interesting to read the poem and then watch the movie to compare and contrast the two, and it'll get you thinking about Chinese history during the time the film is set.

Most Disney movies are worthy of one or two extra watches, but in my professional opinion, Mulan is the reigning queen supreme. No film will make you feel quite as inspired to take on challenges, or as confident in yourself and your abilities.