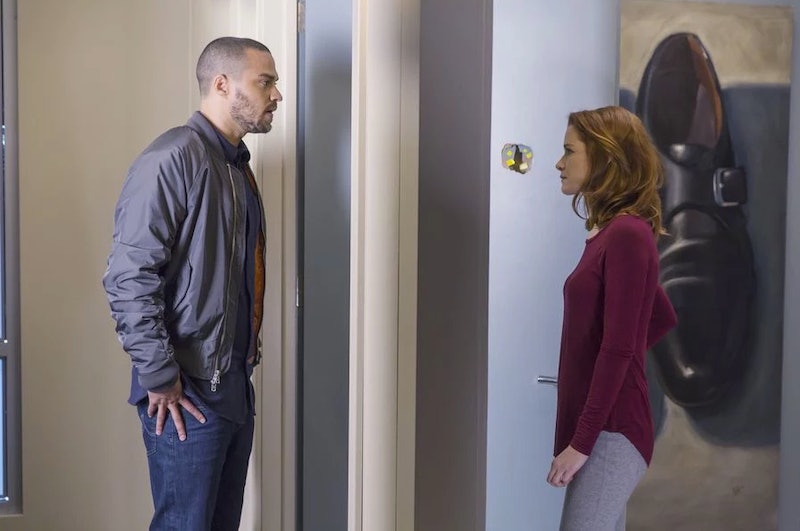 Fans all know Grey’s Anatomy has taken us to some dark places over the years with plot twists, tragedies, and deaths of beloved characters. Some of these highs and lows felt a little cheesy or false, but fans embraced them out of love and devotion to the show. And, some the most riveting plots on the series were those that could happen in real life. But, there is a sort of strange balance of could this really happen? and this could never happen, right? on the show now with Jackson and April’s tumultuous divorce. Could Jackson from Grey’s Anatomy legally sue April in real life for concealing her pregnancy? Bustle asked an actual lawyer to comment on Catherine Avery's plan, because, with this show, you never really know.

The current plot point has Jackson wanting to sue April because she “withheld information” — that she is pregnant — until after she signed the divorce papers. To be fair, Jackson hasn't confirmed he wants to go through with the suit — it was his mom's idea — but if he wanted to, would he even be allowed? I did some research to see if this case was based on any real life courtroom drama. But, the real life cases I came across were usually the reverse of the situation on the show — women lying to their husbands about being pregnant when they weren’t, which The Atlantic called “inadvisable” in court. I also found some upsetting cases where rape victims were sued for custody by their rapists.

While these cases were enlightening, none of them held the answer to my question about Jackson’s threat of a lawsuit. So, Bustle interviewed Carol Rider, a regulatory and compliance lawyer from Mandeville, Louisiana, who, in addition to knowing the law, also watches Grey’s Anatomy.

In the episode in question, Jackson's mom says of April, "She legally committed fraud ... Now we can go after her." But, Rider says it would be difficult to prove fraud in this case.

Proving fraud requires a showing of specific intent to misrepresent or omit a material fact with the intent to cause loss to the victim, or to cause the person defrauding the victim to obtain or gain something. So, in the Grey's example, Jackson must prove that April omitted a material fact — her pregnancy — that caused him loss or caused her gain. Her failure to disclose her pregnancy upset him, understandably, but what did he lose? His wife? Yes. Custody/visitation with his child? No. What did April gain? Freedom? Yes. Sole rights to the child? No. Proving fraud in the Grey's example would be difficult. However, people sue for the oddest or most ridiculous things.

So, basically yes he could sue, it seems like people can sue for almost anything. But, according to a bona fide lawyer, this case would be a tough one for Jackson to win IRL. But, since reality doesn’t always play a part on Grey’s Anatomy, fans should still be prepared for whatever legal battle — and potentially shocking outcome — could ensue.