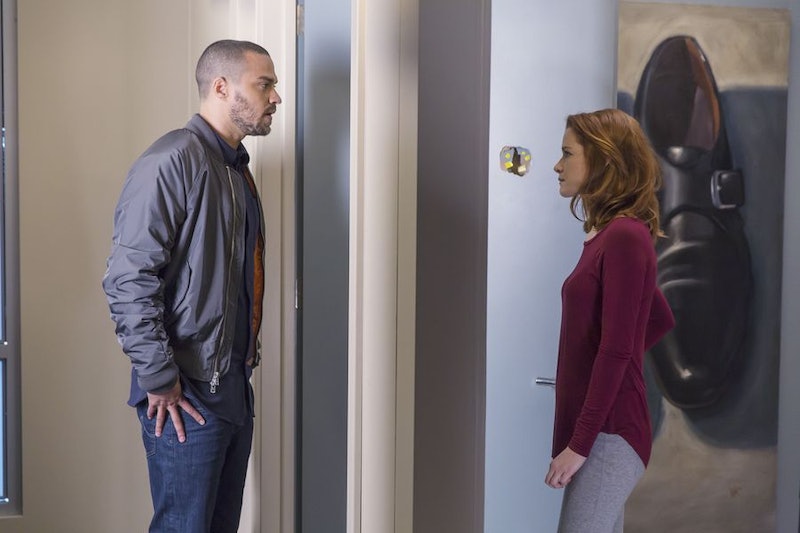 This whole Jackson and April thing on Grey’s Anatomy is pretty much a disaster, huh? They get married, they fight, they get divorced, they have one last fling, and April gets pregnant. Oy vey! Arizona spilled the beans to Jackson about April’s pregnancy, which you knew was going to get ugly. That wasn’t the ugliest part of the episode, though — that came on Grey’s Anatomy when Jackson pressured April to get an abortion and terminate her pregnancy. Yikes.

Now, if you’ve seen more than 30 seconds of April on Grey’s Anatomy, you know that she is very, very religious, so there is no way in hell that April was going to terminate her pregnancy. Jackson and April’s first baby, a boy named Samuel, was born with a birth defect so severe that he died a few hours after being born. Jackson’s suggestion to abort the pregnancy was because of this — he didn’t want to have to go through that again. April, being hopeful or perhaps stunningly optimistic, is convinced their second child won’t have the same defect, said outright that abortion is not an option and was never an option for her, and frankly, Jackson has no rights to this baby because it’s her body and her baby and they are divorced. April told Jackson that he has parental rights when the baby is born and that is it. Bye, Avery. Get out of here.

April only stands her ground when she’s really fired up, and this was obviously something that she felt strongly about. I get why Jackson doesn’t want to go through the tragedy of losing a child again, but to suggest to April that she terminate her pregnancy means that he never really knew her at all. She lives and loves by her faith, and Jackson should know have known that. I guess it shows that they’re really not meant to be together. April and Jackson can co-parent this baby, but they were right to get a divorce.

More like this
Shonda Rhimes Responded To The Surprise Exit Of A Day 1 'Grey's Anatomy' Figure
By Grace Wehniainen
Twitter Is Identifying With Sally Field & Jane Fonda’s Friendship In New Viral Video
By Jake Viswanath
A 'Terminal List' Sequel & Spinoff Are Reportedly In The Works
By Kadin Burnett and Grace Wehniainen
You Might Want To Rewatch This Key 'On My Block' Scene To Understand 'Freeridge'
By Grace Wehniainen
Get Even More From Bustle — Sign Up For The Newsletter
From hair trends to relationship advice, our daily newsletter has everything you need to sound like a person who’s on TikTok, even if you aren’t.