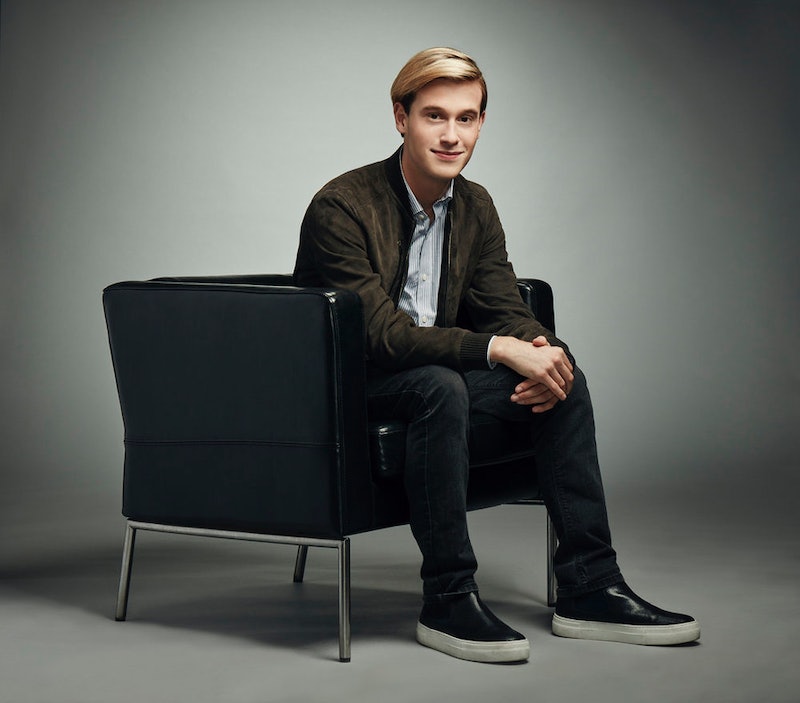 Watching teenage psychic Tyler Henry help celebrities reconnect with their dead loved ones in Hollywood Medium Season 1 was entertaining and emotional enough to warrant a second season (and a third, and a fourth). If you're not a famous person, however, getting an appointment with Henry gets a little more complicated and a probably a little more expensive. Unfortunately, if you're wondering how much does an appointment with Tyler Henry cost, the answer is as unclear as what could come through in a reading with the medium.

The Hollywood Medium's rates are not easily available on his website, but that's where you can fill out a form that will put you on a waiting list to meet with Henry. Unfortunately, that list can get very long, and with his shooting schedule, chances are you're going to have to wait for a while. It might actually be easier to get an appointment with him if you're famous, since his website also has a section for entertainment industry folks, too. So if you're an actor or reality star, it's possible to circumnavigate the very long wait.

But for all of the non-A-listers out there, fear not. There are a few ways you can avoid waiting for the six months or more before getting the opportunity to hear from Henry, and potentially even save some money on the reading.

You Can Enter A Giveaway

Keep your eye on Henry's Instagram, Facebook, and Twitter pages, and you'll have an opportunity to apply for a shot at a free reading. Given his popularity, the odds will be steep, but maybe you'll get lucky.

You Can Go To A Tyler Henry Tour

Good news to Henry's fans — he's going on tour. According to his website, Tyler Henry is touring in 2020 with a 35 city live tour. The dates are not available yet on his site, but it's certainly one way to get yourself in the same room as the medium and hope that he connects with you for a reading.

Although tickets aren't available yet, chances are prices for Tyler Henry's show will run relatively similar to his previous live shows. Depending on the access you want to Henry (and how close you want to be to him), you could be paying anywhere between $55 for a balcony seat to $75 for an orchestra seat. These prices will most likely vary based on city and theater location.

You Can Read His Book

Henry released his book Between Two Worlds: Lessons From the Other Side in August 2017. It's currently available online (for $16) and in stores. While the book isn't a personal reading from the medium, it does dive into his own history with reading people and being clairvoyant, as well as the impact readings can have on you and loved ones you would like to connect with.

Or You Can Host An Event For Him To Attend

On his site, Henry has a form you can fill out if you would like him to attend an event that you're hosting. You might need to be patient, since he has a busy schedule, but if you're already hosting a big event for a few hundred people and are desperately in need of a celebrity guest, maybe Henry is your answer. Plus, then everyone going to the event can chip in.

At The Very Least, You Can Tune In To The Show

It may be a long wait and possibly an expensive prospect to get a reading from Henry, but as long as you already have a TV or computer, it shouldn't be too hard to live vicariously through the celebrities who get readings on the show.

This article was originally published on April 10, 2016