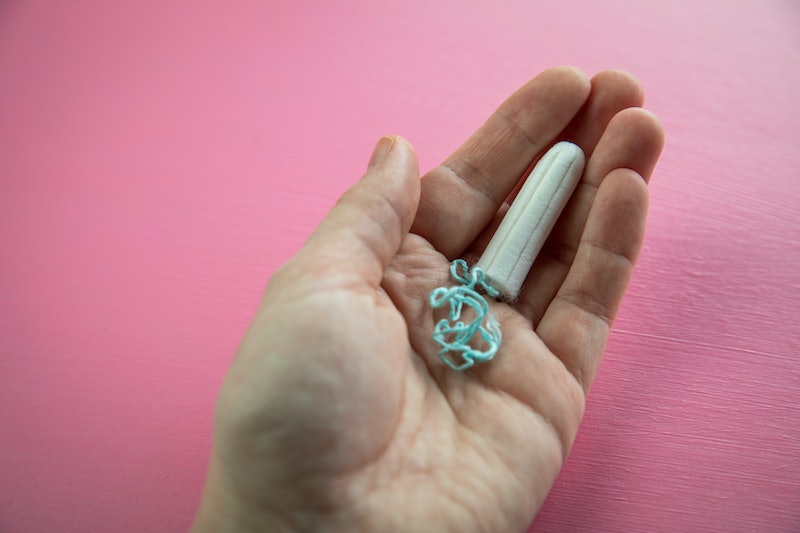 At the first sign of our periods starting, most of us reach in our bags and pull out a trusty tampon. There are now many other competitive period products from cups to special underwear, but tampons still reign supreme in the aisle labeled “feminine hygiene.” While it seems most people who menstruate have used a tampon at some point in their life, things that happen to your body when you use a tampon is still a bit of a mystery.

The word “tampon” comes from the French “tapon” meaning “plug, or "stopper.” The origin is Germanic stemming from “tap” (like the thing that pours your beer), and the products popularity may date even farther back than its derivation. There is evidence to suggest that the Ancient Egyptians, Greeks and other early cultures were using natural fibers such as softened papyrus, lint, wool, and even grass to plug up the menstrual flow.

The modern tampon is made predominantly of cotton blended with rayon. The Tampax tampon, the first to come with an applicator, was introduced to America in the late 1930s. By 1979, tampons had become a popular, widely used method of period protection, overtaking disposable pads. Recently, the tampon’s possible detrimental effect on female health has been hotly debated. Scary stories of Toxic Shock Syndrome and intense FDA guidelines, make this product surprisingly complex. Tampons are even classified as medical devices because “they alter the biological functionality” says Discovery News. Here is exactly what is happening to your body from the time of insertion to when you toss it in the trash:

When first learning to use tampons, you can’t be shy about anatomy. Having your period makes you get up close and personal with your vagina, and its many magical mysterious systems.

When attempting to put in a tampon, anxiety may make the muscles tense and it will be uncomfortable to insert anything. In order to get the little tube in, the vagina muscles need to relax. Most suggest that inserting while squatting with legs open or putting one foot up on the toilet is easiest. The vagina is lined with ringed muscular ridges, that expand during sex, or childbirth. They only expand as far as they need to in order to accommodate what is inside, hence why a tampon will not "fall out." The smallest size tampon should be used when first learning, but if the discomfort or pain continues, this may be due to Vaginismus. This condition is an involuntary contraction of the pelvic floor muscles. It may feel like the vagina is "too small" but it can actually be fixed by doing exercises, such as Kegels, to control these muscle spasms.

2. If Inserted Correctly, You Don't Feel Anything

When first learning to use a tampon, many people are scared to fully insert it. According to The Period Blog, when you wear a tampon properly, it sits in the upper two-thirds of your vaginal canal which is on average three to four inches long. The part of the vagina closest to the base of your uterus is less muscular than the area closest to the cervix. It also has more nerves that are sensitive to pressure than touch, so it will not actually "feel" the tampon. If you do not fully insert the tampon, the area near the vaginal opening is very sensitive to touch, which is why if the tampon sits too low you will feel it. To insert all the way may get your fingers a little messy, but period blood isn't bad for you, and it doesn't contain harmful bacteria. Just wash your hands before and after inserting a tampon and everything will be all good.

3. The Vagina Becomes Dried Out

Tampons are made primarily from cotton and rayon which are two of the most naturally absorbent fibers. They soak up everything indiscriminately, from your menstrual flow to the natural lubricating fluid and bacteria that lives in the vagina year-round. The porous membrane on the walls of the vagina is most similar to the tissue found inside the mouth. If it is uncomfortable to remove the tampon, it is likely that the environment is a bit too dry, causing friction.

4. Your Body Chemistry, pH Balance, And Bacteria May Change

Natural yeast, bacteria, and other microorganisms help keep the vaginal ecosystem healthy. The correct pH levels (the vagina's acidity levels) discourage the growth of bad bacteria allowing it to essentially clean itself. No other products like soap or douches are necessary as pH is balanced by the fluids and good bacteria — even during your period. This delicate ecosystem may be thrown off by the appearance of any foreign object, including a tampon, which changes the balance of fluids. This can lead to possible irritation, infection, or an overgrowth of bad bacteria. If wearing a tampon feels uncomfortable, it should be removed immediately.

5. The Tampon Expands When It Comes Into Contact With Fluids

Most tampons have been built so that they can expand when exposed to moisture. Once inside the body, the fibers loosen and soften to absorb more fluid, keeping any menstruation from escaping and ruining another pair of panties.

6. Your Skin May Tear A Little Upon Removal

Discovery News suggests that inserting and removing a tampon can lead to micro-tears in the vaginal wall. The tampon may also leave behind loosened fibers that make a good breeding ground for bacteria. These micro tears may become an issue when the tampon dries out the vagina, leaving it slightly more susceptible to abrasion and changing its natural fluid balance. Bad bacteria may be able to enter bloodstream through small cuts, leading to the rare but dangerous Toxic Shock Syndrome (TSS). Take precautions by using the lowest absorbency tampon possible, as well as switching it up with a pad now and then.

7. Things Return To Normal Once The Tampon Is Removed

Be sure to change the tampon every four to eight hours max. Waiting any longer can lead to serious repercussions — like overgrowth of bacteria. Pulling out a dry tampon is unpleasant, and the more moisture it has absorbed the easier it is to remove. Most people suggest sitting on the toilet to take it out, and then wrapping it in toilet paper and tossing it in the trash (not flushing it). If you experience any symptoms such as dizziness, sudden fever, vomiting or a spreading rash that could be a sign of TSS and should get help immediately. Otherwise, the vagina will return to normal and will start to rebalance itself once the tampon is removed.

This article was originally published on April 8, 2016