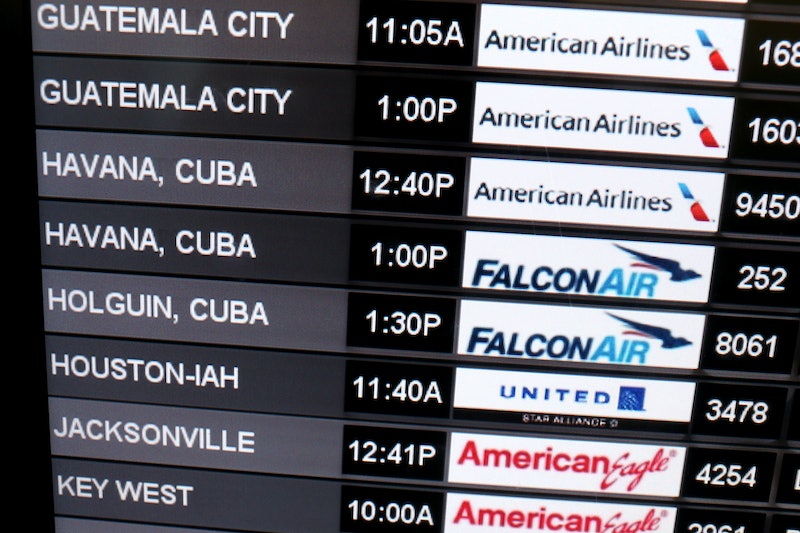 Want to visit Cuba? You're not alone. A new poll shows that the majority of Americans support an end to the United States embargo on Cuba, reflecting a continuing trend of support to reestablish ties with the country. Residents of Florida and Latinos are even more supportive of ending the embargo than the nation as a whole, as the issue over the long-standing diplomatic stalemate with Cuba continues half a century later. The U.S. trade embargo on Cuba was established in 1960 following the revolution that put Fidel Castro in power.

The poll, released by the Atlantic Council's Adrienne Arsht Latin America Center, found that 56 percent of Americans support a normalization of relations between the U.S. and Cuba, compared to only 35 percent who oppose it. But the numbers spike in the state closest to Cuba — Florida — where there is a sizable and influential Cuban population. Sixty-three percent of people in Florida support normalization, and only 30 percent want to U.S. to keep the embargo in place. Over 70 percent of the Cuban population in the U.S. live in Florida, according to a Pew Research report.

"Basically what it says is that most Americans think we should have normal relations with Cuba," Mark Hanson, Senior Associate at Washington Office on Latin America (WOLA), tells Bustle. Over 400,000 Cuban-Americans travel to the island each year, Hanson said, putting pressure on the U.S. to rectify the issue.

Support was also strong for putting an end to the travel ban on for non-Cuban U.S. citizens to Cuba, and for allowing Cuba's access to basic necessities that are available in the United States. Sixty-one percent of Americans and 67 percent of Floridians support ending the travel ban. Cuba is 90 miles away of the coast of Florida. So that old myth that a president can't win Florida without supporting the embargo? It appears the opposite is becoming true.

The new poll shows increased support for an end to the Cuba embargo than previous polls. A 2009 Pew Research poll showed that 52 percent of Americans wanted to reestablish ties with Cuba, while 33 percent opposed it. The strength of support for Cuba is also higher among liberal Democrats than Republicans; a Gallup survey puts twice as much support on the left, at 73 percent, compared to 36 percent for those who identify right.

The poll follows several recent incidents of prominent figures who have made statements about Cuba. Former Republican Gov. Charlie Crist, who will be running for office again in November as a Democrat, recently spoke out about the embargo during a TV interview. Crist told HBO's Bill Maher that, "I think it's the right thing. The embargo's been there, what, 50 years now? I don't think it worked. It is obvious to me that we need to move forward and get the embargo taken away."

Wealthy Cuban-American sugar baron Alfonso Fanjul, a political donor and who has previously held meetings with the Clintons, recently expressed interest in investing in Cuba. "I would love to go back to Cuba, if there is a way to do so,” he said, adding, "We cannot invest in Cuba just yet. How can we if we don’t have legal authorization to do so?" The businessman's questioning of whether the current U.S. approach to Cuba is right is "a very big deal," according to Hanson.

While Cuba looks increasingly likely to become a political talking point this year, Hanson says that the poll numbers are just one small piece of the puzzle. Several members of congress have been sending letters to President Barack Obama, who has the power to to make allowances for travel and commerce between the U.S. and Cuba. And even if those politicians who have spoken about the issue don't wholeheartedly believe in it, they still feel there is an "electoral advantage" in discussing it, Hanson said.

"It's difficult to say what will happen in Cuba. Raoul will be president until 2018," Hanson says. "We have seen capitalist countries with authoritarian governments: that exists."