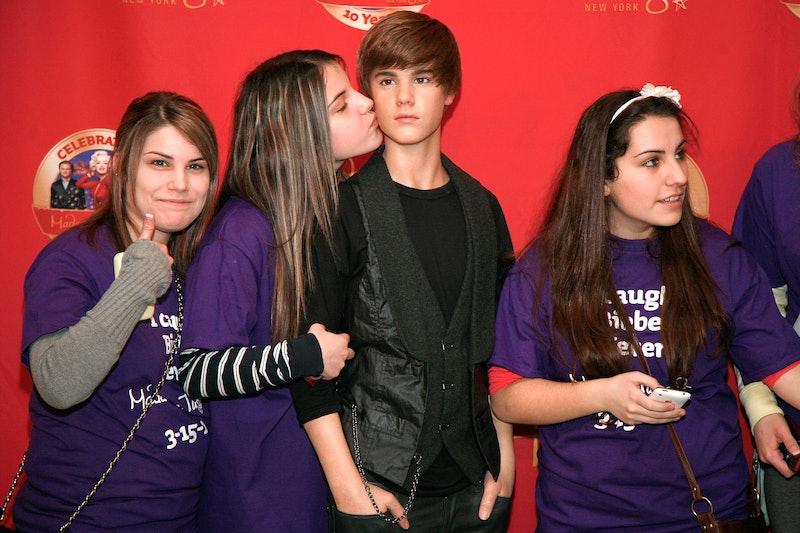 It's hard being Justin Bieber. People try to harsh your sweet buzz by searching your hot-boxed private plane for marijuana. Brazilian women film you while you sleep. Cops harsh your buzz yet again by arresting you just for trying to get your thrill on with some wasted suburban car racing in the company of an impressively eyebrowed model/entrepreneur/assailant. You can't grow a real mustache. Basically, it can be super exciting, also often a drag, and just generally confusing to everyone even peripherally involved. The point is: It's a hard life for Justin Bieber, but it might be an even harder life for Justin Bieber's Madame Tussaud's wax figure.

Here's what went down: Justin Bieber's wax figure's been sitting in the New York Madame Tussaud's wax museum for a while now, swooping bangs and Canadian plaid and everything. During that time, it's presumably just been standing there, all waxy-like, partying with the Katy Perry and Robert Pattinson figures at night and begging the Michael Jackson one for tips.

During the daytime, however, something even more lurid was occurring: Bieber was getting hella groped. In a twist surprising absolutely no one but which certainly elicited an extended "yeeech" from this writer, Bieber's belieber fans can't seem to keep their hands off his wax figure (I'm really hoping that's a euphemism), and that strange brand of affection has led to the rapid deterioration of the figure itself. It's almost like a super tragic metaphor for Bieber's real life or something.

Bret Pidgeon, who by his name sounds like the lead in a New Yorker short story but who is, in reality, the general manager in charge of all the Madame Tussaud's wax figure's shenanigans, commented that the compromising of the figure and its subsequent removal from public display is "disappointing, but hopefully we can welcome a new 'grown-up' Justin back to the attraction in the near future."

Whether that more grown-up Bieber will carry a can of spray paint and a tear on his face courtesy of the Selena Gomez figure is yet to be seen.