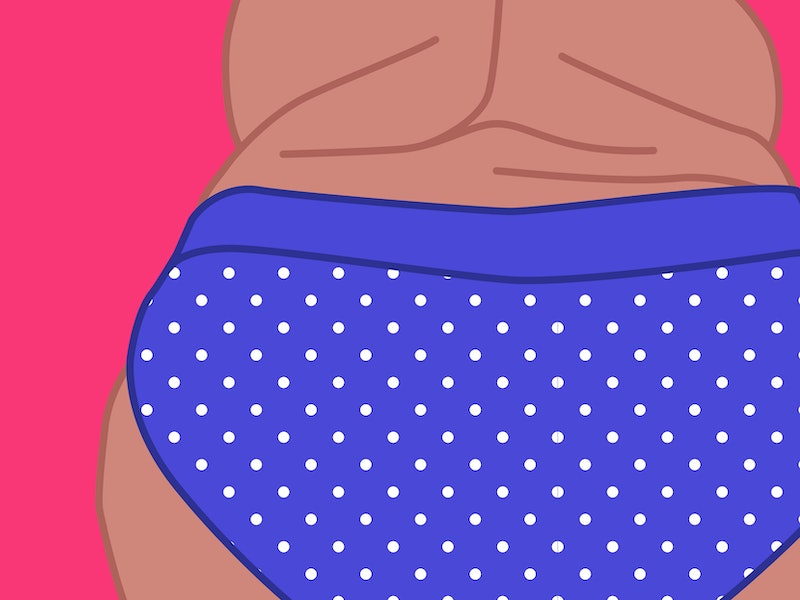 If ever a list of the most loaded terms in this world was put together, the word fat would undoubtedly be on it. Most dictionaries can agree that "fat is a natural or greasy substance occurring in animal bodies." Most people would probably agree that fat is just about the worst thing a human being could ever be. Young girls are reportedly more afraid of becoming fat than of getting cancer. And why shouldn't they be, right? Fat people are deemed an infectious disease by Reddit and FLOTUS alike.

In reality — as photographer Substantia Jones of The Adipositivity Project once put it — "The word fat is a morally neutral descriptor, while overweight is a term of judgment, and obese pathologizes that which is naturally occurring." Ultimately, fat should just mean fat: the jiggly stuff a load of people have that can be touched and grabbed. Or an accurate descriptor for those whose bodies are visibly and indisputably plus size. Unfortunately, it's not often allowed to be just that. The three-letter F-bomb is connoted to a whole heap of outside adjectives that take it from the neutral aesthetic descriptor it should be to a source of implied morality and some kind of success. In light of that, let's take a moment to highlight all the things that fat is actually not.

Beside the fact that most people are more complicated that "virtuous" versus "sinful" (if you watch a single episode of Game Of Thrones, you will soon realize that good people do bad things, and vice versa), one's physical weight is never emblematic of one's values.

If ever you Google image search "fat political cartoon," be prepared for the barrage of fatness depicted as greedy. Portly bankers, stout government official, capitalism-driven chubsters, fat Uncle Sams: They're all there. That's because, you know, in order to get fat, people must have a lot of money for all that food. They mustn't care about how many folks are starving in this world. They mustn't care about anything outside their own lust for wealth and corpulence. Right?

Here's the thing: Human attraction is subjective. If ever you've caught a glimpse of someone on the subway from across the car — your eye instantly drawn to them — and thought, "Wow. What a babe," my guess is you didn't spend the next 15 minutes psychoanalyzing what it was about them you found attractive. You were drawn to something you felt was beautiful, and your body reacted accordingly.

To say that any one aesthetic trait is "ugly" or "beautiful" without ensuring that it's clear that you're expressing your opinion alone is always going to be an inherently flawed statement. No one person gets to define "beautiful" or "ugly." Because no one person can speak to the personal and biological ways anyone else perceives attractiveness.

Similarly to connotations of greed, thoughts on corruption are slapped onto the word "fat" every which way. It's why whenever New Jersey Governor Chris Christie's questionable politics are brought into the equation, his weight is almost always mentioned alongside them. It's likely why Ursula is one of the only instantly-recognizable fat characters to have ever existed: People just love the idea that your fat makes you evil.

Historically, fatness has been emblematic of two very distinct economic statuses. As recent as the late 19th century and still in many developing nations, it has signaled financial security, if not wealth. If you are fat, it is because you have the money needed in order to become fat. More than likely, fat, wealthy folks in history were also deemed greedy pigs.

Fatness has never not been an issue of class. But the truth is that fat people can be fat for a variety of reasons. Their appearance alone will never reveal what neighborhood of New York City they live in. Additionally, your paycheck should simply never be a marker for how much tolerance you are deemed worthy of.

For most of my adolescent life, my best friend and I ate the same meals — oftentimes in the form of hardcore junk food. Neither of us exercised, either. We preferred listening to Mayday Parade and painting our nails black without parental consent. Yet she weighed 115 pounds while I weighed 215.

Health is not something that can be garnered from the eye alone. To assume that a person's weight can tell you what is clinically going on inside their bodies is not only scientifically impossible, but wholly bigoted. I have weighed anywhere between 160 and 260 pounds in my adult life, and at no point could the stranger trolling me on social media know my cholesterol levels or blood pressure or whether or not I have a thyroid condition or the ratio of my subcutaneous versus visceral fat. It's just not possible, guys.

I agree wholeheartedly with blogger Gabi Gregg's thoughts on the inimitably stylish Callie Thorpe of From The Corners Of The Curve. But I'd extend the tweet even further: How anyone could still think that fat women are inherently unworthy of fashion, or unable to put together the most killer of outfits, is beyond me. Just take a look at any of the numerous plus size bloggers out there who are equal parts visibly fat and sartorially genius.

Please take a moment to Google the likes of Whitney Way Thore, Jessamyn Stanley, or Glitter And Lazers. Who knew fat people could do yoga, right? Who knew that fat people could move their bodies to the sound of Jason Derulo like any background dancer in a Beyoncé music video?

There's a horridly common misconception out there, that to put quite simply, fat people never move. They don't just not exercise. They also don't work. They don't bathe. They don't do much outside of play video games while munching re-heated mini burgers.

Such generalizations are 100 percent unfounded, of course. But let's say some of them were true. Imagine someone actively choosing not to prioritize fitness or nutrition. Or even contemporary interpretations of what it means to have a job. How those choices would ever be anyone else's concern — outside of the person making them — is inexplicable to me. Whether your best friend or the stranger whose profile your creeping on works out every day or never, it's not anyone's place to dictate the lifestyle they should be living.

At this very moment, there are very likely hundreds, if not thousands, of fat people fucking all over the world. They are having their rolls shaken; their double chins nibbled; their visible belly outlines kissed.

I would never want to downplay the severity of size discrimination, because its effects are incredibly real. Not just on a personal level, but on a political one.

But every so often, I'll click on a visibly fat person's Instagram account (if not my own) and there will sometimes be a troll or two going on about the immorality and general undesirability of fatness. And then there will be a do-gooder: Someone who tells those trolls, "Please leave them alone. Fat people cannot help being fat. She's probably got some kind of medical condition. Maybe it's a slow metabolism. Nobody can help that!"

I don't doubt that these sentiments are usually well-meaning, and for a lot of fat folks, those words might be true. But constantly equating fatness to illness victimizes the body type in a way that isn't warranted.

In my eyes, there are few clearer examples of fat bias in this world than the mere fact that "obesity" (a term really only meaning having a Body Mass Index higher than 30 — a term that actually reveals nothing about health) is deemed an "epidemic." In other words, an infectious illness. One that will contaminate other people and spread disarray in its wake. One that threatens the livelihood of all the children.

Imagine being told that your body is a disease when you're a kid. Imagine seeing the First Lady Of The United States go on television to specifically discuss how flawed, automatically unhealthy, and threatening your body type is. I would never want to discourage anyone from researching our food supply and learning more about how the things we're eating often have the potential to harm us. But to tell fat people that they are an infectious disease? News flash: You can't catch fatness. Back boobies will not appear on your body if you are in the presence of obesity for too long. To ever vilify an entire group of people in such a way will only further marginalize that group of people.

Fatness isn't any of these things. It can never be ugly, or automatically unhealthy. It will never be a physical, easily identifiable symbol for how much money is in your bank account. What fatness actually is? A pretty normal part of human existence. We need it to survive. Some of us may have more than others, but guess what? Your fat rolls are fly as hell. They aren't just beautiful. They're fun to play with. They're soft. They are all unique. They make your body your own.

Want more body positivity? Check out the podcast below, and be sure to subscribe to The BodCast for more radical self-love inspo!

More like this
Most Comfortable Underwear For Big Butts
By Audrey Williams
Strictly’s Rose Ayling-Ellis Has Introduced The First Barbie With Hearing Aids
By Darshita Goyal
42 Black Owned Fashion & Beauty Brands To Support Today & Always
By Mekita Rivas, Shea Simmons, Kui Mwai and Dominique Norman
11 Graduation Guest Outfit Ideas To Wear To Someone Else’s Ceremony
By Phoebe Avison and Claire Fox
Get Even More From Bustle — Sign Up For The Newsletter