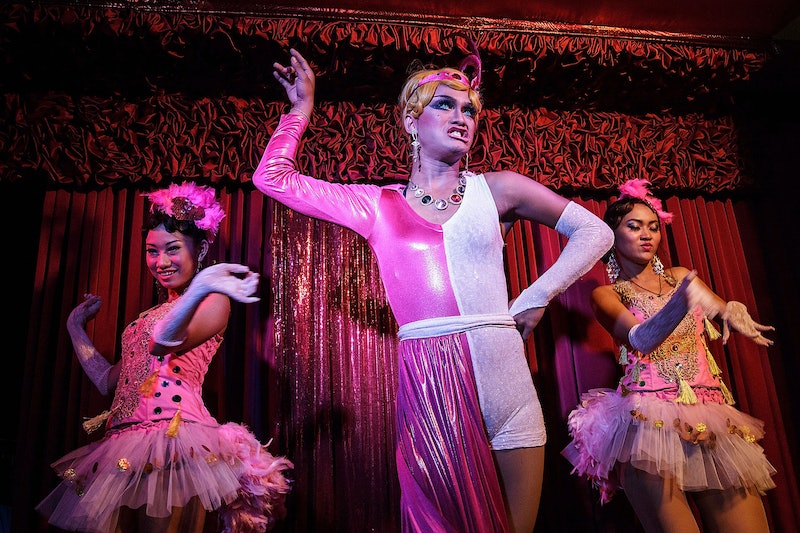 If there was ever a wonderful response to rampant homophobia, this is it. When restaurant owner and white supremacist Gary James declared last week that his Oklahoma establishment, Gary's Chicaros, was off-limits to gay people — oh, and black people, the disabled, and people on welfare — his restaurant started to get an awful lot of reviews on its Facebook and Yelp pages. But not the "you'd rather walk on hot coals than walk into this guy's restaurant" kind. Nope: The many, many Internet reviewers declared Gary's Chicaros the best gay establishment in Oklahoma, if not all of America.

"If you enjoy a long hunk of man meat with your well done cow meat," wrote one reviewer, "the Chicaro Club is the place for you. Gary has truly outdone himself with the flamboyant, free atmosphere in his place."

Added another: "Gary does't serve tube steak. He asks for yours when you walk in the door. But don't ask to use his backdoor, he saves that for minorities. Pretty cool gay bar though."

The mission to rebrand Gary's Chicaros as a tongue-in-cheek gay establishment, complete with enough one-star rankings to drag the restaurant down to the lowest possible rating, has become a viral phenomenon. Last week, James told his local news station that he simply wouldn't serve “freaks,” “f-ggots,” the disabled, or people on welfare. Past customers had told the news station that, yes, this was unfortunately true.

The official T-shirt of Gary's Chicaros reads: "Where The Great Whites Gather." Underneath, it adds: "N----- Free Zone," in case you had any doubts.

Gary's restaurant is now notorious on the interwebs for being "the best gay club around!", amongst other things. According to one particularly wonderful Yelp review:

This place was fabu! Best little score-house in Enid, where everything is a-OK. I was told to dress up in "whatever makes you feel Sacrelicious, because *everyone* is welcome at Chi-Chi's," and so we did!...

Once we were greeted and sufficiently groped by the owner Gary James (she was a flawless Southern debutante that night as Mary Flames), we followed her sultry saunter to our retro porn mag shellacked table top...All in all I give this place 3 stars, since the 1980's soft-core "wrestling" videos projected on the walls were kinda cheesy, the floors in the back were hella sticky, but the nibbles (both food and go-go boys) were pretty delish and the thumping disco beats gave me the vapors! Thanks for the last call champagne toast and your stellar performance to Donna Summer's "Last Dance" at the end of the night, Mary! We'll be back for next month's much-anticipated event, "Apple Bottoms in the Garden of Enid!"

I am not anti homosexual, however I did find this place way too flamboyant for my liking. The wait staff and the cooks all have coordinated uniforms but I am not sure that open vests with Speedos really meet health codes. The waiter told me this place was known for its Special White Russians made with imported Rico Cream. I said ah you import cream from Puerto Rico? He said no the bartender's name was Rico.

James has refused to talk to reporters about whether the restaurant has seen an uptick in clients, or a whole new clientele, but we like to imagine him seething quietly in an empty Oklahoma restaurant. Because, when it comes to homophobia:

UPDATE: Yelp has disabled all reviews of Gary's Chicaros restaurant.

RELATED ON BUSTLE: Barilla Doesn't Want Gay Customers: What Companies Are Most Homophobic?

More like this
The Most Powerful Photos From The Weekend’s Abortion Rights Protests
By Melanie Mignucci
Why You're Seeing Green Bandanas At Abortion Rights Protests
By Lexi Inks
Aesop's Queer Library Is Open
By Tomi Otekunrin
How To Come Out Online, According To Trevi Moran
By Melanie Mignucci
Get Even More From Bustle — Sign Up For The Newsletter