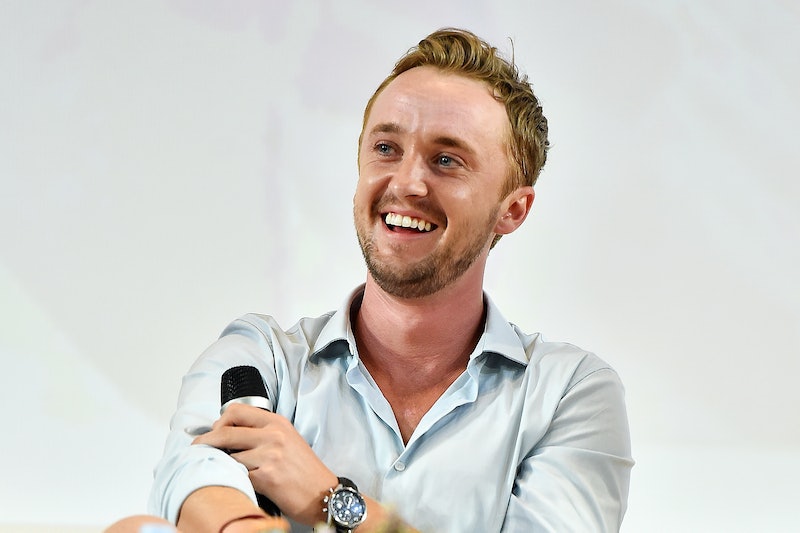 When I visited Los Angeles' Wizarding World of Harry Potter to interview Harry Potter star Tom Felton, the actor — who plays Draco Malfoy in the series — wouldn't shut up about how much he admires two of his co-stars. Though Hermione's Emma Watson admitted Tom Felton was her first crush, Felton may not have felt the same about her. Instead, the HP actor reveals he has a big fat mancrush on Mr. Ronald Weasley. Yep, the ginger-haired Gryffindor played by Rupert Grint has Tom Felton in a tizzy.

While their bromance budded on set, it was solidified in 2011 when Rupert Grint showed up to support Tom Felton's movie Rise of The Planet of the Apes wearing a hand-drawn T-shirt that read: "I <3 Tom Felton." Talk about public displays of affection. "He drew it in the car," Felton says.

But his love of his costars extends beyond a mancrush on Grint. And I can't blame him. If you take a look at the cast in 2016, there are a lot of crush-worthy co-stars to swoon over. Take Alfred Enoch, who played the slightly awkward Dean Thomas for eight films. Now, Enoch is anything but awkward, and lends his good looks and acting chops to ABC's How To Get Away With Murder.

And of course, perhaps the most noteworthy transformation is that of Matthew Lewis, who played Neville Longbottom in the films. Once a stuttering, greasy little kid wielding a wand, is now a gorgeous and grown-up muggle. And Felton couldn't help but notice. "I have an affinity for all of the cast. I bromance out with most of them. I mean look at Neville," he says. (For the record, I have). "Once that slightly chubby, geeky kid... is now a rippling mass of muscle and masculinity. How can one not enjoy that?"

Don't worry, Tom Felton, we are enjoying every bit of it.