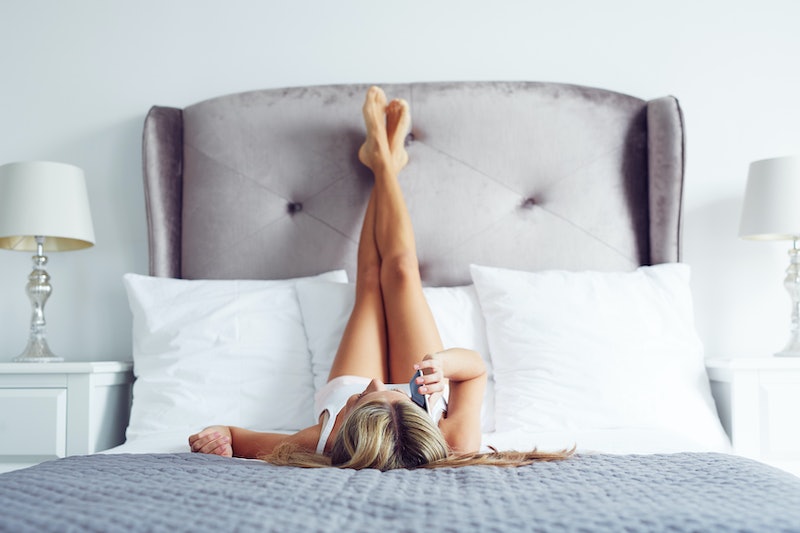 I like to think that after all this hard work — this never-ending longing in my heart, the havoc wreaked on my nerves — we’ll be better for it. Unlike people in relationships where distance isn’t an issue, we’re forced to communicate in ways that strictly involve talking, lots and lots of talking. It’s definitely the most communicative relationship of my life. I’m not sure if that owes itself to maturity or to distance, but because I want to put a positive spin on things, I’m going with the latter.

With all this talking going on, and the two of us severely lacking in the sex department thanks to the big ol’ Atlantic Ocean between us, our banter took a sexual turn somewhere along the line. It had to eventually; considering the ridiculous sex drive we both have, it’s not like either of us would be able to go months without some sexy talk.

It’s not anything daily, but my partner and I engage in phone sex once, twice, sometimes three times a week. At first, I was sort of wary of it. While I can easily write dirty things to him, saying those words out loud brings a whole new level of intimacy, especially when you hear your voice narrating a situation that turns the two of you on. Of course, there’s a back and forth, a dialogue about the scenario, but you’re still saying quite a bit yourself, and probably things that would make a lot of people blush. But, man, once you get the hang of it, it’s so fun.

You don’t have to be in a long distance relationship to engage in phone sex. Even if your significant other lives a block away (or in the same apartment), you can still use it as a great way to keep things spicy and lively in your sex life. Let’s put it this way: once you go phone sex, you won’t go back. Just follow these tips and you'll see what I mean.

Spur of the moment phone sex is great. But if you’re the type of person who gets several calls a day from family, work associates, and friends, then you’ll definitely have to plan ahead. There’s nothing more awkward than being mid-oral sex talk and having your mom trying to click in on the other line. Even if you don’t answer the call, it’s a total boner killer for everyone involved. And if your mom is anything like mine, she’s just going to keep calling until you do pick up. So, choose a time when other calls will be at a minimum, or turn off the ability to get any other incoming calls.

This is subjective. If you feel sexy in your flannel pajamas, then that’s your jam. If you’re someone who doesn’t feel even remotely hot unless you’re in a lacy bra, garter belt and thigh-highs, then put those on. Which clothing choice is going to make the situation feel sexiest for you? That’s the question you need to ask yourself.

When you tell your partner where you are and what you're doing, what do you want that information to convey? Sure, the bed is a great location, but what about the couch? Maybe your ideal spot for such tantalizing chitchat is the living room floor with CNN playing in the background. Find the place where you’ll be most at home, and claim it as your own for the next 45 minutes or so.

This is going to be a walk in the park! Seriously! But if you go into it worrying about what you may or may not say, then you’re already setting yourself up for disaster. This is about fun; it's not brain surgery.

Pardon the expression, but you really do not want to “blow your load” in the first five minutes — and that goes for both parties. Phone sex is not something you do quickly, as if you’re meeting up for a hot and heavy rendezvous on your lunch break. You’ll find that if you start at the very beginning (and very cliché) with the simple question of, “What are you wearing?” things will start rolling from there.

“If I were there, I’d do [insert something awesome and dirty here] to you.” The best part (and sometimes the worst part, too) is that you’re not there, so it amps up the desire factor. There’s a lot to be said for wanting something you can’t have.

I legitimately lived in fear of the word “pussy” for the majority of my life. I hated it so much that I called pussy willows, those furry little plant things, “wussy pillows.” This is not joke, and yes, I realize my creativity needs some work. However, when you’re talking dirty, you should use dirty words. No one wants to be told, “I really want you to put your penis in my vagina.” It’s just, well, technical and lacking in raw sexuality. On the other hand, “I really want you to put your cock in my pussy” might be the winning ticket.

By this point in the game, the two of you should probably be pretty vocal about how turned on you are and what you’re doing to your prospective bodies. Orgasm is not far away! Hold out as long as you can, say all the things you’ve thought but could never say before because you weren’t the phone sex master you’re about to become, don’t care if you stumble over your words as your breathing intensifies and your heartbeat starts to pound — JUST GO FOR IT.

Yes, orgasm! Do it! You’ve put in all this work, now it’s time to climax! It doesn’t matter if you two don’t come at the exact same time! Just let it happen! Be free! Reap the benefits of overcoming any fears you had about the whole thing and scream out the words that one screams when total satisfaction has hit! “Hell yeah, bitches!”

I’m not suggesting some sort of highly thorough breakdown of what was great, weird, or embarrassing about the whole thing. It's more like a mutual pat on the back. I mean, look at you two! You did it! You had phone sex, achieved climax, and it was great! If things can be that good when you’re apart, just think of how great they’ll be when you’re together again. Minds. Will. Be. Blown.