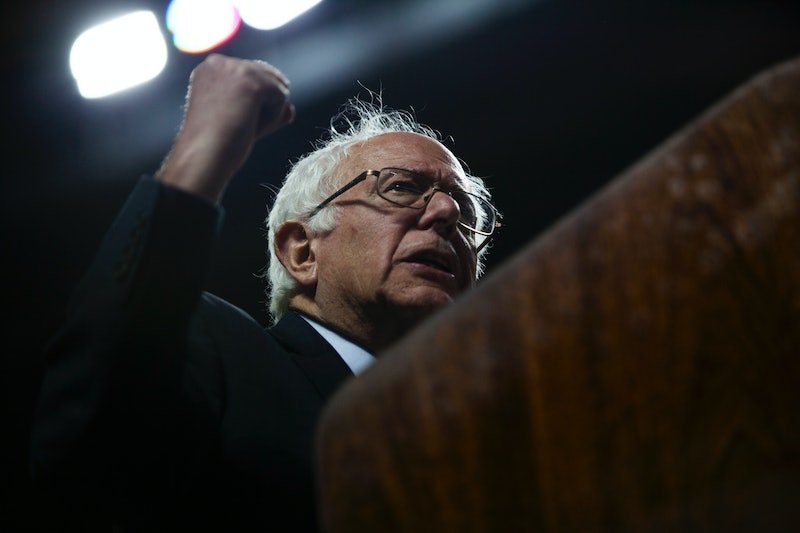 Despite a crucial victory in Wisconsin, Bernie Sanders is having a rough week. For one, he gave a disastrous interview to The New York Daily News. Then, the Vermont senator took a strange swipe at Hillary Clinton. At a rally in Philadelphia Wednesday night, Sanders said that Clinton was not "qualified" to be president. That's right. The best attack Sanders could muster was to claim that the former New York senator and secretary of state, someone who possesses arguably the most extensive and diverse political experience of any candidate in either party, is unqualified.

Sure, Sanders meant "unqualified" more in a moral sense, but come on, dude. You’re attacking from the lower ground here. Maybe Sanders is doing that middle school self-preservation thing where you try to distance yourself from something you’re insecure about by screaming that someone else has that quality that makes you insecure?

Sanders framed the attack as a response to Clinton "saying lately that she thinks that I am, quote-unquote, not qualified to be president.” However, Clinton never actually said Sanders was "not qualified,” so in addition to making Sanders sound uncharacteristically petty, it compounds the Daily News interview mess to make him sound increasingly misinformed.

The sad (and not-smart) part is that Sanders shouldn’t be in this position. His image is usually one of integrity. Jabs that aren't focused on concrete policies really don’t suit him. If he wants to make the case that Clinton — whose campaign has been plagued by accusations of dishonesty, ties to Wall Street, and lack of transparency — is unqualified to be an upstanding president, he shouldn’t be getting dirty himself.

Remember when Jeb (Jeb!) Bush really tried to attack Marco Rubio for the first time in a debate? Rubio was able to shut him down so mercilessly, in part because you could see that Jeb (Jeb!) was more or less a nice guy whose heart wasn’t in it, and had been goaded into attacking Rubio by whomever was whispering in his ear at the time (as Rubio suggested).

That’s what I want to believe is happening now with Sanders, because his campaign is founded on the idea that he is honest and decent and does not roll in the political muck. He's been campaigning (quite successfully) on a reputation of generally rising above the typical political fray, and for the most part, that seems true.

However, from his lazy jab at Clinton to the interview that revealed he may not be as knowledgeable on financial structures and other issues that his supporters would like to believe, Sanders has not been looking so good this week. While I understand that he’s presumably nervous about Clinton’s still-large lead, I personally hope he stops making claims like she's "not qualified" for his own sake. The best thing would be for him to address the weaknesses the past week has revealed in his campaign head-on, rather than try to point the finger at Clinton.