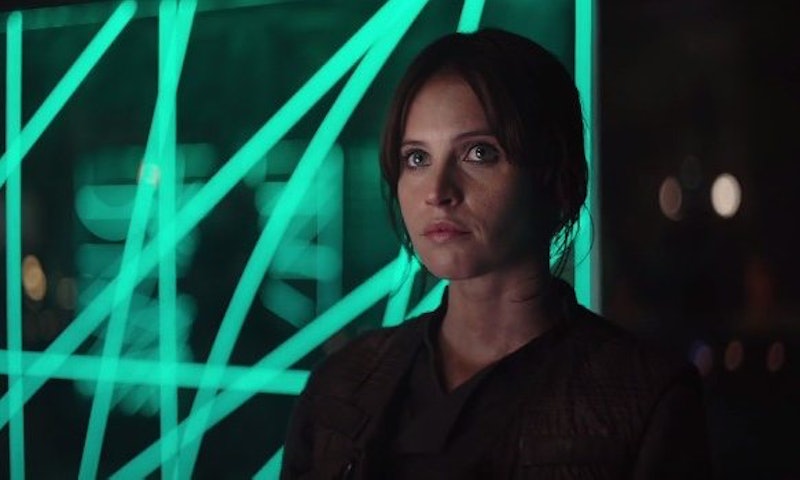 With great female characters come great, big, whiny complaints. Case in point: when the trailer for the newest addition to the Star Wars franchise, Rogue One , dropped on Thursday, it not only broke the internet, but caused some Star Wars "fans" to freak out because of its leading character: a badass rebel named Jyn Erso. Played by Felicity Jones, Erso leads a mission to steal plans for the Death Star before the Emperor takes over, and while many fans, myself included, are thrilled at seeing another woman in a leading Star Wars role, some others are less happy — and wasting no time in making this known.

Although many people are undoubtedly hella excited about the expanded gender universe of the series and are sharing their joy on Twitter, others are not thrilled that Star Wars has now featured two female leads: Jyn and, of course, Rey in The Force Awakens. The sexist tweets about Rogue One are in full force, and unfortunately, they likely won't stop until long after the movie's December release. Here are some of the most frustrating responses:

After folks reacted to this all-too-real and apparent "joke" in a now-deleted tweet I screenshotted, Podhoretz responded by attacking "social justice warriors," i.e. people who are tired of sexist tweets and ready for some Star Wars feminism.

Then there's this. Do I need to explain why this reaction to Jyn Erso is completely screwed up? Or, can we all just shake our heads and understand?

Because Star Wars is about competing for the male gaze. SMH.

Yes. The Star Wars reboots are actually a cleverly orchestrated plot between J.J. Abrams and all women to eradicate cismen.

Yeah, it's a smart financial move — because women want to see some representation on-screen and will undoubtedly head to the theaters.

Whatever nerds, you're not the droids we're looking for anyway.