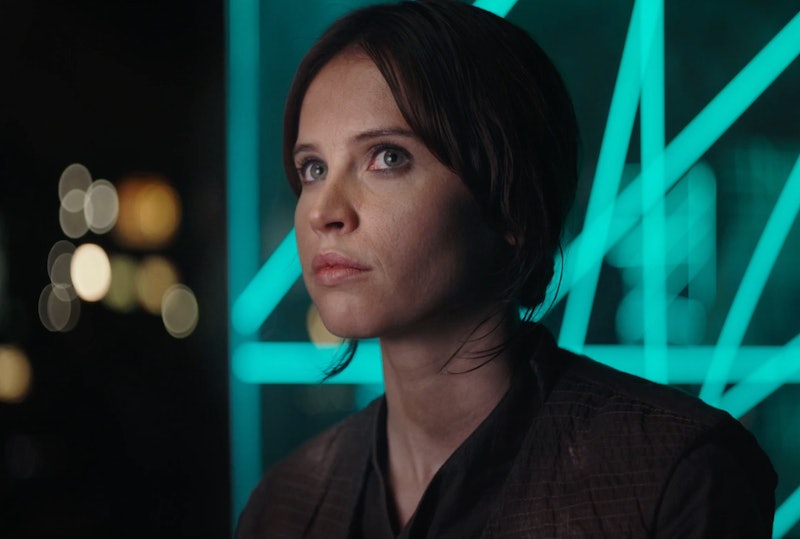 The very first trailer for Rogue One: A Star Wars Story has arrived, and the world will never be the same. The film will kick off a whole series of Star Wars anthology films, spinoffs if you will, when it hits theaters on Dec. 16. Already the teaser has inspired hundreds of questions as to the highly secretive plot and the nature of the characters, many of which remain unnamed on IMDB, suggesting a level of secrecy higher than the Pentagon. The Rogue One trailer does give us a bit more information on the characters and the plot — the film is about rebels who plot to steal the plans of the Death Star somewhere between the events of Star Wars Episode III and Episode IV. However, one thing that stands out in the trailer isn't how it relates to the Star Wars universe, but how it appears to relate to The Hunger Games. Is Rogue One just The Hunger Games 2.0? Let's investigate.

The Hunger Games has largely been credited for kick starting the wave of young, female heroines in action films. So, it's no surprise that Rogue One, which stars Felicity Jones as the young Rebel fighter Jyn Erso, has drawn some comparisons to the Jennifer Lawrence-led franchise. But, the similarities between Rogue One and The Hunger Games go beyond just the sex of their main character. Before we look at the facts, here's the Rogue One teaser:

There is absolutely no denying that the final image of Jyn Erso in the Rogue One trailer looks exactly like Katniss Everdeen in her Mockingjay gear. From the slick, black suit to the equipment on her back (similar to Katniss' quiver of arrows), it seems that to fight the Empire, Jyn Erso must transform herself into...Space Katniss.

The Rogue One teaser trailer doesn't give much information on the mysterious character played by Forest Whitaker, but based on the voiceover dialogue, it looks like he's a good guy worried about Jyn Erso and guiding her to become a better rebel soldier — "What will you do if they catch you? What will you do if they break you?!" Could he be another slightly battered and bruised man who reluctantly guides a young hero through hardships?

Ben Mendelsohn looks strikingly evil in this short clip from Rogue One. There are a lot of theories about the nature of his character — could he be Jyn Erso's father, or Rey's grandfather? — but I'd like to suggest a new one: he's really a younger President Snow, bringing his dictatorial aspirations to a galaxy far far away.

A cool, calm, collected and impeccably dressed female leader of a rebellion? If The Hunger Games' President Coin has taught us anything, it's that women such as these can't be trusted.

I don't know whether or not Diego Luna's sexy rebel fighter will end up being a love interest for Jyn Erso, but let's just say that he's definitely the male heartthrob of the film, or, at least, the trailer.

I mean, I get that The Hunger Games didn't invent apocalyptic, bare and dry lands, but the image of stormtroopers patrolling a dry, desolate town looks an awful lot like the Peacekeepers that came into District 12 in Catching Fire.

Water, palm trees? Is it just me, or could this Rogue One battle have taken place in a Hunger Games arena?

There's also the constant threat of death from a tyrannical government thing, the brunette thing, the soldier who doesn't like rules thing. But, really, even though the Rogue One trailer does share a lot of similarities with The Hunger Games films, I have no doubt that the movie will be completely different. And, even if it isn't, I'm not about to complain about seeing another kickass woman taking down evil onscreen.

You do you, Space Katniss. I mean, uh, Jyn Erso!