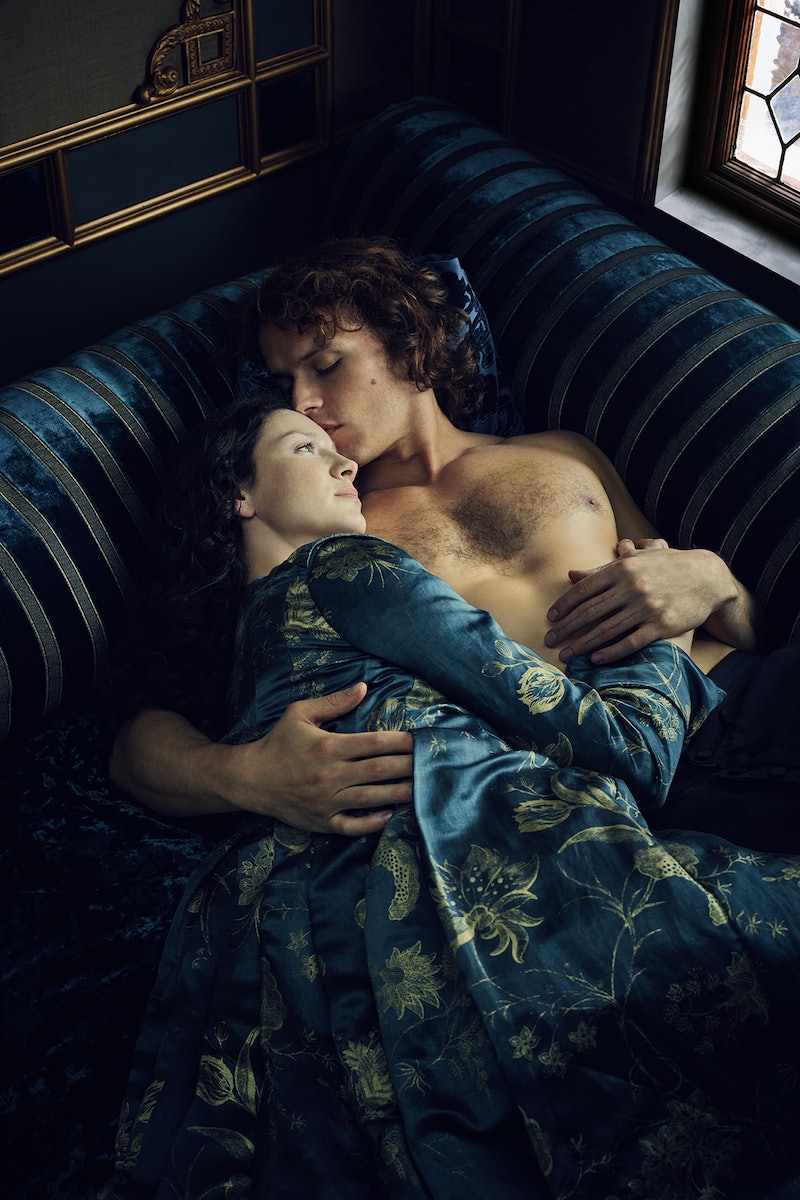 Anyone who watched the Outlander Season 1 finale knows the kind of pain Jamie Fraser was forced to go through at the hand of Black Jack Randall. And even though Claire has certainly helped him throughout the initial part of his recovery process, that doesn't mean he's completely cured by any means or out of the woods just yet. Sam Heughan, who plays Jamie Fraser on the series, recently shared a few Outlander Season 2 spoilers with Bustle at the red carpet premiere and teased how Jamie's PTSD will impact his relationship with Claire moving forward.

"He's still sort of suffering trauma," Heughan reveals. "He's not cured physically or mentally and he throws himself into this mission to change history and stop fate." However, in doing so, he ends up burying his feelings about what happened to him, which will eventually create a major divide between him and his beloved Sassenach. "He's not dealing with the personal problems between him and Claire and ultimately they lose contact with each other," the actor reveals.

And while the thought of seeing these two drift apart sounds like an unbearable thing to witness, we should have every confidence that they'll manage to find a way back to each other, both emotionally and physically.

The kind of love that they share can never be ruined, even by the psychological trauma Jamie has recently faced. Black Jack Randall did everything in his power to taint Jamie's relationship with Claire, but in the end we have to believe that true love will prevail. It has to. And if given enough time, viewers will see the old Jamie we came to love return in full force at some point down the line. But in the meantime, it's not going to be an easy process, so prepare yourselves for a rough ride. And maybe have a box or two (or ten) of tissues ready.

More like this
The 'Kenan & Kel' Reunion On 'SNL' Took A Dramatic Turn, Thanks To Keke Palmer
By Brad Witter
Keke Palmer Just Announced She's "Going To Be A Mom" On 'SNL'
By Brad Witter
This 'White Lotus' Symbol Could Hint At A Major Character's Death
By Grace Wehniainen
The 'Firefly Lane' Book Ending Teases Way More Tears To Come In 2023
By K.W. Colyard
Get Even More From Bustle — Sign Up For The Newsletter