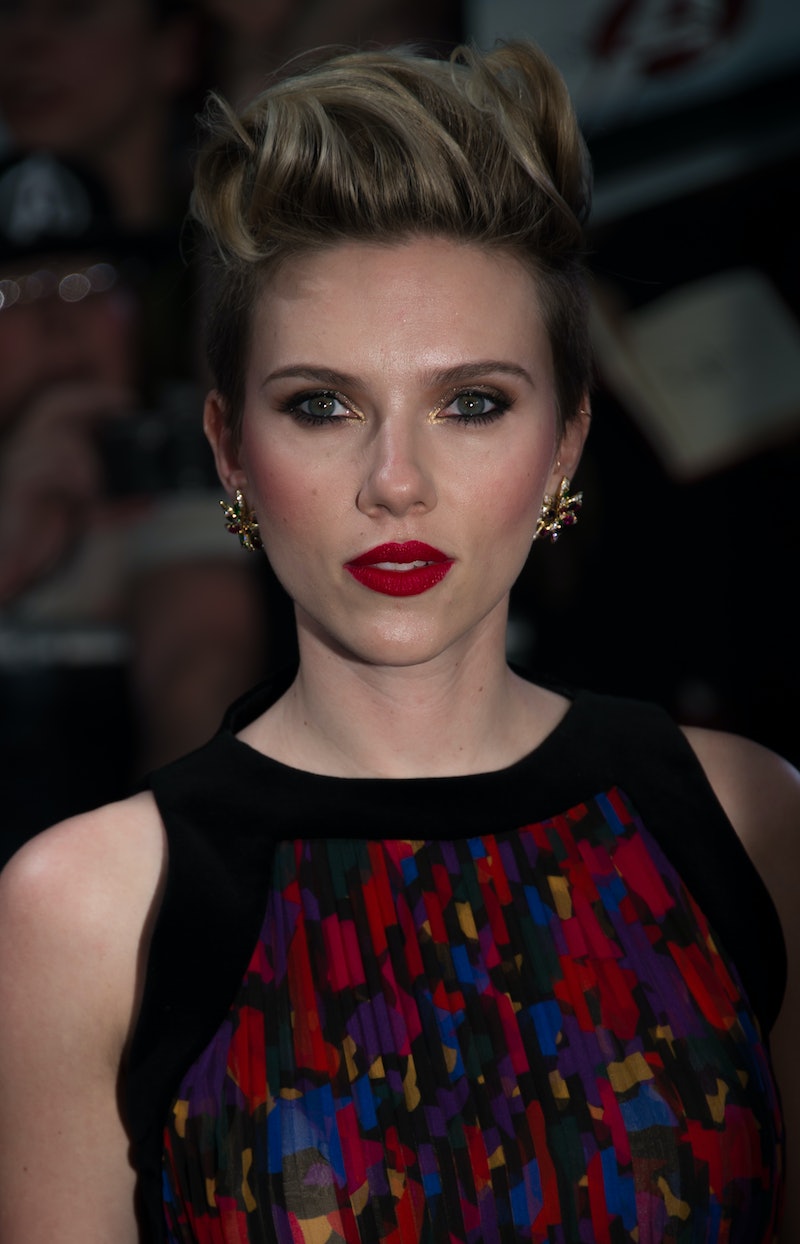 Joining feminist, outspoken celebrities like Jennifer Lawrence, Jessica Chastain, and Amy Schumer, Scarlett Johansson addressed the gender wage gap in this month's issue of Cosmopolitan. This comes seven months after Lawrence penned an essay on the issue for Lena Dunham's feminist email newsletter, Lenny Letter, in which the Hunger Games actress exposed her own experiences with sexism in Hollywood and unequal pay. Since Lawrence's concessions, the wage gap in Hollywood has (thankfully) become a highly discussed topic. Some of Lawrence's former co-stars, like Bradley Cooper, have openly supported the letter, while other women in the industry have praised her honesty. Now, it seems more and more celebrities — like Scarlett Johansson — are being prompted to share their feelings on the matter.

Johansson told Cosmo, "There's something icky about me having that conversation unless it applies to a greater whole… I am very fortunate, I make a really good living, and I'm proud to be an actress who's making as much as many of my male peers at this stage."

I can't help but remember Lawrence's similar declarations in her Lenny Letter essay — ones that also implied she felt this "ickiness" when discussing the gender wage gap, as she, like Johansson, has been financially successful by anyone's standards. Lawrence wrote, “I failed as a negotiator because I gave up early. I didn’t want to keep fighting over millions of dollars that, frankly, due to two franchises, I don’t need. (I told you it wasn’t relatable, don’t hate me.)"

Like Lawrence, Johansson seems to be uncomfortable with discussing the fortune of her own income — as she makes so much compared to the majority of the population — but that doesn't mean she sees the system as faultless. "I think every woman has [been underpaid]," she said. Though it might not be directly affecting her at this stage in her career, for her to address the gap in general, illustrates a change in the way Hollywood — and more broadly, our culture — perceives the matter. And that's a good thing. A really good, really big, really important thing.

Johansson's comments might be a bit quieter compared to those of Lawrence's, Witherspoon's, or Schumer's, but they are still necessary. It doesn't seem to be about the money for Johansson, but, for her and other women in the industry, about the respect and principle of the issue. After all, the wage gap is only indicative of a larger, pervasive problem: That women and men are not always treated equally, no matter the industry.

Johansson wrapped up her thoughts on the wage gap with one final note. "Unless I'm addressing it as a larger problem, for me to talk about my own personal experience with it feels a little obnoxious. It's part of a larger conversation about feminism in general." Though I can't imagine her personal experiences with it being obnoxious, I think she's right. The conversation does need to become larger. It needs to extend beyond Hollywood. But if more actresses with platforms as large as hers continue the discourse on topics like the wage gap, then I would tell Johansson not to worry. it looks like we might be gaining some momentum after all.