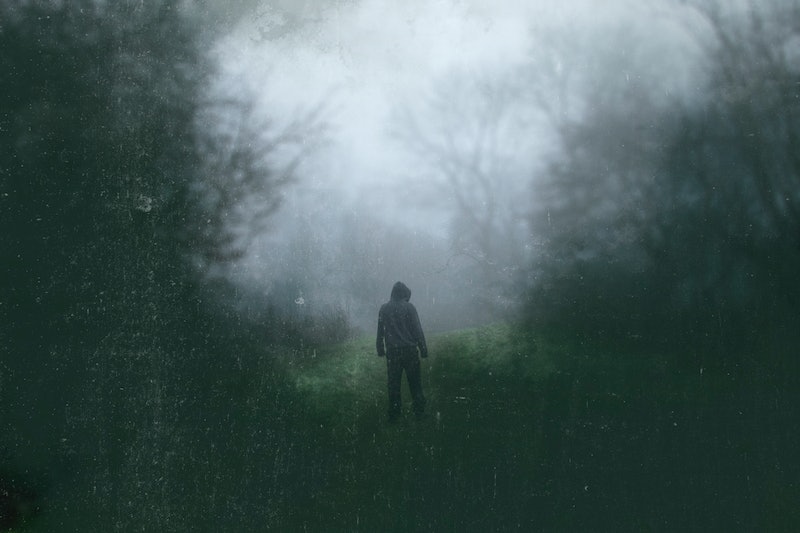 You're enjoying a party, or walking home alone, or standing in line at a coffee shop, when you notice someone eyeing you from across the room. There's nothing overtly off about them, but for some reason, they send shivers down your spine. Although it's a universal experience, it's hard to define what makes someone creepy. Is it an unkempt appearance? Clammy palms? Too much eye contact? Too little eye contact? These are all are characteristics of a creepy person, but they're not requirements — sometimes, people simply creep you out, and you may never figure out why.

Unlike fear, which is the focus of a slew of articles every time Halloween rolls around, creepiness is fairly under-researched for being such a common emotion. In part, this may be because it's so hard to pin down: Creepiness exists somewhere in the land between "threatening" and "weird." Fear causes your heart to pound and your palms to sweat, but at least you know why you're scared; creepiness, however, is subtler, and as a result, it's more difficult to know how to respond. As Nathan Heller wrote for the New Yorker in 2015, "Creepiness is the nightmare version of seduction: it can crop up in an instant, in a gesture or an ill-starred turn of phrase, and yet it takes much longer to expunge from the imagination."

Clearly, creepiness can manifest in all kinds of subtle ways, and it tends to stick around in your memory. However, there's a growing body of research indicating that it all stems from the same source: Ambiguity.

For instance, take the familiar concept of the "uncanny valley." Hypothesized by roboticist Masahiro Mori in 1970, the uncanny valley describes the unease people feel when confronted with robots that are close to, but not quite, human. As robots become more realistic, people tend to respond positively, up to a point. When they closely mimic humanity but miss the mark just slightly, research has shown that people abruptly start to distrust robots, finding them unnerving and — you can see where this is going — creepy. People attracted to the familiar humanoid features, but they're simultaneously repulsed by their unfamiliarity. However, once robots progress past this stage and more realistically mimic humanity, the creepiness factor disappears.

Similarly, this may be why so many people are weirded out by clowns. As IFL Science points out, some psychologists believe that the mask-like makeup unnerves us because we don't know what to expect. The expression may be familiar, but its fixed nature hides the clown's emotions — and many people find this ambiguity disturbing. "We take cues from the way people behave, but if there’s no change in the way they look or the way they act... that makes them very scary," Harvard Medical School psychiatrist Steven Schlozman explained to Vulture.

Although most people don't encounter clowns and robots on a daily basis, the same principle of ambiguity applies to our daily lives. According to research from Knox College, certain characteristics that subtly differ from societal norms give us the shivers: Peculiar smiles, bulging eyes, licking lips too frequently, and so on. In fact, survey respondents reported that even something as seemingly innocuous as making it hard to leave a conversation without being rude comes across as creepy. Overall, participants said that creepiness usually stems from being hard to predict; if someone doesn't follow certain societal norms, it catches our attention — and not in a good way.

"While they may not be overtly threatening, individuals who display unusual patterns of nonverbal behaviour, odd emotional characteristics or highly distinctive physical characteristics are outside of the norm, and by definition unpredictable," researchers wrote. "This may activate our ‘creepiness detector.'"

Essentially, it comes down to the number one rule of horror: Uncertainty is sometimes the scariest emotion. Oh, and before you blithely assume you're safe from being labeled weird, know this: According to the study, most people believe creeps don't recognize their own creepiness.