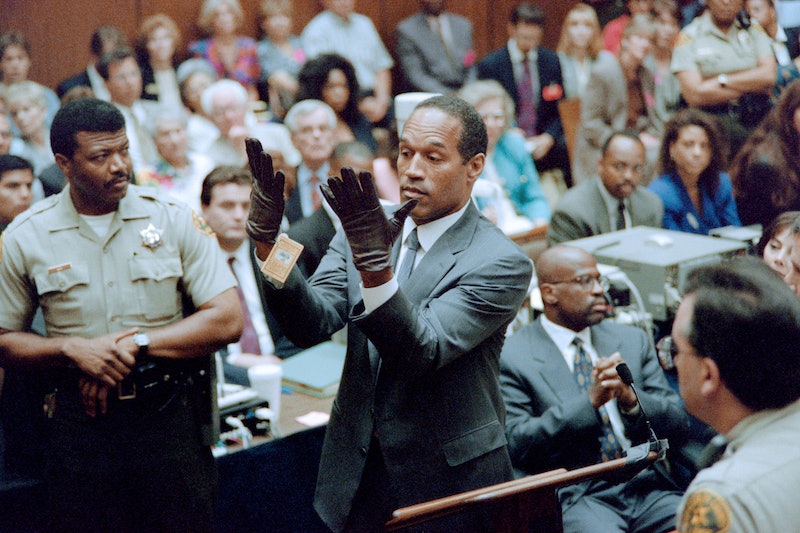 Although it has been 21 years since O.J. Simpson's murder trial, society and television show producers remain fascinated by the case that captured the public's attention for eight months in 1995. This year, the 10-part series, The People v. O.J. Simpson, aired on FX Networks and became an instant hit. The show recounted Simpson's trial from beginning to end and taught a completely new generation — many of whom were too young to remember the original trial in the '90s — exactly what went down when the former NFL star was tried for the murder of his ex-wife, Nicole Brown Simpson, and her male friend, Ron Goldman. The FX series ended on April 5, and one O.J. juror revealed the truth about what the show got wrong.

Sheila Woods (juror #1233) was a 39-year-old woman living in Inglewood, California, when she sat on the jury for Simpson's trial. Woods was one of two college graduates among the 12 jurors who voted. In an interview with Vulture, Woods spoke candidly about the FX show and how it matched with her experiences during the real thing. From behind-the-scenes drama among the jury members to the aftermath of the trial, Woods revealed the truth about The People v. O.J. Simpson and specific inaccuracies throughout the series.

Woods' interview with Vulture showed seven things that she claims the show misrepresented about the trial, specifically with the voting jury members. However, there are a number of things that Woods said were accurate; Woods said there really was a racial divide among the jurors (and the people of Los Angeles) and that the jurors were under constant watch by the guards, as if they were in prison.

Woods said in her interview that even after seeing the show, she would still make the same decision and vote "not guilty" for Simpson's verdict. Since the show ended, these are the seven things Woods said The People v. O.J. Simpson got wrong about the trial:

Woods said that the jurors were invited by local restaurants to attend private dinners and they received movie passes to go to a movie theater on Saturdays. In episode 8 of The People v. O.J. Simpson, the jurors discuss a shopping trip that the guards are taking them on, and they argue about whether to go to Target or Ross. In the episode, one of the jurors argues that black people like Ross more than Target and insists that they go there instead. However, Woods says she doesn't remember that conversation ever happening:

I do know they took us to Target though. They didn’t want to take us places where people might recognize us, but our faces were never shown on TV — although the trial was televised, they never showed us.

Testimony From The Housekeeper, Rosa Lopez

In one of the earlier episodes, O.J.'s housekeeper, Rosa Lopez, testifies on the witness stand. Prosecuting Attorney Marcia Clark question Lopez about an alleged claim that she had bought a plane ticket to return to her home in Central America. In the show, the jury members are present in the courtroom when this cross-examination happens with Lopez. However, Woods claims that that didn't happen in real life:

Even though I don’t think her testimony was all that, we never heard her testify, as they showed on the series. And she was supposed to be the housekeeper. ... There were a lot of things that we weren’t privy to that went on in the courtroom — almost as much as we were in the courtroom we were out of the courtroom. We didn’t hear a lot of testimony that maybe we should have heard.

Testimony About O.J.'s Shoes In The Car

In the same episode as Rosa Lopez's testimony, it is revealed that Detective Tom Lange took one piece of importance evidence with him overnight: O.J.'s shoes. Detective Lange put O.J.'s shoes in the trunk of his car and drove back to his home in Simi Valley — the notorious place in California where the LAPD officers involved in the beating of Rodney King were acquitted.

This actually happened in the real trial and Detective Lange was cross-examined by Johnnie Cochran, but Woods said the jury never saw Lange take the witness stand in real life. "And some of the evidence about the [Bruno Magli] shoes … More evidence came up about the shoes in the civil case than in the criminal case," Woods said in her interview with Vulture.

Jury Instructions That Detailed Reasons For An Acquittal

Judge Ito gave the jury members detailed jury instructions that detailed things about reasonable doubt and specific reasons for acquitting someone in a trial. Back in 1995, Chris Darden spoke at a press conference where he accused the jury of making a decision based on emotion, but Woods said she disagreed with that completely.

Woods also revealed that the process of receiving and following the extensive jury instructions were never shown in the finale of the TV series, saying:

We followed the jury instructions. They didn’t even show that in the finale. I mean, they were long instructions, surely they wouldn’t have shown the whole thing. But they could have done a short synopsis of Ito explaining to us that if there was any reasonable doubt, that we would have to acquit the defendant. The prosecution had to prove their case beyond reasonable doubt. And all of that was just omitted.

It is true that jury members aren't allowed to watch TV or talk about the trial with friends and family; it is also true, Woods said in her interview, that serving on the jury for so long made the jurors get a little stir crazy. "If it had gone on for very much longer I think I would have had to ask to go home," Woods said in her interview. Despite this psychological effect on her, Woods said the way the show portrays one juror going crazy and trying to escape was inaccurate:

The Casting Of Her Role

Woods said that the casting of the actress who portrays her in the show is a misrepresentation of what she actually looks like:

[The actress] who I guess is supposed to be portraying me has no resemblance whatsoever. It’s this lady that looked like she had long hair. I had braids when I first went in because I thought that I would be there for maybe two or three months. But I don’t know how they went about casting people.

A Poor Portrayal Of The Jurors

Throughout the FX series, the jury members seem to be portrayed as uneducated and not serious. They're often seen bickering with one another and disagreeing on many things. Although Woods said that there were arguments among the jury members, she disagreed with the way the show portrays the jurors in a negative light, saying:

It was a poor portrayal of the jurors. Some of them were bumbling idiots, but all of us worked and did take it seriously. Unfortunately, a lot of those [jurors] who have come out to speak just substantiate that portrayal that was shown [in the finale].