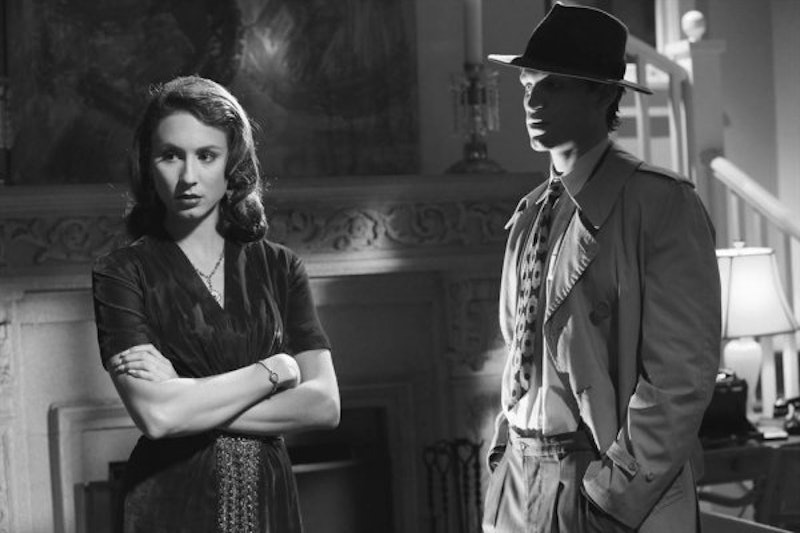 Last week, Spencer stopped sleeping, Hanna did some investigating, Aria secretly cabin'd with EzrA, and Emily attempted to deliver money to Ali. This week, Pretty Little Liars went all 1940s film noir on us, by way of Spencer's subconscious. Spencer's dreambrain tries to solve the mystery about EzrA, the mystery about "A," and whatever is going on with Ali. Spencer's dreambrain also turned Toby into the best kind of noir detective. I LOVE THIS SHOW.

Spencer, Emily, and Hanna go through Ezra’s classroom. They find ALI’S JOURNAL. Emily is like, “Hm, while this is very convenient and I’m happy we have the journal back, aren’t you worried ‘A’ planted it?” Spencer and Hanna shut this down hard. Hanna literally says, “This is all about the ‘A’-ness of things.” ENNNNGH.

That night, Spencer watches an old black-and-white movie at home. She washes down some Adderall with white wine. Oh, Spencer. A character in the movie fires a gun, AND BAM! SPENCER IS IN HER OWN BLACK-AND-WHITE MOVIE. THE MOVIE GUNSHOT/ADDERALL/WINE COMBO TELEPORTED SPENCER.

Toby appears. And he commits to the noir. He’s really the only character who goes for it with the affectation. I’m obsessed with it. He says things like: “Trust you? You’re spread so thin I can see right through you.” AHHHHH. When Spencer asks if he’s ever heard of knocking (rather than letting himself into the house unannounced), he says, “I’ve heard of it. I just don’t subscribe to the practice.” NOIR TOBY RULES.

Toby calls out Spencer for being hooked on Adderall. She says they’re nothing more than a focus aid. “Who’s kidding who?” asks Toby, noir champion.

Spencer asks Hanna to keep an eye on Ezra. The Liars are beginning to suspect that Aria and Ezra might be back together. THEY'RE NOT WRONG. (At one point during the dream, Ezra is like, "Nah, don't tell your friends about us because I know Ali's alive!" This was just after Aria says something about champagne being "the most sophisticated thing in the world." Ughhhhh.)

Later that night, Spencer saunters down the Hastings staircase in an amazing silk dress robe thing. Serving some Veronica Lake realness. Toby drops by again. Classic noir Toby move. He suggests she stops popping pills (recurring dream theme). He also tells her she has all of the pieces necessary to solve whatever it is she wants to solve.

There’s a giant portrait of Ali in the Hastings house. Where’d it come from? No one knows. “Almost looks like she could step right out of the frame and kiss ya,” Toby says. “Or laugh in your face.” Hey, so Toby wins the episode. Isn’t even close. Spencer mumbles something about Ali being alive, Toby is like, “TAKE IT EASY WITH THE PILLS,” and Spencer is like, “Nah, I'm good.”

“There’s a blonde package for you,” Mona tells Spencer over the phone. She gives her the location. “You’d better hurry up… while she’s still breathing.” Dude. Spencer’s Adderall dreams are dark.

Spencer goes to the address. It’s… EZRA’S APARTMENT. Ezra, Mona, and Hanna greet Spencer. Spencer and Ezra go back and forth. At one point, Ezra says, “Tell [Aria] about me. Tell her who you think I am. That should fix it.” Yeah, Spencer! TELL HER. “But you haven’t,” Ezra continues. “Why not? Because you’re not sure. You’re in over your head and you know it.” And then he teases her about her wild Adderall dream.

Later, Ezra tells Toby that Ali is alive and that Spencer knows how to find her. Toby is like, "HGDJXJGZJADHGHDHHXPZ."

Meanwhile, Emily and Paige are dealing with their secret, hush-hush relationship. Paige is worried about what people will do if they’re open about their love. Emily is like, “MEH. Let them be jealous.” AND THEN THEY TAKE IT TO THE BONE ZONE. YESSSS.

Back at the Hastings house, Ali appears! Ali can’t stop talking about the portrait. “That is immortality, my darling.” Ali, my god. Do you ever dial it back? Spencer goes all Spencer on Ali. Ali tells her she has all of the pieces to figure everything out (ah! Another recurring theme). And then! She’s like, “WHAT IF YOUR PILLS FELL DOWN THE DRAIN FOR NO DISCERNIBLE REASON?” And then they do. Dreams can be wackadoo.

Toby catches Spencer elbow-deep in the garbage disposal. She needs. Those. Pills. He yells, “SNAP OUT OF IT!” Ali is gone.

Toby takes Spencer to an interrogation room. He asks her about Ali. She sort of tells him stuff, sort of doesn't. Toby says she has the tools to figure out the next step. Spencer is like, “Ack, I don’t want to think. I want to sleep.” They kiss.

Spencer finds a number in Ali’s journal that’s for the Fitzgerald Art Foundation. Spencer is like, “Hey, Hanna? Please use your switchboard powers and figure out what this means.” And Hanna does just that. We watch Hanna switchboard up a storm. It’s incredible. Her switchboard sleuthing directs her and the other Liars to the dressing room of a theater.

Before they go to the dressing room, Aria tells Spencer she and Ezra are back together. Spencer is like, "Ha... About that... " and then Hanna interrupts with the dressing room info. They bolt.

Ali is in the dressing room! And she’s furious. She wants them to leave and asks if they’re trying to get her killed. Ali tells the other Liars to stop letting Spencer run the show. Spencer is like, “Oh, okay. I see what you’re doing. This is one of your famous Ali set ups!”

Ali asks Aria if Spencer’s told her about EzrA yet. Nope, not yet! Just as Spencer begins to spill the beans, BULLETS FLY. They run away and hide in a warehouse. They hear Ezra’s voice. Aria is like, “YAY! LOVE!” The other Liars are like, “Um, uh… Haha!… You’re never going to believe this one, Montgomery.” Aria is like, “Why are you being freakazoids? I’m going to Ezra. Suit yourselves.” She walks toward Ezra. Ali calls out Spencer for not telling Aria the truth.

BUT EZRA ISN’T EZRA. HE’S TOBY. Toby says he hit Ezra, there isn’t much time, and the Liars pile in Toby’s car. Aria wants to know why Toby socked Ezra. Everyone zips their lips. But then, they unzip their lips to yell at Spencer about figuring things out. They want her to figure out the next step so that they can all move on. Spencer complains that she’s tired (another recurring theme. Dreams, man). Toby tells her to not look at the book, but at the pages. Spencer says that’s the same thing. “No, it’s not,” Toby says. AND THEN THEY COLLIDE INTO ANOTHER CAR.

Spencer wakes up from the noir-mare. She has an epiphany. THE PAGES! She realizes that whoever returned the journal made changes. That it’s "a Trojan horse." HMMM. Emily knows what’s up.

Spencer compares the amended journal with the screenshots of the original journal on her phone. Hanna and Emily are like, "Oh, crap."

They go to Aria’s. They want to make sure she's okay. That she isn't with Ezra. They see her in the house… WITH EZRA. NOOOOOO. BREAK DOWN THE DAMN DOOR, LIARS. ATTACK BOARD SHORTS! IT'S MORPHIN' TIME!

More like this
What Song Does Eddie Play in 'Stranger Things'? Metallica’s “Master Of Puppets” Ignites The Season 4 Finale
By Alyssa Lapid
Florence Pugh & Zoe Kazan Have Teamed Up For A Major New Netflix Series
By Rachel Mantock
'The Summer I Turned Pretty' Book Ending Is An Emotional Rollercoaster
By K.W. Colyard
Hannah Khalique-Brown Has Her Sights Set On 'Strictly'
By Frances Stewart
Get Even More From Bustle — Sign Up For The Newsletter