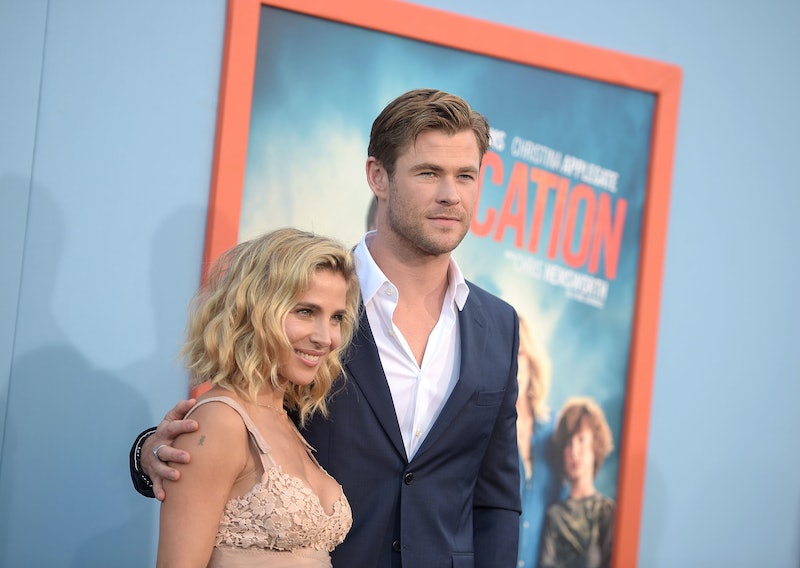 Some celebrities try to maintain the facade that they are "just like us," but wake up, sheeple, because they are certainly not. Case in point: beautiful actor and producer Elsa Pataky and her beautiful husband Chris Hemsworth, who celebrated five beautiful years of marriage back in December. And to drive home the post that these two aren't just like you or me, the way Chris Hemsworth and Elsa Pataky met is pretty specific to their careers.

Hemsworth, 32, was introduced to the 39-year old Spanish actor and producer by talent agent William Ward in early 2010. The pair got married just three months later in December. And it seems like what makes their relationship work is the impulse and spontaneity. Hemsworth, whose next role is playing a sexy receptionist in the Ghostbusters reboot, said in the December issue of Elle that there was no rom-com meet-cute. "There was no light-bulb moment," he said. "From the first time we met, we just made sense. She's fun. She's outgoing, and she has a sense of humor and a passionate attitude toward life, which is nice to try to keep up with."

They tied the knot during a vacation in Indonesia during the Christmas holiday, and Hemsworth said in an interview on Good Morning Britain (via Woman's Day Australia) that the entire wedding was poorly planned. A man after my own procrastinating heart. "There was no great plan to any of it to be honest, we were on holiday and we said 'why don't we get married too?'" he said. "There probably should have been some planning but it all worked out. Honestly, we had both our families on holiday at the same time, just randomly, and we said this is a good opportunity with everyone together so we just did it."

And as further proof that the secret to a successful marriage is not to take the wedding so seriously, back in 2013 in an interview with Details (quote via Daily Mail), Hemsworth admitted that he and Pataky had forgotten the exact date of their wedding: "There’s a bit of a dispute... So yeah, the answer about the date of my wedding: somewhere in December."

Pataky and Hemsworth have been married for five years and in that short time have had three children; their daughter India Rose was born in 2012 and their twin sons, Sasha and Tristan, in 2014. The actor told Elle that having children has taken the edge off the wild world of celebrity: "It's certainly kept my feet planted firmly on the ground — I've been able to bypass a whole lot of garbage [and] traps that I could have fallen into."

If you're intrigued by this close to perfect sounded marriage, you can lurk the crap out of Hemsworth's beautiful life; Pataky posts tons of photos of her life with Thor and their three sweet kids on her Instagram account.