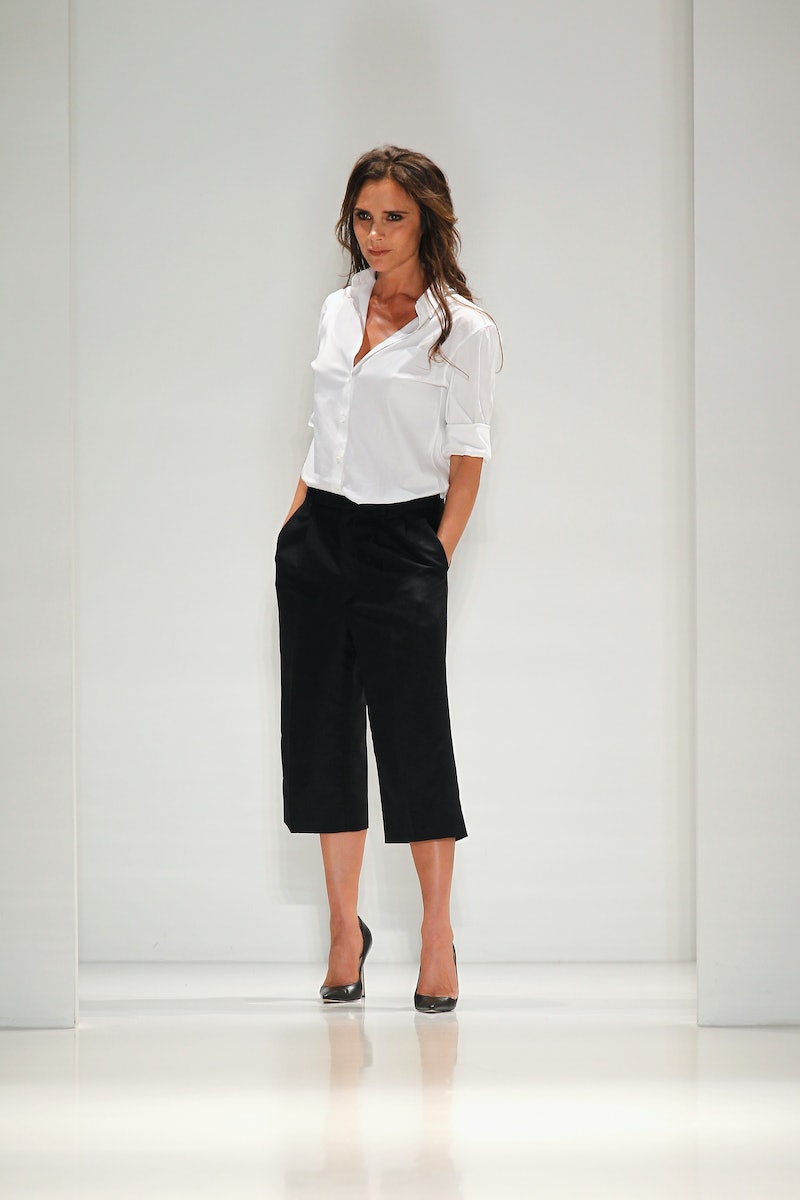 Oh, Victoria Beckham, you’ve given us so many wonderful things. First there was the too-short-lived Spice Girls, then the creation of the best-looking family on earth — what with the handsome David Beckham and the too-cute-for-words baby Harper — and finally, an amazing fashion brand whose collections continue to knock our socks off at Fashion Week after Fashion Week. (Also, there was that time a few days ago when she brought said cute family to the front row of her NYFW Fall ’14 runway show, practically making our heads explode with all of the adorableness.) Now, on top of everything else, she's telling us she wants to launch a footwear collection? We’re spoiled!

At a recent Parsons’ event in New York City, the pop star–turned-celebrity-turned-designer did in fact unveil plans for — or at least express interest in — to creating a signature shoe line to accompany her chic, polished runway creations and collections. At the Fashion Week event, Beckham told Parsons’ Dean of Fashion Simon Collins:

I definitely think shoes is probably the next category that I’ll look at going into; it's quite a competitive category but I would love to go into [it].

For the time being, Beckham has been teaming up with famed footwear designer Manolo Blahnik to create shoes for her fashion shows each season, but said she would like to try her hand at footwear design with more than just a “signature shoe.”

Beckham’s womenswear designs have becoming increasingly sophisticated and highly regarded over the five years since she launched the brand in 2009, being worn by stars like Lupita Nyong'o, Eva Longoria, Miranda Kerr, and more. Known for her clean lines, minimal detailing, and sophisticated pieces, Beckham has managed to inject a bit of British elegance into the world of American fashion.

It’s these clean lines and perfect tailoring that might set the stage for a successful menswear collection, which Beckham also expressed interest in launching. At the same Parsons event, she told Collins:

We could easily get behind a Victoria Beckham men's collection, especially if the campaigns were fronted by hot hubby David Beckham. And considering all of those half-naked H&M and Armani underwear ads he's done, we're sure he's got the chops.

More like this
Florence Pugh’s Governors Awards Naked Dress Is Straight Off The Runway
By Sophie McEvoy
Behold: The Wildest Fashion Moments of 2022
By Dominique Norman
Twitter Can’t Get Enough Of Lewis Capaldi Creating Fashion Looks For ASOS
By El Hunt
Here Are All 703 Outfits Rachel Wore On Friends
By Kat George
Get Even More From Bustle — Sign Up For The Newsletter