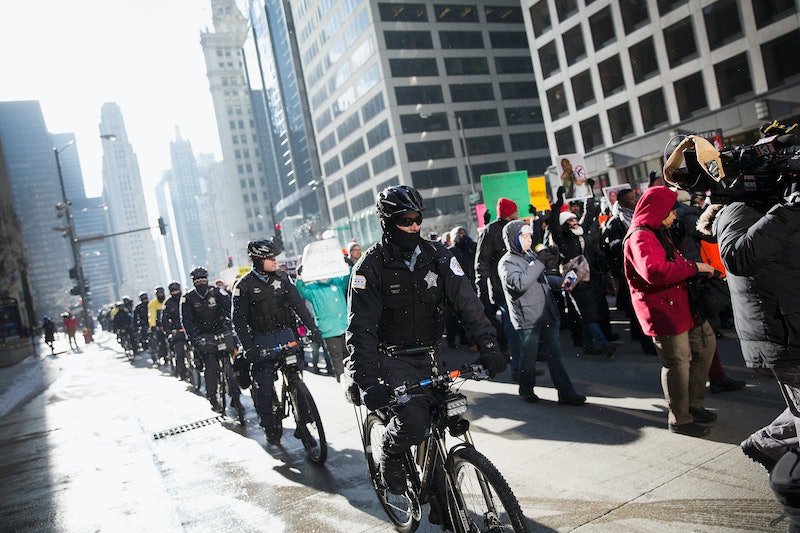 Something I've frequently noticed in my communities, at my school, in electoral politics, and in the public sphere generally, is a tendency for people to tell activists that they need to be "respectful," and that they need to engage in dialogue if they wish to be taken seriously. What alarms me about this is that this is yet another way to uphold oppressive power structures that center authority as worthy of respect. This concept is described as respectability politics, which is the idea that if we behave in "respectful" ways deemed acceptable by our predominantly white, patriarchal, heteronormative society, then maybe we deserve to survive and have our human rights respected.

Of course, it's not that simple.

I've seen people of color do this to other people of color. I've had fellow South Asian Americans do this to me. But respectability politics has been intentionally crafted within a framework that is systemically racist, sexist, and classist.

Did anybody tell those white armed protesters in Oregon to be more "respectful of authority" to get what they want? Of course not. Indeed, people were "afraid of them," according to local residents. But for some reason, when college students hold walk-outs and die-ins to advocate for divestment from companies invested in human rights violations, or when Black Lives Matter activists protest the Democratic presidential candidates, or when people take to the streets of Ferguson after Michael Brown's body is left outside for hours, they're not being respectful?

I have learned that compassion is a radical act, and in our communities, we need to hold that idea closely or we will find ourselves being forced to assimilate into structural hierarchies, to assimilate into whiteness. But even as we challenge whiteness, we still need to be reflective of the oppressions we perpetuate ourselves; as a South Asian American, it is my responsibility to address the anti-blackness and colorism still prevalent in South Asian spaces. Compassion involves challenging yourself to combat these manifestations of oppression on a daily basis.

Here's the deal: Although respectability politics would have you believe otherwise, "productive dialogue" is not going to fix injustice and oppression. Besides that, dialogue does not always have to be productive to be meaningful — as ideas of productivity are also rooted in capitalism — and dialogue is also not the only effective way of advancing social and political change. Dialogue is a tool, absolutely; but it can only accomplish so much on its own if its not accompanied by or translated into community building, direct action, and concerted efforts to educate oneself on systems of oppression because it is not a marginalized person's responsibility to consistently provide that education and emotional labor.

Being respectful and being respectable are different things, but neither will ever really protect marginalized people from the very real threat we face on a daily basis in a system that was built on our bodies and our blood. Being "respectable," by the white upper-middle class' standards, ought not be something to which we aspire, but something we reject as an attempt to police our actions and appearances.

There's something horrific about seeing a group of people who are fighting each and every day for their lives, who know that at any moment they might be stopped on the street by a white cop and the next moment be dead, and then saying, "you should be more polite, and then they won't kill you!" or "if you were just a little nicer, and were willing to engage in dialogue, then maybe people would understand why racism is wrong."

The politics of respectability have no place in our activism, and our goal is not and should not be to placate administrators and government officials who have nothing to lose by disrespecting us.

We cannot let whiteness define what is successful and what is productive for us. The social structures in place try to tell us how to dress, how to talk, and how to achieve our goals, but marginalized people can do that for ourselves. We just need to recognize that centering those are most marginalized in our movements — rather than trying to appeal to the status quo — is what actually matters.