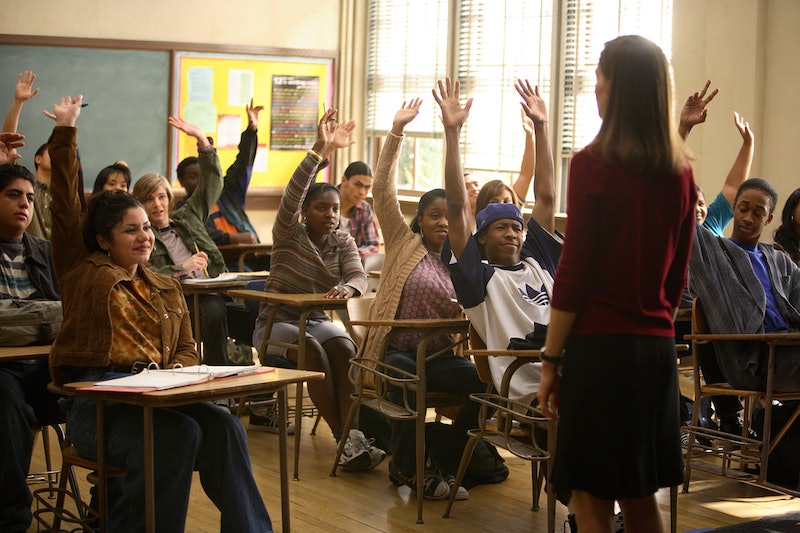 I can only remember having two non-white teachers during my time in school. From my early years at underfunded public schools comprised mostly of black and Latino students to my later years at private schools with largely white populations, my experience as a black student learning from white teachers has ranged from incredibly inspiring to incredibly damaging.

As a black student in public schools, I had a white art teacher give me a failing grade on an essay project because, as he explained to me, "graffiti isn’t art." I was kicked out of classrooms for “having an attitude,” rolling my eyes, playing with my braids, or wearing a gang-related shirt (it was FUBU). Once, I was kicked out of class for telling (and attempting to show) an incredulous math teacher that I already knew how to do the work he was condescendingly explaining... again. I had white principal who refused to sign the recommendation letter I needed to complete my application for a private high school. Let's not forget the metal detectors, police officers, and zero-tolerance treatment that make many of these public schools feel more like prisons than learning centers.

But fancy private schools aren’t off the hook, either. As one of few black students at the private schools I attended, I had white teachers show photos of apes and compare them to African women. I had a history teacher touch my braids and ask, in front of the entire class, “Is this horse hair? I hear that’s how they do that.” But I was lucky. The experiences of many other students of color in schools often includes dropouts, pushouts, arrests, and even violence at the hands of their educators.

Being a teacher is tough. Being a white teacher of students whose experiences are mostly foreign to yours is probably even harder. But I’ve had amazing white teachers, too. I’ve had white teachers who came to my birthday parties, even though I lived in “the hood.” White teachers who encouraged me to explore topics about my culture within the curriculum. White teachers who didn’t treat me like a unicorn for solving a math problem. In fact, my favorite teacher was one who, after my principal essentially sabotaged my application to private school, explained the situation to the school and managed to get them to let me test in despite the incomplete application. She was white, too.

Unfortunately, the whole U.S. education system is broken, especially for students of color. But what one teacher does in her own classroom can make a world of difference. Teachers have a responsibility to examine their own prejudices, and to learn about the experiences of (and oppressive forces working against) the students they are teaching. Because when we walk into a classroom, both as teachers and as students, we don’t magically leave our struggles and life experiences at the door.

Maybe you can’t change the whole system. Maybe rigid curricula and standardized tests have your hands tied. But, as some of my teachers showed me, reading a book can go a long way. These are some of the books that I wish my white teachers had read.

1. For White Folks Who Teach In the Hood by Christopher Emdin

Why, oh why, couldn't this book have been published ages ago? The strategies put forth in Emdin’s book are brilliant for any teacher, but its call for white teachers “in the hood” to reassess the ways that they see students versus how students see themselves is especially crucial. An educator himself, Emdin offers real solutions to help white teachers check their privilege and connect with their students.

2. Pushout: The Criminalization of Black Girls in Schools by Monique Morris

This book! So many of the things in this book resonated deeply with my own experience. Morris shines the light on a group that is often neglected in discussions of education issues. She highlights the many ways that Black girls are misunderstood, neglected, and criminalized, not just by the system as a whole, but also by teachers who fail to see past stereotypes of black women as “sassy” or “loud.” She also touches on how the experiences of black women outside of the classroom play out inside it.

P ushout: The Criminalization of Black Girls in Schools , $20, Amazon

Yes, it is crucial to look at black students as actual humans, rather than just data points or statistics. but that doesn’t mean you shouldn’t know your stats, too. Morris’ heavily researched book looks at black life by the numbers, busting up stereotypes and biases with figures which prove that certain commonly held beliefs are flat-out wrong. Additionally, the New Press actually followed this with a Latino Stats book by Idelisse Malavé and Esti Giordani.

B lack Stats: African Americans by the Numbers in the Twenty-First Century , $10, Amazon

4. Between The World and Me by Ta-Nehisi Coates

There’s a reason this book is a bestseller. It’s one of the most poignant works on black life today. Coates’ writing about the experience of growing up and raising a young Black son in today's climate articulates the feelings of a whole generation.

There’s a reason protesters at Black Lives Matter events are holding up copies of this book. The New Jim Crow reveals how mass incarceration has systematically disenfranchised, segregated, and stolen the lives of massive percentages of the black population. With the school-to-prison pipeline putting more and more black youth behind bars, it’s a crucial read for any educator.

6. The Mis-Education of the Negro by Dr. Carter G. Woodson

The Mis-Education of the Negro was published in 1933. Sadly, much of what Woodson describes is still relevant today. Woodson points to how a Eurocentric education system, which teaches black students to think of themselves as inferior, invisible, and detestable, hinders them throughout the rest of their lives. You don’t even have to buy the book; you can read it online over at History is a Weapon.

T he Mis-Education of the Negro , $8, Amazon

The eight stories in Drinking Coffee Elsewhere tell of people looking for truth, trying to fit in, having big dreams, or just trying to make it. Yes, most of these characters are black. Yet, despite the absurd notion that black characters are unrelatable, these stories are profoundly human. Is it sad that we need reminders that black people are people? Yep. Do we still need it? Yep. It’s also just a beautiful collection.

8. The Light of the World by Elizabeth Alexander

While the story Alexander tells here is one of loss, it is also one of love and joy and family. Black people don't see enough of stories and images of black love, joy, and family, so I know white people aren't seeing enough of these stories, either.

9. The Sisters Are Alright by Tamara Winfrey-Harris

All too often, the gaze with which white people look upon black lives is one of pity. With all the negative portrayals, hard realities, and racism, it’s no wonder. But black people are not community service projects, and pathologizing black students or looking at them like wounded animals can be damaging, too. The Sisters Are Alright counters the stereotyped narratives of black women, celebrating them instead of disparaging, pitying, or insulting them.

10. The Teacher Wars: A History of America's Most Embattled Profession by Dana Goldstein

If you want to change your future, you've got to know your history. Goldstein's look at the history of teaching and schools in the United States takes on the hard topics, including the issue of race in the classroom and the necessity of teachers of colors in the classroom.