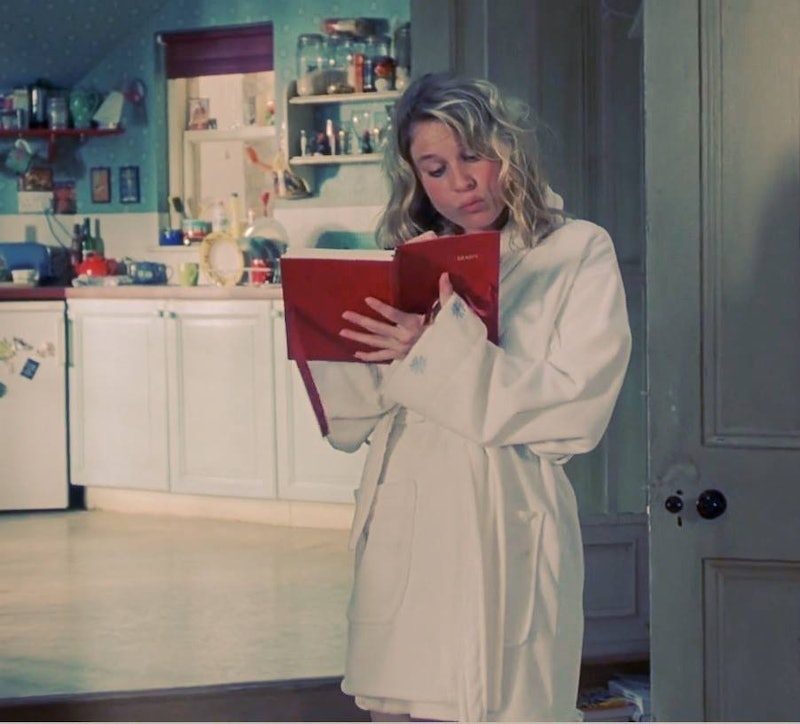 Bridget Jones is no doubt one of the most iconic British "singleton" characters of the 2000s. She was first introduced in Helen Fielding's novel Bridget Jones' Diary and then movie audiences met her in the 2001 movie of the same name. But the movie and book actually has some roots in classic literature, and there are lots of Pride & Prejudice callbacks in Bridget Jones' Diaryhttp: you may have missed. That's right — Fielding was definitely a fan of the romantic Jane Austen novel most of us read in junior high or high school, causing us to have sweet dreams of a real life Mr. Darcy. Whether or not he actually exists is up for debate.

But in Bridget Jones' case, Fielding gave her sassy Brit character a Darcy all her own — Mark Darcy. Released 15 years ago, Bridget Jones' Diary followed the title character on her journeys as a single woman in dating, work mishaps, and parental care. She's basically a modern day Elizabeth Benet from Pride and Prejudice, Austen's classic novel about the Benet family's successes and mishaps while trying to marry off its daughters to wealthy men. That kind of makes Bridget Jones' Diary an unofficial adaptation of the Austen book.

And Bridget Jones' Diary has plenty of references to Pride and Prejudice. Check them out below.

Let's start with the most obvious one. Mark's last name is a reference to Fitzwilliam Darcy, Elizabeth Benet's future husband.

2. Bridget Has To Go To Her Parents' Parties (Ugh)

In Pride and Prejudice, the Benet parents make Elizabeth and her sisters go on the hunt for husbands at good ol' fashioned balls. Bridget's parents make her go to their parties to find a man as well.

In Pride and Prejudice, Mr. Darcy insults Elizabeth after their first encounter. "Well, she is tolerable, but not handsome enough to tempt me," he said. As for Bridget Jones, Mark describes Bridget to his mother as a "verbally incontinent spinster who smokes like a chimney, drinks like a fish." Yikes.

4. Bridget Feels The Pressure To Get Married

Just like Elizabeth, Bridget's parents are trying to get their 32-year-old daughter to finally tie the knot with someone. Anyone.

In Pride and Prejudice, youngest daughter Lydia runs off with a questionable suitor, just like Bridget's mum does.

Charming. Handsome. Pathological liar. All three can describe both George Wickham in Pride and Prejudice and Daniel Cleaver in Bridget Jones' Diary.

8. Daniel Lies About His History With Darcy (Just Like Daniel & Wickham)

Part of the reason Daniel and Wickham are so despicable is because they totally lie to Elizabeth and Bridget. For shame.

9. "It is a truth universally acknowledged..."

These are the first words of Pride and Prejudice's first line and also begins a line in Bridget Jones' Diary.