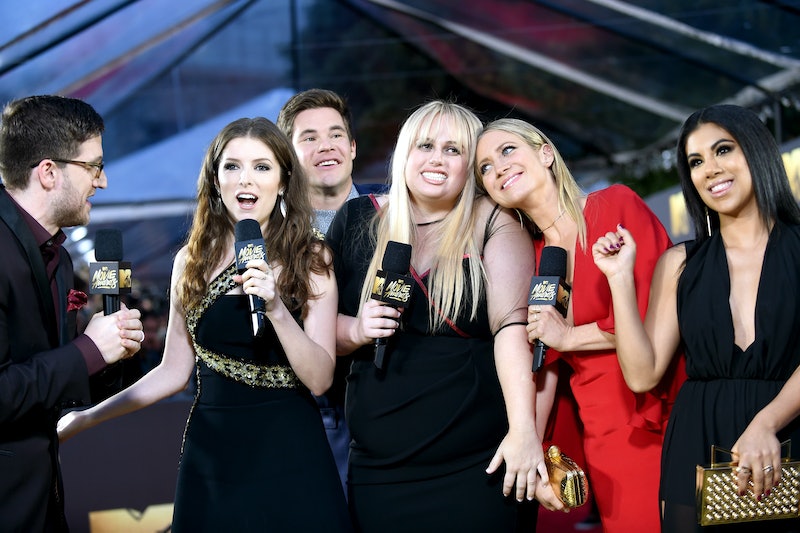 Thanks to that crazy makeout session in Pitch Perfect 2, Rebel Wilson and Adam Devine won Best Kiss at the MTV Movie Awards. As fan favorites Fat Amy and Bumper Allen, respectively, Wilson and Devine took their friends with benefits relationship to the next level in the musical sequel. In keeping with MTV Movie Awards tradition, Wilson and Devine recreated their Pitch Perfect kiss on stage when they accepted their Golden Popcorn at the show, which was pre-taped on Saturday night. Pat Benatar's "We Belong" was even playing in the background when they first approached the stage, setting the same scene as that epic movie moment. "It's quite incredible we won this award because in real life, we have absolutely no sexual chemistry," Wilson joked once she took the microphone. "None, zero, zilch," Devine added. Despite further protests to the contrary, the chemistry was certainly there when the stars channeled Rachel McAdams and Ryan Gosling — who set the Best Kiss bar high when they recreated their kiss from The Notebook at the 2005 MTV Movie Awards — and had a steamy on-stage makeout.

Alas, there are some things that are simply undeniable, and one of those things is the intense chemistry between Wilson and Devine, who went all out by making out on stage. Sometimes it can be difficult for winners of Best Kiss to kiss on stage when accepting the award. Kristen Stewart and Robert Pattinson famously refused to kiss when they took home the golden popcorn. Other celebrities, however, like McAdams and Gosling, aren't afraid to just go for it. When MacAdams and Gosling won the award in 2005 they really committed, with McAdams running into Gosling's arms for a kiss so passionate, we still haven't forgotten about it. Lucky for us, Pitch Perfect 2's Wilson and Devine decided to go the Notebook route, giving McAdams and Gosling a run for their money. You can check out a tease of the moment below.

More like this
The Sean Bean Intimacy Coordinator Controversy, Explained
By Sam Ramsden
At 28, Lesley Manville Was Acting, Picketing, & Singing Kate Bush Songs
By Olivia-Anne Cleary
What's New On Netflix: A Third '365 Days' Movie & Lili Reinhart’s New Film
By Arya Roshanian
The First Trailer For Zac Efron’s 'The Greatest Beer Run Ever' Is Action-Packed
By Charlotte Moore and Sam Ramsden
Get Even More From Bustle — Sign Up For The Newsletter