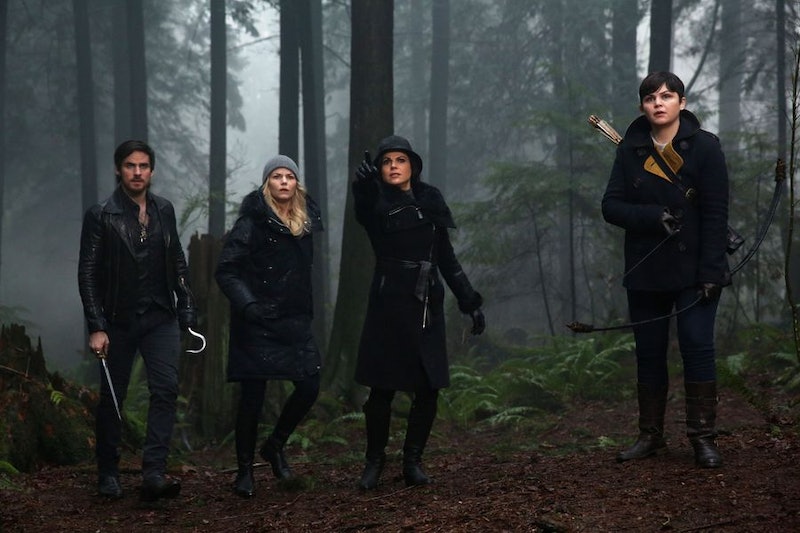 First of all, let me just start off by saying how happy I am that Ruby has returned to Once Upon a Time . (Please Red, don't ever leave us again!) However, I can't lie in saying that her surprise cameo doesn't come with some pretty grim questions, especially considering that she's popped in the Underworld aka the place where deceased souls go to hang out. Does her presence there mean that Ruby is dead on OUAT or is she — much like Regina, Snow, and the gang — an exception to this usual visiting rule? As of now, that answer remains a bit unclear, though, I'd very much like to believe the latter explanation. Not just because I love seeing her character and would hate for her to end up dead. (We only just got her back!) But also because Emma's foreshadowing dream makes me feel like there's more to her visit than meets the eye.

Earlier in the episode, Emma dreamt that she, Snow, and Hook would encounter a fierce monster during a trip to the Underworld graveyard, which ended in the beast attacking Snow and killing her. But as we should know by now on this show, nothing is ever exactly as it seems. Because when they finally decided to face the creature head-on, it turned out that Emma's vision wasn't warning her against finding this unknown being. It was helping her to find it. And that "it" just so happened to be Ruby in her wolf form.

However, that still doesn't explain what exactly Ruby is doing all the way down in the Underworld. Was she there by choice? Is she the key to taking Hades down for good? Or is something terrible happening in the real Storybrooke that's led her to a deadly fate? I'm sure all will be revealed during next Sunday's episode. But in the meantime, let's all just obsess over the promo (aptly titled "Ruby Slippers"), and rejoice in the upcoming Ruby and Mulan reunion that awaits us: