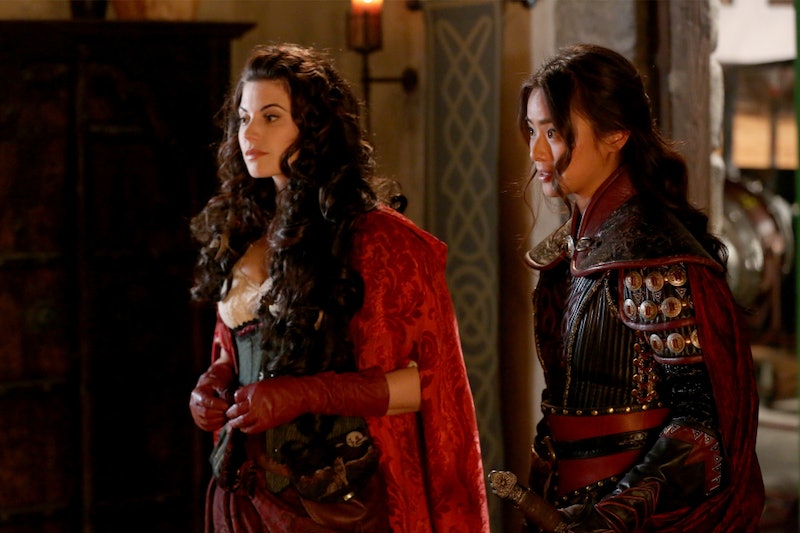 I was so happy to see Ruby back on Once Upon A Time. The show has a knack for introducing a whole town full of people, and then slowly letting them disappear into the background because they're not part of the Charming Chosen, which is a term I just coined that I'm going to keep using. Season 1 was really good about focusing on characters away from the Charming Chosen, as we all tried to figure out who everyone was in regards to their Enchanted Forest counterpart. Since Season 1, that's fallen by the wayside, and that means many supporting characters have, too. One of those being Ruby, who finally returned to the show in Season 5 with a backstory to explain her disappearance, even though she disappeared just as quickly again. How about OUAT not go another two seasons without Ruby, so when can we expect to return to Storybrooke?

As she explained to Mulan (who also made her grand return to the show), Ruby voluntarily left Storybrooke. During Neal's naming party (Baby Neal, not Emma's Neal. Sigh), she slipped away because she didn't feel like she "belonged." Snow realized this, sniffed out that she was up to something, and Ruby admitted that she was looking to get back and find her wolf pack. With a magic bean she harvested with Tiny — speaking of Tiny, someone go check on him — she found herself back in the Enchanted Forest.

OK, so now what? Last we saw her in Season 5, Ruby and Mulan were off for parts unknown. Ruby was still trying to find her pack, wherever they could be, and invited Mulan along, too. When the news first broke that Meghan Ory was returning to the show, TVLine noted that she would be appearing in multiple episodes this season. So far, she's only been in one. So, where might we see her next?

How and Why Ruby could end up in the Underworld with Hercules and Meg is anyone's guess. None of us questioned how Ruby, Mulan, and Merida all became BFFS, so anything can happen.

During The 100th Episode Of OUAT

OUAT will celebrate it's 100th episode this spring, and so far they've lined up a bunch of familiar faces to return. Peter Pan will be back, so will Cora, and even Sydney! It's going to be one big (probably not happy) reunion, and while it's not clear whether some of these characters will be appearing in flashbacks or what, they'll be back nonetheless. Perfect time to squeeze Ruby in, too.

There are no Disney wolves — unless we're talking about the ones who chase Belle in Beauty and the Beast or raise Mowgli in The Jungle Book. However, this doesn't mean OUAT can't create some sort of other backstory for Ruby and her MIA pack. We've already gotten a lot of her story, but that can't be all of it, can it?

When Mulan Finally Gets Her Own Storyline

Question: Why have we not been to China yet with Mulan? It's about time we made the trek over there to see Mulan's pre-Enchanted Forest life, and since she and Ruby are already together, she might as well come along for the ride, too. The more the merrier.

Granny Begins To Question Her Whereabouts

Ah, here's another OUAT nagging thing: Did Granny simply not notice that Ruby was gone? Mary Margaret knew she went back to the Enchanted Forest, and did she tell anyone else? I'm going to go with yes, because that sounds like something OUAT would do (When David mentions that oh yeah, he's known she was back there all along!).

But, poor Granny is all alone, running that diner by herself. Time to bring Ruby back to help out with that, like the good old days!