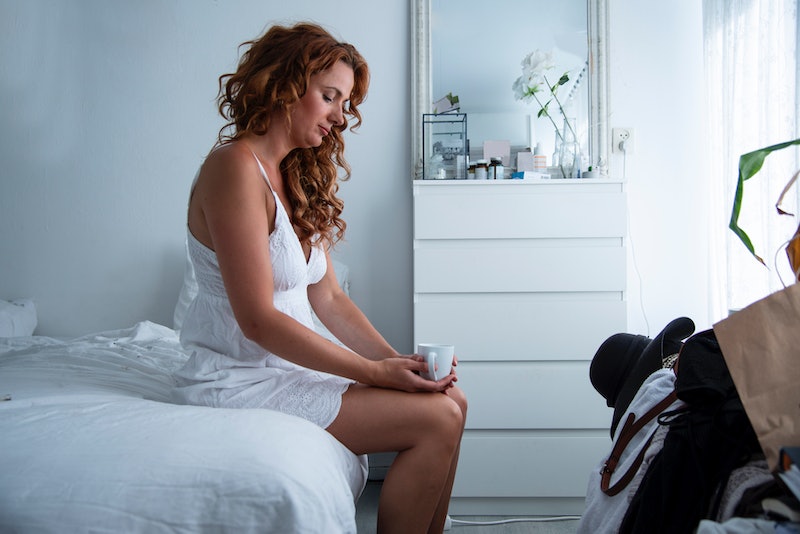 Depression, it's crucial to realize, isn't just about lying in bed feeling devastatingly awful. That, to be fair, is a big part of it; but along with emotional states, depression also often involves particular styles and patterns of thought that create challenging mental conditions, like guilt, self-condemnation, self-castigation, and illusions of failure or worthlessness. If you have depression, your head is sometimes telling you things that are completely unfounded in reality: you shouldn't bother showering, that one incident means you'll never be good at anything, nobody really likes you, and you'll never approach happiness again. As you can imagine, this is about as fun to experience as being shut in a small barrel with forty cobras.

One of the basic tenets of a very popular therapeutic technique for depression, cognitive behavioral therapy, is challenging the negative thought patterns of depressives and those with anxiety disorders, hoping to "break" some of the underlying beliefs and move into a more rational mode. It's effectively fighting the "self-critical voice" that can seem so natural to many depressives. So there is hope to get the horrible thoughts out of your head, but it takes significant work; you can't get surgery on your thought procedures, unfortunately.

Here are seven completely bonkers things that depressives may occasionally think. If you look at them and go "well, that's crazy," you are correct. Doesn't mean we don't absolutely believe them at the time, though.

1. This Person Is My Friend Because They Pity Me

Being acutely blind to one's own positive qualities is an interesting aspect of depressive thought. And, in depressive episodes, it can lead to frank incomprehension as to why people are sticking around or trying to be nice. What do they get out of it? They're just being kind or doing it out of the goodness of their heart, surely; I must extricate myself so that I don't bring them down or cause them difficulties.

Interestingly, the science on this points in another direction entirely: The Atlantic , in an overview of depression studies in friendship groups, pointed out that all the evidence shows good friendships actually lower people's risk of depression, and that good moods spread much more among friends than depressive thinking.

2. Happiness Is Impossible For Me

This feels vaguely, spookily final, but I cannot emphasize enough how impossible and invisible happiness seems to those deep in a depressive episode. It doesn't only feel far away; it is virtually impossible to imagine, even though there is likely empirical evidence that we were at one point happy, carefree, and having a good time. (An opinion piece in The Guardian in 2015 made the very pertinent point that "one of the most popular, enduring, and irritating myths about depression is that it means depressed people are sad all the time." It happens; we just lose touch with it.) But happiness seems, in the very low points of a depressive period, extremely unlikely to ever recur again. This is one of the main reasons that it's useless to tell a depressive to "just cheer up;" we would love to, but we can't really conceive of how.

3. This Poorly-Baked Cake Means I Am A Failure

This is a particular form of irrational thinking known as "catastrophizing;" it comes up a lot in depressive thought patterns. Psychology Today defines it as "cognitive distortion," in which a depressive person imagines a negative outcome and then projects the consequence as abysmal in every way. Basically, one small failure or misstep (which, for a normal and balanced mind, could be laughed off as something that just happens) becomes a bigger indicator, proof of the depressive person's inherent worthlessness and inability at, well, anything.

I have been known to fail at making meatballs for dinner in a depressive episode and give up on doing anything for the remainder of the night, feeling assured that I will be unable to do any of it.

4. There's No Point Eating Or Getting Out Of Bed

The basics of operating as a person in the world are known, in the mental health community, as self-care. And I mean really basic: getting out of bed, showering, cleaning your environment, going to work, eating food. Self-care is often mentioned as one of the most vital parts in a depressive's arsenal against really bad points; the sense of oblivion and hopelessness that pervades during episodes can make even the most untaxing of duties to care for oneself seem like a waste of energy. We think we don't deserve to be good to ourselves, and it's easier not to be.

5. If You Don't Text Back You Must Think I'm Awful

Remember catastrophizing? That can also apply to social interaction. Big time. Small incidents of apparent "slighting" or negativity can transform, in a depressive's mind, into large-scale indicators of big, bad problems, even though they can be easily explained in a rational mind. Depressed people aren't doing this for attention or to get reassurance; the beliefs that manifest in situations like this are utterly genuine, even if they're also completely unfounded.

6. I Am Just A Burden To Everyone Around Me

Depression can contain a significant component of guilt, a cycle that only embeds negative feelings further. I feel terrible; I'm awful for feeling so terrible and must make life so hard for those around me; I feel even worse; and so on ad infinitum. Guilt about feeling depressed is one of those exacerbating factors that can require serious psychological intervention, because it turns out that depressive brains actually respond very acutely to guilt; a 2012 study found that heavy guilt was much easier to access in those with depression.

7. At Least I See Things More Clearly Than Happy People

There is, for a particular kind of depressive, a sense that depression is the "real" view of the world: that it's all hopeless and without any point, things are intrinsically awful, and nobody actually likes us. The hold of serious depression on perspective is so powerful that it can make things seem incredibly clear, like a bizarre philosophical breakthrough. It can almost make you feel superior to people who are blindly happy; they don't have the same acutely attuned viewpoint on the true suffering and worthlessness of the world, and us in particular. This is so supremely irrational it's basically intoxicating, and no, feeling like this does not make you feel any better.