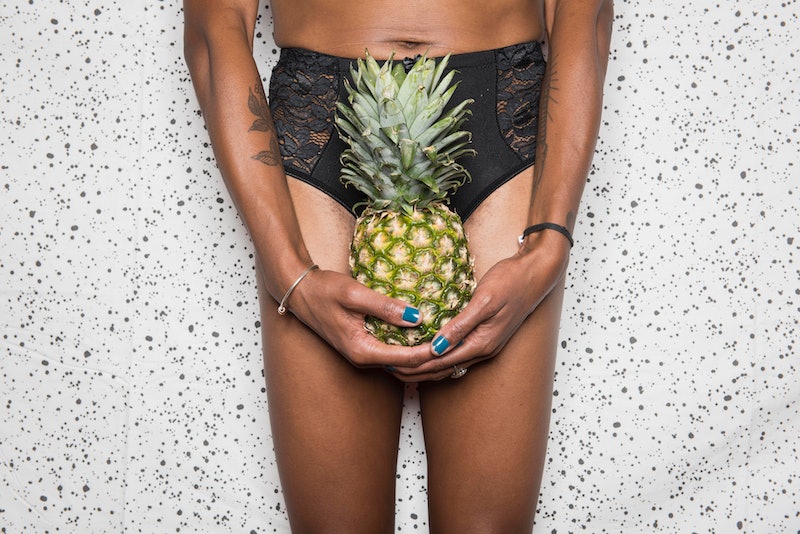 So, I have some news: one quirk of having a body with a uterus is that your uterus can slip down into your vagina, or, on very rare occasions, out of your body altogether. It's called uterine prolapse, and it's not common... but it does happen. According to the Association for Pelvic Organ Prolapse Support, 3.3. million American women are dealing with the prolapse of some organ in their pelvic region. But as scary as it sounds, prolapse isn't hopeless; once diagnosed, people dealing with prolapse have an array of options to help them get things back into place. Got over being freaked out? Good. Ready to learn about the signs of the condition so that you can know what is up if it ever happens to you? Let's get into it.

Uterine prolapse is most common in older people whose estrogen levels are lowering due to menopause, as well as in people who've had more that one child by vaginal delivery (probably the biggest strain to the pelvic muscles known to man). But the risk factors extend to all people with uteruses, and prolapse has also been known to happen to people who've frequently strained their pelvic muscles over the years (this can include people suffering from chronic constipation), as well as those suffering from long-term chronic coughs.

"Far and away the most common cause [of uterine prolapse] is childbirth," OB/GYN Dr. Kate Killoran, Medical Advisor at Your Doctors Online, tells Bustle. Age, connective tissue disorders, being menopausal, and being chronically constipated can also increase your risk. Basically, it's all about muscle and ligament weakening; the uterus needs to be held in place, and if the structures that do that are no longer strong enough, it may slip.

The most important thing to know about it, though, is that often people with milder forms of uterine prolapse don't know that they have it at all, and even more serious versions may not be obvious to anybody who doesn't have easy access to an ultrasound or a gynecological exam. It can even be left untreated if it's not causing serious problems.

So the six signs below aren't definitive symptoms for every single case; if you have them, uterine prolapse may be a possible but know that you can also experience uterine prolapse without noticing any of these symptoms at all. Talk to your doctor about your options if you think you might have a uterine prolapse.

Uterine prolapse doesn't happen uniformly in all people; it can take several forms, from the uterus partially emerging into the vagina, to the uterus fully dropping into the vagina. Sometimes, the uterus is fully expelled out into the world. How do we categorize the severity of a prolapse? Prolapses are measured in degrees, as Gynecologic Specialists explains:

One of the most common signs of uterine prolapse, Dr. Killoran tells Bustle, is problems urinating. "Incontinence, urinary hesitancy, or incomplete bladder emptying which can lead to recurrent UTIs" may all be signs of a prolapse. Uterine prolapse is part of a general spectrum of problems called "pelvic organ prolapse," where any of the pelvic organs (uterus, bowel and bladder) protrude into the vagina. A purely uterine collapse may still cause urinary problems, like slow peeing or a feeling of pressure on the bladder.

But the fact is that when one pelvic organ prolapses, it increases the likelihood that others follow, because it denotes weakness in the group of muscles holding things together in the pelvic area. And if you have both a uterine and a bladder prolapse (called a cystocele), you're likely to experience problems with urination and a big up-tick in the incidence of urinary tract infections.

3. A Pulling Sensation In The Pelvis

This is fairly self-explanatory; the uterus is "falling" away from its typical location and creating pressure, which means you'll probably feel quite uncomfortable in the pelvic region. People, especially those dealing with higher-degree prolapses, report feelings like a weird weightiness in their pelvis or a sensation of "pulling." This could appear without the ball-sitting sensation, but the two may be connected. Either way, it means that something isn't where it should be.

This one's associated with another pelvic organ prolapsing at the same time as the uterus. If you guessed bowel, ten points for you! Bowel prolapse into the vagina is called either rectocoele or enterocoele, depending on the type. It means that a portion of either the rectum or the bowel is protruding through the vaginal wall. Once again, we can blame weakened muscles and ligaments in the pelvic area for the trouble. Unsurprisingly, this may lead to some severe difficulties with bowel movements, whether it's constipation or the need to press on the vagina to actually get anything to move.

As you may have guessed, organs falling out of their correct place do not mix well with penetrative sex. Because of how the female reproductive system is structured, uterine prolapse involves the cervix as well; both uterus and cervix "fall" into the vagina, depending on the degree. Sex with a higher-degree prolapsed uterus will be painful; Dr. Killoran says that "sexual dysfunction" with a uterine prolapse is common.

6. Feeling Or Seeing That Your Cervix Is Protruding From Your Vagina

This is the true sign of a fourth-degree prolapsed uterus: the cervix actually protrudes from the vaginal opening, pushed down by the weight of the falling uterus. It's not a particularly fun experience, no matter what; and it can also be accompanied by discharge, blood or pain. This qualifies as a medical emergency, and people who suspect this is happening should go to the emergency room. But even if you just feel something peculiar inside your vagina alongside peculiar sensations in your pelvic area, you should still get yourself checked out as soon as possible.

Prolapses can actually occur without symptoms of any kind. "Many women with prolapse are asymptomatic," says Dr. Killoran. And just because you have a uterine prolapse doesn't mean you have to undergo any extreme surgeries; Dr. Killoran tells Bustle that some people don't need any treatment at all, while others take vaginal estrogen and pessaries and do Kegels. "I think the most important things to consider when it comes to prolapse is how much it bothers you," she says.

The important thing to remember is that your uterus won't suddenly "fall out" of your body onto the ground while you're running errands or anything like that. It's also important to remember medical treatments can help most people dealing with prolapses feel much, much better. Prolapses are just a health problem that we need to destigmatize so that people don't feel embarrassed, and start seeking help as soon as they feel like something is wrong.

This article was originally published on April 14, 2016