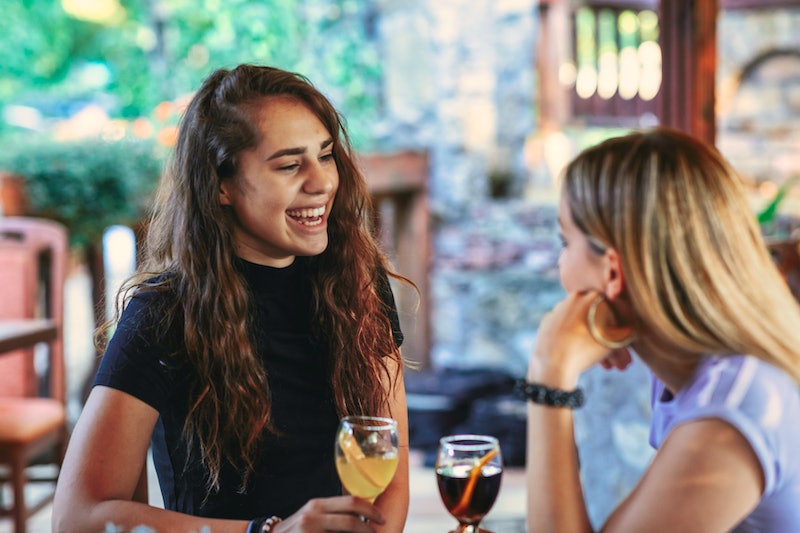 Can your friends actually be harming your health? A lot of the science on friendships and health focuses on how good friends produce happy, mentally well-adjusted, hale and hearty people; an entire issue of the journal Health Psychology in 2014 was devoted to the evidence that a healthy social network helps your heart, your immune system, and your response to stress, amongst other things. But other evidence is increasingly suggesting that bad friends, or even well-intentioned ones with bad habits, aren't a universal boon; in reality, they may actually be causing your mind and body severe stress or leading you into problematic patterns. No, Sharon, I can't come out, you're harming my pulmonary function.

The harm caused by friends can be divided up into certain categories: One is the damage caused by bad friends, the needy, guilt-tripping, aggressive, or insulting ones; another is the influence of friends who smoke or eat poorly; a third are the friends who may interfere, even unintentionally, with you getting medical help or taking medication properly. Basically, friendship isn't a panacea, and the type and quality of a friendship can do a lot more to your life than give you excellent anecdotes.

So here are six ways in which friendship could actually be causing difficulties for your health, beyond just that episode where you skinned your knees trying skateboarding for the first time with your besties.

1. Low-Quality Friendships At 30 Harm Your Wellbeing Later In Life

A study released by the University of Rochester in 2015 revealed something many of us have sensed instinctively as we've moved from college to the world of work and more serious relationships; while what matters in your early twenties might be the quantity of friendships, by your thirties, the pertinent factor becomes the quality. And both of those things can have serious impacts on your mental health later in life.

The subjects were studied over the course of 30 years, from their twenties to their fifties. And it turns out that health and mental stability at the age of 50 (the researchers measured "social integration, friendship quality, loneliness, depression, and psychological well-being" to determine stability) were much better if post-college friendships were super-solid, or met "emotional closeness goals," in the words of the study.

In other words, if you keeping making friends like you did at college — by the dozens, with relatively little serious bonding — it could significantly hurt your mental wellbeing later in life.

2. Toxic Friendships Can Cause Psychological Scars

The notion of a "harmful" friend may seem relatively foreign when we're so invested in the idea of friendship and social connection as healthy, but it turns out that negative friendships can have very bad effects on psychological well-being. In an overview of the psychological impacts of bad friendship in the New York Times, experts identified several types of poor behavior that could cause damage: betrayal, peer pressure to behave badly, insults or passive aggression, promise-breaking, contempt, dependency, meddling, and competition feature among them.

There's an excellent definition of toxic friendships over at WebMD: "unsupportive, draining, unrewarding, stifling, unsatisfying, and often unequal." And it's not just about psychological damage, either; Psychology Today points out that negative relationships of all kinds, including friendships, tend to lower long-term health outcomes, like cardiovascular health. It seems that our bodies react poorly to the year-long, low-level stress of a toxic friendship.

This is an interesting one: we're increasingly learning that our social networks have a huge influence on our behavior and health outcomes, and that may not be for the best. If you have friends constantly posting on Instagram about their workouts, you may be more likely to hit the gym yourself; but this kind of peer pressure also works the other way. There's evidence to suggest that obesity is more likely if the person has an obese friend or family member, and that exercise habits tend to be pretty heavily socially motivated too.

A study from 2007 found that networks of friends and associates may play a role in the development of obesity, and another in 2011 refined that further by asking 101 Arizona women and 812 members of their "social networks" (friends, spouses, coworkers and family members) about attitudes towards body size. The 2011 study clarified that up to 20 percent of our attitudes towards our bodies and obesity may be determined by the people we hang around with. And in 2015, researchers found people were far more likely to exercise if they had a "buddy" they knew than if they just saw adverts or motivational images. It seems that group behavior from other members of your squad may influence whether you head to the couch or the treadmill.

4. Bad Friends Are Bad For Your Heart

It looks like, as you enter mid-life and then become elderly, bad social interactions (i.e. awful friends, along with misbehaving children or contemptuous spouses) can have a direct impact on your heart health; and the impact is not a positive one. One study from 2014 looked at the link between negative social interactions, from chilliness to outright fights, and blood pressure in middle age, and found that women in particular were more likely to have high blood pressure after one.

And it doesn't end there. Another 2014 study looked at "social integration" (i.e. how many good, solid relationships people had) in old age and how it related to heart function; and it looks like flimsy, negative or absent relationships, including friendships, are a recipe for pulmonary weakness. Basically, bad friends make your heart hurt, in more ways than one.

It looks like, as you enter mid-life and then become elderly, bad social interactions (i.e. awful friends, along with misbehaving children or contemptuous spouses) can have a direct impact on your heart health; and the impact is not a positive one. One study from 2014 looked at the link between negative social interactions, from chilliness to outright fights, and blood pressure in middle age, and found that women in particular were more likely to have high blood pressure after one.

And it doesn't end there. Another 2014 study looked at "social integration" (i.e. how many good, solid relationships people had) in old age and how it related to heart function; and it looks like flimsy, negative or absent relationships, including friendships, are a recipe for pulmonary weakness. Basically, bad friends make your heart hurt, in more ways than one.

5. If Your Friends Smoke, You're Likely To Smoke Too

Anybody who's ever tried to be part of the "cool" group by passing around a cigarette will be familiar with this phenomenon: it seems that if your friends smoke, the risk that you smoke too is considerably higher. A 2013 study of teens in particular showed that friendship with other smokers seemed to be a pretty good indicator that a teen would start to smoke themselves.

But it's not all bad news; it seems the health influence factor in friendships may also help people to quit smoking. If a close friend quits smoking, a 2008 study found, you're 36 percent less likely to keep smoking yourself. And a scientist who looked at social networking sites between 2009 and 2010 found that they actually help people who are trying to quit smoking, because they give a sense of community and common purpose. So if you want a friend to quit smoking, quit yourself.

6. They Might Discourage You From Seeking Help And Taking Medication Properly

It's not just bad friends who have negative health impacts; it can also be well-meaning ones who don't encourage the correct behavior. A famous medical study from 1983 showed that the people you see after a medical incident, whether it's a fall, a cut, or an unexplained symptom, can directly influence whether you choose to go to the doctor or the ER, or stay home with a bandage and painkillers. This can be a good thing or not so great, if you tend to associate with people who discourage you from medical attention for their own personal reasons.

It's what's called the social network theory of influence on help-seeking behavior. Basically, according to Barbara Arrighi and David Maume in their investigation of child poverty, "according to a social network theory, the interactions individuals have with members of their social network form the principal mechanism through which they recognize health problems, contact health facilities, and comply with medical advice." (We'll get to that last bit in a minute.) These days, that also includes Facebook, Twitter, and other online social media; a full 53 percent of all teens on social media said they looked for medical or mental health advice to their online friends.

And once you've got your medication, how likely are you to take it? It looks as if, according to research, supportive relationships are the key to what's called "adherence" (or doing what your doctor told you). Which is great if you have friends and family who encourage you to do the right thing; but if they don't, you may be more likely to forget to take your pills, keep to your diet, or whatever regime you've been put on. Bad friends: not great for your health in basically any way.

More like this
The Top Mistakes Scorpios Make In Relationships (& How To Avoid Them)
By Nina Kahn
Young People Are Still Experiencing Period Poverty In UK Schools
By Sophie McEvoy
How To Do The Intimacy-Boosting Lotus Sex Position
By Laken Howard and Lexi Inks
What Is The Forest Personality Test? The TikTok Trend, Explained
By Georgina Lawton
Get Even More From Bustle — Sign Up For The Newsletter