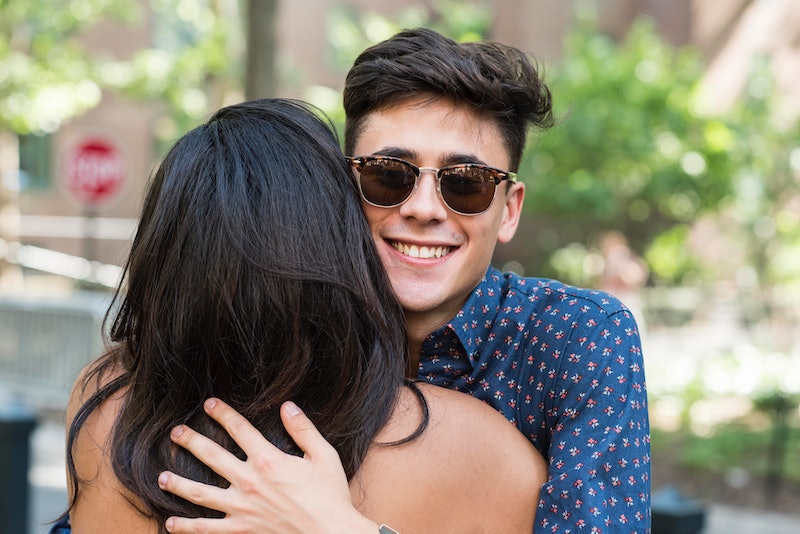 In our contemporary culture, hugs are seen as pretty commonplace. While not necessarily the first thing you do when you meet someone, it's not uncommon to hug a friend, coworker, distant family member, or etc, whether in celebration or support. This makes me wonder: Why do we hug, anyway? Luckily, the awesome team over at The School of Life did a video investigating the history of hugging, and how our concepts of hugs have changed over time.

Like most of our cultural norms, how we thinking about hugging has evolved throughout the course of human history. Even today, people definitely have different limits on what they're comfortable with: Some people may be OK with hugging someone on a first meeting, while others would reserve a hug for someone they have a close bond with. Some people freely hug their coworkers after a successful meeting, while others dread the office-group-hug. More so than discussing why some people like hugs and some people don't, this video investigates our overall understanding of hugging and its purpose over time — and why, psychologically speaking, we continue to crave and understand the importance of hugging, even into adulthood.

Here are a few key points about how the purpose of hugs changes over time. Scroll down to watch the full video for more.

1. We Receive Lots Of Hugs In Our Early Years

Originally, hugs were something a parent (or other caretaker) gave to a small child, someone under the age of four, when they were in a state of emotional distress or ill. Basically, people understood that very small children wouldn't be comforted with reason, so they gave hugs to show support and affection instead. At this point, hugging someone was similar to giving them a pat on the head or cradling them, as we still would do with a small child who is upset or sick.

2. We Receive Less Hugs During Adolescence

As we move toward adulthood, we're generally denied hugs — not necessarily 100 percent of the time, but more than when we were children. The idea is that, as we become more mature, rational beings, we don't require the same affection and reassurance shown through a physical act, like a hug or pat on the head, that we did when we were young. If you've ever heard people say that they need to "stop babying" their children as a reason for not giving them hugs, it probably goes back to the same root mentality that hugs are something for children who cannot otherwise comprehend their world and feelings.

3. We Crave Hugs When We Regress As Adults

So, why do we adults still want hugs? The psychology behind hugging says it's regressive, but not necessarily a bad thing. In our culture, it can feel like an embarrassment or a failure to admit we need some support or a shoulder to cry on, but in fact these feelings are normal. When we no longer get hugs from our parents (or caretakers) we replace them with hugs from friends, siblings, or even our friends in the office. On an innate level, we all relate to feelings of stress, fear, and disappointment, so we all relate to the desire to give or receive a hug at some point in our adult lives.

So, why is it important to hug one another? First of all, I think if you're uncomfortable hugging someone, you should never feel obligated or pressured to do so. However, if you find yourself in need of a hug, it's OK to express that, as long as you recognize that the person you're talking to may not want to give you a physical embrace. Expressing that you need support or comfort is a totally normal, healthy part of adult life, and nothing to be ashamed of. Sometimes support comes through talking out an issue or lending someone a listening ear, and sometimes it comes through the form of a hug.

You can check out the full video and learn more about the history of hugging below, thanks to The School of Life!

Images: Andrew Zaeh for Bustle; The School Of Life/YouTube (3)