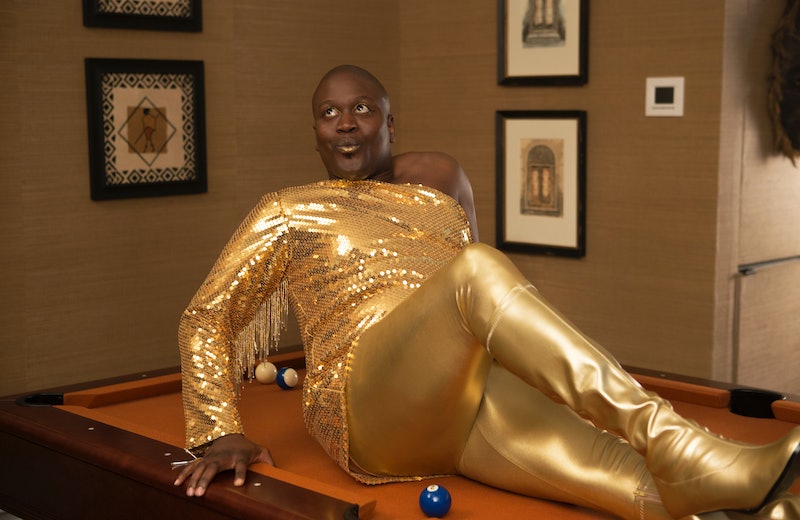 This Friday marks the blessed release of one of comedy's greatest contributions, the Netflix series Unbreakable Kimmy Schmidt. For those unfamiliar with the series (for shame), the show stars Ellie Kemper as a woman who was kidnapped by a cult leader (played by a phenomenal Jon Hamm) for 15 years. The premise sounds drab, but injected with Tina Fey's signature wit, the show is a bright spot in a sometimes drama-saturated Netflix world. One highlight: the tunes. Despite the tumult of Kimmy's background, she and her friends love to carry a tune or two. All of the great musical moments leave fans wondering if you can get the Unbreakable Kimmy Schmidt soundtrack anywhere, and I'm here to tell you that it doesn't really look like it. Whomp whomp.

Although I know that we all would have loved to have the likes of Titus Burgess's sweet, sweet falsetto singing "Peeno Noir" to ourselves so that we can warble along whilst draped in our own gold lame or sparkle tights, it looks like the closest we can get is just playing the scene over and over on Netflix. While we are doing that, let's take a look at some of the more wonderful harmonious moments from Unbreakable Kimmy Schmidt, shall we?

As Titus Andromedon matter-of-factly declares, the song serves as an ode to black penis. It also gives him an opportunity to shout out all of the greatest things in life — "caviar/Myanmar/mid-sized car" — while galavanting around Jacqueline and Julian Voorhees' tony townhouse dressed as Julius Caesar. The song was such an inspiration that it even spawned a real life Pinot Noir line.

The irresistibly catchy theme to the series was penned by none other than Tina Fey's husband, composer Jeff Richmond (who also did the awesome score for 30 Rock). The song, which features random positive epithets ("They're alive, damn it! It's a miracle!") spouted by a neighbor, is a send-up of/tribute to viral hits such as "Bedroom Intruder," according to Vanity Fair. Just try to get it out of your head, I dare you.

"Spiderman Too 2 Theme - Too Many Spidermen"

Before Titus wrote his own ditty, he performed this song and others in a doomed off-off-Broadway run by Myron Affleck (the third Affleck brother). The epic lyricism includes such turns of phrase as "And I will crush that Spiderman / And then that other Spiderman / And all the Spidermen / 'Til I'm the Spiderman."

Forever chasing fame, Titus finds it in a place that he doesn't expect: viral hit-ville. After he butchers an interview, he find himself the subject of his own little Internet ridicule. I guess it's true what they say — any exposure is good exposure, right Titus?

The infamous (fake) 1938 musical that I think all fans would love to see more of in the coming season. Do us a favor and bring on more Daddy's Boy, Kimmy Schmidt!

More like this
Christina Aguilera Had A Mini "Lady Marmalade" Reunion With Mya At LA Pride
By Jake Viswanath
“The Door Is Always Open” For Another 'Breaking Bad' Spin-Off, Says AMC Boss
By El Hunt
Emma Thompson, Lashana Lynch, & Stephen Graham Lead Netflix’s 'Matilda'
By Sophie McEvoy
Why You Loved 'One Tree Hill' So Much — And Still Do
By Sabienna Bowman and Radhika Menon
Get Even More From Bustle — Sign Up For The Newsletter