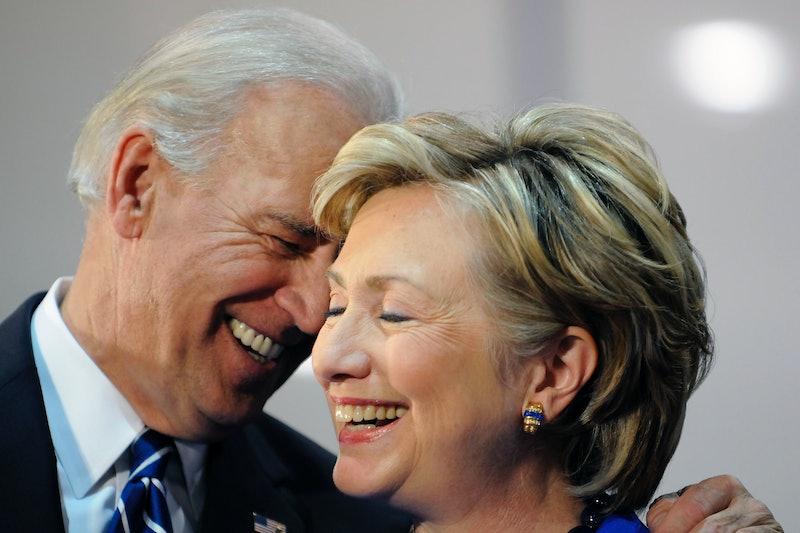 Vice President Joe Biden "would like to see a woman elected" president, he told Mic correspondent Antonia Hylton in an exclusive interview published partially Monday. But don't confuse Biden's dream for a female head of state with an endorsement. Despite defending Democratic presidential candidate Hillary Clinton's qualifications to command the desk in the Oval Office, Biden reiterated that his praise of Clinton wasn't an endorsement.

"Would you like to see us elect a woman in this country?" Hylton pressed.

"I would like to see a woman elected," Biden said, before his staff quickly jumped in to end the interview before the vice president, who's known for talking off the cuff, could say anything more. "The president and I are not going to endorse because we both, when we ran, said, 'Let the party decide,'" Biden continued, waving off his staff. "But gosh almighty, they're both qualified. Hillary's overwhelmingly qualified to be president."

President Barack Obama has been clear that he will not publicly endorse a candidate during the 2016 presidential primary. And Biden appears to be taking a page out of the president's book, opting, like Obama, to throw his support behind whoever ends up the Democratic candidate once the primary is over. Many have already attempted to cite Biden's interview with Mic as proof that he is sitting squarely in Clinton's corner, though unofficially. But Biden hasn't exactly been shy about sharing his thoughts on the 2016 presidential candidates, and it's important to note that they haven't always been flattering to Clinton.

In January, while speaking to CNN, Biden praised Clinton's competition, Sen. Bernie Sanders, for his authenticity and credibility on tackling income inequality, while saying he felt Clinton was "relatively new" to the issue. Biden also said Sanders was doing a "heck of a job" with his campaign and that he "never thought [Clinton] was a prohibitive favorite."

It wasn't the first time Biden appeared to be at odds with Clinton. In October, while announcing he would not pursue a presidential campaign from the White House Rose Garden, Biden took a few subtle shots at Clinton. "I don’t think we should look at Republicans as our enemies," he said, countering a quip Clinton had made regarding the GOP being the political enemy she's most proud of having made the week before during a CNN presidential debate.

In that same speech, Biden also spoke out against the big money's influence in politics, which could be perceived as directed at Clinton. "The middle class will never have a fighting chance in this country as long as just several hundred families, the wealthiest families, control the process."

It would be easy, but perhaps a bit oversimplified, to conclude that Biden's hope to see a woman sworn in as president equates to an under-the-table endorsement of Clinton. More likely Biden's comment stems from both a desire to see women shatter another glass ceiling during his lifetime and his belief that voters in 2016 are not taking a candidate's gender into consideration when heading to the polls.